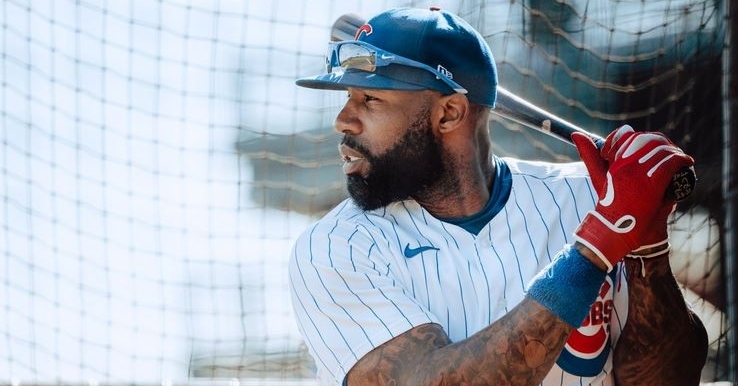 J-Hey getting some batting practice reps (via Cubs Twitter)

Hello, Cubs fans out there! I hope everyone is having a blessed middle part of the week and ready for the upcoming baseball season.

The Cubs looked fresh with their classic home uniforms on Tuesday:

Former Cubs pitcher Travis Wood talks about his grand slam against the White Sox in the latest 'Breakdown' video by Cubs Productions.

"I dream about hitting homers," Wood said in the following video.

"I dream about hitting homers."

Rizzo and Bryant are both 28-1 odds to win the National League MVP, according to BetOnline.ag.

Willson Contrereas comes in at 100-1 odds:

Check out this fun video of different Cubs players trying to spell different last names connected with the Cubs:

Great response by Cubs outfielder Ian Happ on what he needed from Costco:

when u accidentally send a major leaguer a text that totally wasnt intended for him @ihapp_1 pic.twitter.com/PzLEwxDl2X

Look for youngster Nico Hoerner to have a better offensive season in 2021 as he has been working on his stance this offseason:

Talking with Nico Hoerner today, he said he opened up his stance this offseason working with assistant hitting coach Chris Valaika. Says swing is the same, but felt like he needed to have a more athletic base. #Cubs

Speaking of Cubs photo day on Tuesday, check out a previous Cubs photo day back in 1982 with photos from Lee Smith, Leon Durham, Billy Williams and Jody Davis:

Cubs beat writer Carrie Muskat has a new book out called 'The Big 50: The Mean and Moments that made the Chicago."

Here is a picture of the Cubs book:

Hey #Cubs fans, just got copies of a book you might like: "The Big 50: The Men and Moments that made the Chicago Cubs " pic.twitter.com/FzI1jIfXKy

Ernie Banks with his beautiful smile in this 1972 throwback pic:

Ernie Banks never got to wear the new 1972 @Cubs #PolyesterPullover jersey and #Sansabelt pants in a real game. But he sure was happy to show them off. pic.twitter.com/A8soJk4p3x

Well look at who is freshening up for their first day of big league camp tomorrow: @BrennenDavis__. Those ST games in March just got a little more fun! pic.twitter.com/MdSLWraWbG

Marquee Sports Network personality Taylor McGregor spent some with with the Cubs groundskeeper to see what it takes to help keep Wrigley Field looking so majestic:

How does one maintain Wrigley Field?@Taylor_McGregor met with head groundskeeper @DanKiermaier to find out! pic.twitter.com/agfEJDYHBI

Cubs first baseman Anthony Rizzo won a 'Wrigley' for being the Cubs' cleanest player after giving hand sanitizer to a Brewers player in 2020.

We are honored to present the first-ever Wrigley Awards!

Rick Reuschel is very underrated. Both for his pitching skills and his #WarmupJacket under the jersey skills. @Cubs pic.twitter.com/tT1G6ki7mM

Finally another retro pic of former Cub Jose Cardenal who was a fan favorite during his 18-year pro career: