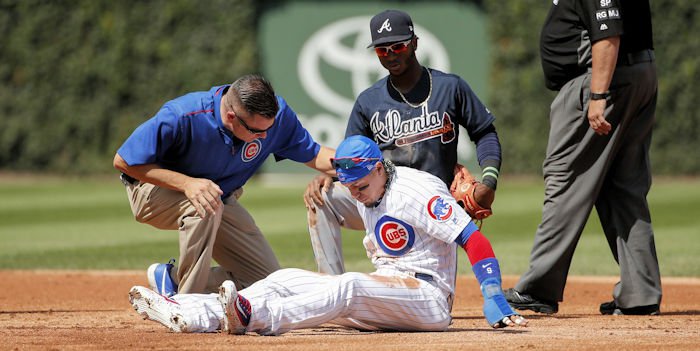 CHICAGO-- The Atlanta Braves salvaged the series finale at Wrigley Field avoiding a four game sweep winning 5-1 against the North Siders. It was a battle of two bullpen arms making starts for both clubs as Mike Montgomery went up against Max Fried making his first start of his major league career. Both pitchers went five innings in a rare game where the Cubs offense was stymied.

The scoring started with a sacrifice fly by Matt Kemp to put the Braves on the board in the first inning. Ian Happ tied the game on a solo shot in the bottom of the second. The big story line, however, was an attempted steal by Javier Baez that saw him slide head first into second. He would stay in the game for one batter in the top of the second before he was removed for Mike Freeman. It appeared as though the injury was a head injury and a possible concussion as Baez was indicating a possible vision impairment. No word on how serious the injury is.

There would be no scoring in the game until the 9th when Rio Ruiz knocked a two run single up the middle to tack on two more Braves runs. The Braves teams bullpen locked it down today allowing no scoring after the Fried’s. The Cubs left nine runners on base including stranding the bases loaded in the fifth. They still polished off a 6-1 home stand heading into the final month of the season.

Chicago will be back in action tomorrow in Pittsburgh as reigning NL Pitcher of the Month Jake Arrieta goes against Chad Kuhl in a game slated to start at 3:05 CT.