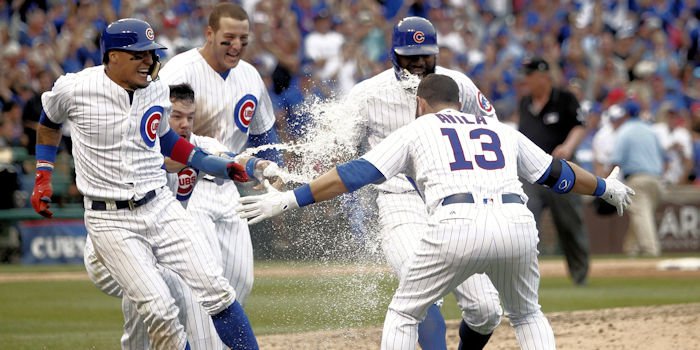 CHICAGO – With one swing of the bat, catcher Alex Avila ingratiated himself into Cubs nation, as his bloop single in the bottom of the 10th inning provided the Chicago Cubs with an impressive 6-5 victory over the Toronto Blue Jays at home. Capping off a three-game sweep, Avila's hit brought an end to a duel that featured a multitude of substitutions and multiple critical hits by veteran catchers. Scoring three runs in two separate innings, the Cubs were spotty offensively on Sunday but were good enough when it mattered most to walk away victoriously.

Albert Almora, Jr., proved to be the leading man for the Cubs on the day, as the young outfielder batted leadoff and had himself quite the game, going 2-4 with three RBI in the contest. All three RBI came on what proved to be the only significant hit of the first nine innings for the Cubs, a bases-clearing double to left in the third inning that put the Cubs up 3-0.

Albert Almora clears the bases with a double. pic.twitter.com/inQ6lAUCqh

With Blue Jays starting pitcher Marco Estrada struggling on the hill, the Cubs quickly loaded the bases at the start of the bottom half of the third inning, with everything going wrong for Estrada in the process. From hitting a batter to allowing Cubs pitcher Kyle Hendricks to reach first on a bunt, the Jays' veteran right-hander found himself in quite the predicament when Almora stepped up the plate. Thereafter, the Cubs' second-year outfielder accrued three of his 29 RBI on the year with his monumentous double.

Aside from allowing a double to former Cub Miguel Montero in the second frame, Hendricks fared well on the hill in the early goings. However, the Blue Jays began to chip away at the right-hander in the fourth, with slugger Justin Smoak leading off with a double and proceeding to score on a deep single by outfielder Jose Bautista. Leadoff doubles proved to be a major issue for Hendricks, as he gave up another, to right fielder Norichika Aoki, at the beginning of the fifth, setting the stage for Aoki to score and pull the Jays to within one run on an RBI grounder from right fielder Ezequiel Carrera later in the inning.

Perhaps inspired to perform his best against a club that rid itself of him for some rather terse, yet honest, postgame remarks earlier this season, Montero, who was booed by the Wrigley faithful while batting all game long, earned sweet revenge against the Cubs by going 2-4 with one run and one RBI on Sunday. His "eat-your-heart-out moment" came in the form of a solo shot into the bleachers beyond left-center field in the sixth inning, knotting the game up at three runs apiece. Of course, if Cubs starter Jake Arrieta had been the pitcher to give up the homer, rather than Hendricks, the moment would have been even more meaningful, for obvious reasons. But it was still a noteworthy moment, nonetheless.

Following Montero's moonshot, the game drastically declined in terms of offensive production, with both teams engaging in a relief-pitching war of attrition, complete with numerous and sundry defensive switches and substitutions. The Cubs had a chance to win in walk-off fashion in the bottom of the ninth, as right fielder Jason Heyward walked and then stole his third base of the year. However, unfortunately for Chicago, center fielder Jon Jay proceeded to lay down a woeful bunt thereafter that resulted in J-Hey being thrown out at third.

That missed opportunity temporarily haunted the Cubs, with Toronto utilizing a hard-fought, two-run inning to eclipse the Cubs and avoid a sweep. The Cubs put all of their marbles into one basket in the ninth, which could have proved costly, as closer Wade Davis's appearance in the ninth led to maligned middle reliever Koji Uehara entering the game for Chicago in the 10th.

Uehara gave up a leadoff single to 2015 American League MVP Josh Donaldson, who was next able to reach second on a steal attempt because of an errant throw by catcher Avila. Soon after, with two outs, Toronto center fielder Kevin Pillar batted a single to right that plated Donaldson from third and put runners on the corners. Uehara exited at that point, but his replacement, Justin Wilson, did not perform any better, as he walked two consecutive batters to provide Toronto with an additional run, putting the Blue Jays up 5-3.

The Cubs were granted a reprieve in the bottom half of the inning, however, as reliver Roberto Osuna of Toronto struggled mightily with his command, throwing two wild pitches, including one on a strikeout that enabled the batter to make it to first. The second wild pitch came with men on first and third for the Cubs, thus allowing left fielder Kyle Schwarber, the aforementioned lucky strikeout victim, to come in to score.

Osuna was able to gather himself after that, outing two consecutive batters, but the Cubs continued to do damage on the base path, as second baseman Javier Baez stole second after drawing a two-out walk, causing Osuna to revert back to his shaky ways. Following an HBP of Heyward, Osuna sealed his fate by giving up the walk-off, two-run single to Avila, bringing the grueling contest, which lasted nearly four hours, to a close.

Ending the 6-5 game in style, Baez scored the winning run by barely sliding under the tag at home and coolly popping up and onto his feet after being called safe by the umpire. With the much-deserved three-game sweep, the Cubs, who played remarkably well in all facets during that three-game stretch, moved to 66-57 and maintained their two-game lead in the National League Central. Despite his woeful appearance, Wilson received his first win since becoming a Cub, and, needless to say, Osuna was handed the loss to fall to 3-4 overall.

Avila, meanwhile, achieved his first starring role in a Cubs victory, as his late entrance as a defensive substitution proved to the winning move for Cubs skipper Joe Maddon. Making up for his throwing error, Avila solidified a three-run bottom of the 10th to give the Cubs the ultimate come-from-behind win in extra innings, making their late-season surge seem all the more magical and all the more destined to evolve into a World Series run.