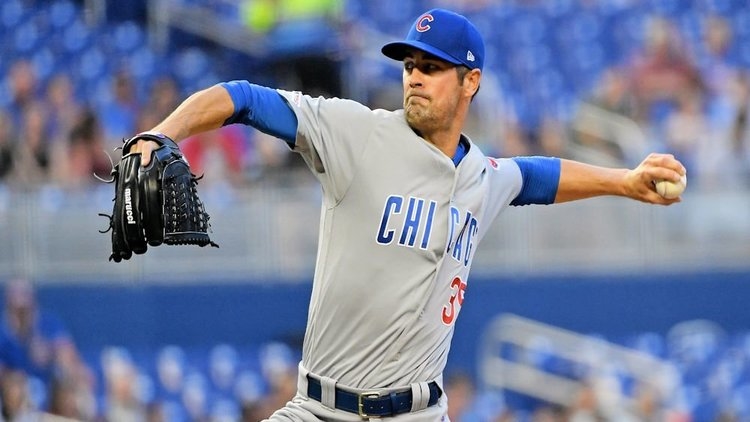 MIAMI, Fla. — Breaking out the brooms for the first time in 2019, the Chicago Cubs (8-9) shut out the Miami Marlins (4-15) for the second straight game on Wednesday and completed a 3-game sweep at Marlins Park, marking the North Siders' first sweep of the season. In the 6-0 win, veteran workhorse Cole Hamels wowed on the mound over the course of seven scoreless innings, as he fanned eight, gave up no walks and was taken for just three hits. Shortstop Javier Baez led the charge for the Cubs at the dish with a 2-for-4 output that included a solo home run.

Clutch hitting was a mainstay for the Cubs throughout the series, and it was on full display in game three, when all six of Chicago's runs came with two outs. A 2-out rally led to the Cubs breaking a scoreless tie in the second. Catcher Willson Contreras clubbed a 2-out double off Marlins starter Sandy Alcantara, which was followed up by an RBI single off the bat of second baseman Daniel Descalso.

The Cubs gained total control of the contest with four runs in the third. Baez drove in the first run of the frame with a single to right that plated third baseman Kris Bryant. Baez reached second base on the throw home and proceeded to score on an ensuing single to left-center by right fielder Jason Heyward. Descalso capped off the scoring barrage with his second big hit of the game, a 2-run double to deep left that made the score 5-0.

Javy’s 500th career hit is a clutch one!

Hamels retired 15 consecutive batters at one point and was able to escape a bases-loaded jam unscathed in the bottom of the seventh to put a bow on his marvelous start. Baez, who tabbed his 500th career hit on the aforementioned single, went yard for the sixth time this season on his 501st career hit. The 392-foot shot to right resulted in the eventual final score of 6-0.