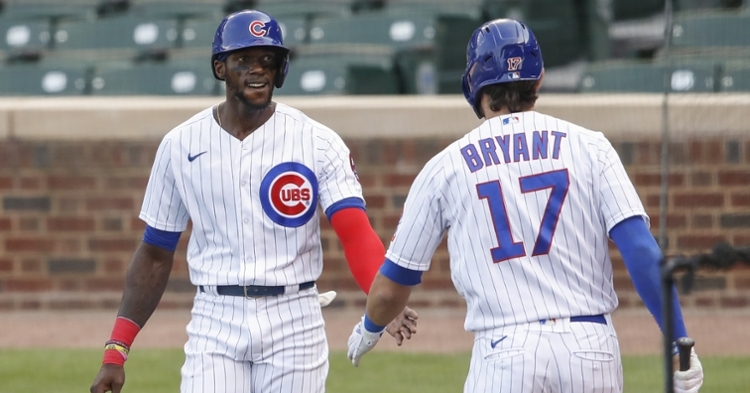 The Cubs wrapped up their season series versus the Cardinals with a 5-1 victory. (Credit: Kamil Krzaczynski-USA TODAY Sports)

The contest marked the final meeting of the regular season between the Cubs and the Cards. With the Cubs' 5-1 win included, the 10-game season series finished in a 5-5 tie. Javier Baez broke out of a hitting slump and went 3-for-4 at the dish for the North Siders. The Cardinals took 3-of-5 from the Cubs in the series but trail Chicago in the standings by 2 1/2 games.

T1: Kolten Wong started the game off with a single against Hendricks but was eventually picked off and tagged out in a rundown. Baez, who applied the tag on Wong, then ended the inning by making a great catch while leaning into the protective netting down the left field line. Paul Goldschmidt skied a popup into foul territory, and Baez gloved it.

B1: Cardinals starter Johan Oviedo gave up a leadoff double to Ian Happ that clanged off the basket atop the outfield wall. Happ then reached third via a Kris Bryant single. Anthony Rizzo grounded into a double play after that, but Happ was able to score on the groundout.

B2: The Cubs went down in order their second time up to the plate. Cameron Maybin nearly hit a home run, but, with the wind gusting in, his lined shot was caught on the warning track.

T3: Harrison Bader batted a two-out double that grazed the outstretched glove of Schwarber in left field. Wong then reached on an infield single that was bobbled by Baez at shortstop. Hendricks stayed composed and struck Tommy Edman out to escape the inning.

B3: Jason Kipnis hit a leadoff single that was followed by a walk of Happ. Kipnis is 7-for-15 so far this month. A fielder's choice resulted in runners at the corners with one out. Kipnis was plated by a sacrifice fly from Anthony Rizzo. Baez next hustled to first for his second leadoff single of the game, and Schwarber walked to load the bases. Willson Contreras grounded out to end the inning, leaving all three baserunners stranded.

T4: Following a leadoff base hit by Goldschmidt, a defensive shift spawned a 5-6-3 double play on a grounder hit toward second base. Bryant, who manned third base in the contest, was shifted to the right side of the infield, and he flipped the ball out of his glove to Baez at second after fielding it. Baez then fired over to Rizzo at first to complete the double play.

B4: Maybin tattooed a double to left and proceeded to come home on a bloop double off the bat of Kipnis that dropped down in shallow left.

T5: Hendricks sat the Cardinals down in order.

B5: A pair of defensive gaffes set the stage for Contreras to hit a two-run single. Baez could have potentially been credited with his third infield single when he reached as the leadoff man, but Cardinals third baseman Matt Carpenter was charged with a throwing error after making a throw that pulled Goldschmidt off the bag at first. Wong then committed a much more egregious throwing error after fielding a grounder from Contreras and airmailing a routine throw to second, thus preventing a double play from coming to fruition. With runners at second and third, Contreras drove a pitch into left that ushered both baserunners home. Oviedo was removed later in the inning, having given up five runs on eight hits and three walks.

T6: Nico Hoerner was inserted into the game as the second baseman at the start of the inning, and he and Baez teamed up for a smooth 4-6-3 double play that ended the half-inning.

B6: Happ walked, and Baez singled to right. Both were left on base, though.

T7: Goldschmidt began the seventh with a single, and Brad Miller then grounded into a fielder's choice. Baez froze after stepping on second for the first out, potentially spoiling a double play. Paul DeJong hit a single after that, and a Matt Wieters base hit plated Miller. Carpenter grounded into a 4-6-3 double play to get Hendricks out of the inning.

On the board! Wieters drives in Miller to light a fire here in the 7th inning. #STLCards

B7: A leadoff walk of Contreras gave way to a double play that Victor Caratini grounded into.

B8: Bryant singled with two outs, but the Cubs did not add to their lead.

T9: Rowan Wick tossed a three up, three down ninth to lock up the win. Hendricks received the winning decision, becoming 5-4 overall, and Oviedo dropped to 0-2 overall by way of the losing decision.

Up Next: Next on the docket for the Cubs is three-game series at home against the Cincinnati Reds (18-23). The North Siders lead the season series versus the Reds 4-3. Cubs right-hander Alec Mills (3-3, 5.50) will face off against Reds right-hander Tyler Mahle (1-1, 3.90) in the Tuesday, Sept. 8, series opener. The opening pitch is scheduled for 7:15 p.m. CDT, but there is a chance for scattered thunderstorms at Wrigley Field throughout the warm, windy night.

Kyle Hendricks dazzles as the #Cubs take the series finale!