NOTE: Both starting pitchers were having issues with the balls not being scuffed enough at the start of the game, affecting their pitches.

T1: (ARI RHP: Koch) Ben Zobrist would strikeout to start the game, but Kris Bryant would hit a single to right. Anthony Rizzo would hit into a 4-6-3 double-play to end the inning.

B1: Kyle Hendricks had a little bit of a rough start, issuing a leadoff walk, then back-to-back singles, allowing a run to score, before finally retiring a batter by strikeout. Hendricks would limit the damage by inducing a grounder that would turn into a 4-6-3 double-play (Bote-Baez-Rizzo). Cubs trail 1-0.

T2: (ARI RHP: Koch) Javier Baez would leadoff with a groundout, but Jason Heyward would walk. Taylor Davis would ground to first, but Heyward would make a mental error, causing him to be thrown out at third on an unusual 3-5 double play.

B2: Hendricks would start the frame with a groundout, but then give up a double to the next batter. After a strikeout, John Murphy would steal third, but a grounder to David Bote would end the inning without allowing a run. Cubs down 1-0.

B4: Hendricks would issue a leadoff walk, followed by a groundball to Bryant, resulting in a force at second. A single to center would end The Professor’s day, being replaced by Tyler Chatwood. Chatty would give up a single but would retire the next two on flyouts to Heyward, to hold the D-Backs at bay.

T5: (ARI RHP: Koch) Happ’s groundout would start the inning, but Bote would add to the lead with an opposite-field homer to right. Tyler Chatwood would hit an infield single, but Zo would hit into an inning-ending 3-6-3 double play. Cubs lead 4-1.

B5: Chatwood, throwing mid-90s, would open the frame with a strikeout, follow that with a groundout, then end it on a bizarre play: Marte lined at Bryant who deflected it to Baez, who caught it in the air.

T6: (ARI RHP: R. De La Rosa) Bryant would a long flyout to start it, followed by Rizzo’s walk and Javy’s single to center. Rizzo would get caught trying to take third on a delayed steal, but Heyward’s walk would keep the inning alive. Baez took third on a wild pitch, then scored on Davis’s single to right (Heyward to third). LHP Miguel Aguilar would replace De La Rosa, then immediately issue a single to Happ, scoring Heyward. Aguilar injured himself on a pitch to Happ, and was replaced by RHP Bud Jeter, Taylor Davis would also be lifted for a pinch-runner (Levi Jordan). Bote’s single would score another run before Mark Zagunis would strikeout to end the inning. Cubs lead 7-1.

B6: Mike Montgomery would open the frame by issuing a leadoff single, then walk the next man, but the next three would go down in order on a line drive and a pair of groundouts.

B7: Monty, back for a second inning, retiring the first two on a pair of groundouts, but would give out a double, before striking out Almonte to end the inning.

T8: (ARI RHP: Hirano) Chesny Young would draw a leadoff walk, followed by a pair of strikeouts from Connor Myers and PJ Higgins. The inning would end on Wynton Bernard’s groundout. Cubs lead 7-1.

B8: Righty, Allen Webster would pitch the eighth, allowing a leadoff double, but a groundout, flyout and called third strike would leave a runner stranded, and the D-Back scoreless in the inning.

T9: (ARI LHP: Chafin) Vimael Machin would reach on a catching error by the first-baseman (Tomas), but Johnny Field’s flyout, Jared Young’s groundout, and Christian Donahue’s strikeout would end the day offensively for the Cubs.

B9: Despite a two-out walk, southpaw, Jordan Minch, would close it out for Chicago, with a groundout and a pair of strikeouts. Final score: Cubs-7; D-Backs-1.

The Cubs will return home to Sloan Park tomorrow to host the Rockies, followed by an off-day on Monday, then split-squad actions against a Mariners’ minor league team (2:05 PM Central at Sloan Park) and then the Royals (8:05 PM Central at Sunrise Stadium). 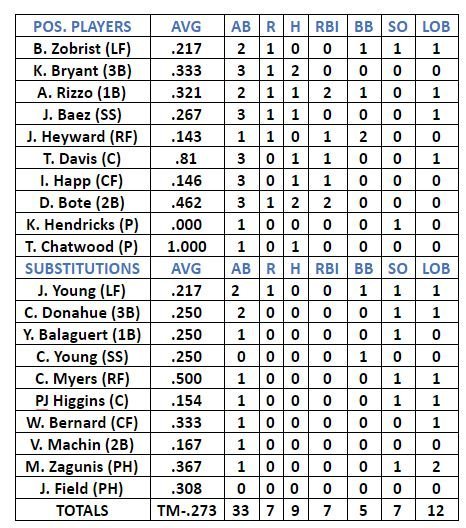