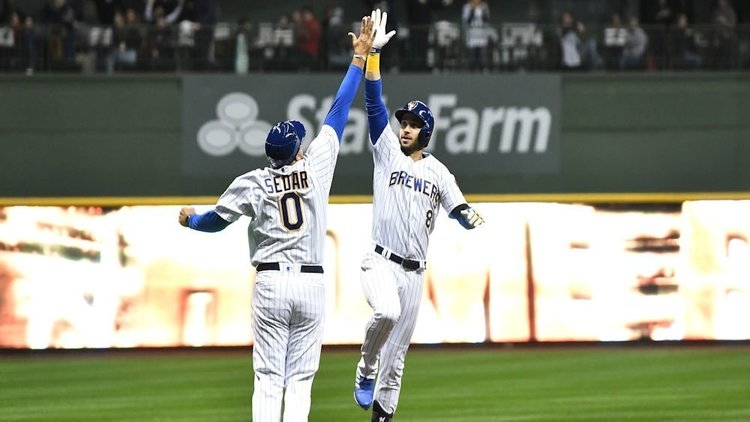 The Cubs had no answers for Brewers hitting on Friday. (Credit: Michael McLoone-USA TODAY Sports)

MILWAUKEE, Wis. — In a game that never really felt close, the Milwaukee Brewers (7-1) kept the Chicago Cubs (1-6) at bay, despite a late rally by Chicago, and increased the North Siders' losing streak to six. The first contest in a 3-game set at Miller Park saw a combined eight home runs hit and a total of 27 hits tallied. Cubs starting pitcher Jose Quintana had a miserable outing, as the lefty allowed eight runs to score in just three innings of work and gave up three of the Brewers' five dingers. Ultimately, the Cubs lost 13-10, falling behind Milwaukee by 5 1/2 games. That marks the first time since July of 2017 that the Cubs have been that far out of first place in the National League Central.

Entering Friday with the best batting overage and OBP in the majors, the Cubs also sported the worst ERA and WHIP in MLB. That polarization between the hitting and pitching was on full display against the Brewers, with Milwaukee scoring at will from start to finish and not giving Cubs batting a chance to catch up. An RBI double by Christian Yelich and an ensuing RBI single by Ryan Braun provided the Brew Crew with a 2-0 lead in the first frame that it did not relinquish. Braun smacked a 3-run homer in the next inning to put Milwaukee up 6-0, and the Brewers hit back-to-back solo shots in the third to put a bow on Quintana's forgettable evening.

Infielder Daniel Descalso continued to prove his value for the Cubs, as the offseason acquisition went 3-for-5 and ended Chicago's scoreless start to the game with a 421-foot bomb into the upper deck beyond right field in the top of the fourth. A 3-run bomb, Descalso's debut jack as a member of the Cubs was followed by an RBI double from Kris Bryant later in the inning.

Milwaukee went on to tab two more home runs, as Cubs relief pitching continued to struggle. After trailing 13-5 at the onset of the eighth, the Cubs produced a valiant comeback attempt that was sparked by outfielder Jason Heyward's first homer of the year. Earlier in the matchup, Cubs catcher Willson Contreras clubbed his first round-tripper of 2019, and Heyward did the same via a 2-run shot with two outs in the eighth.

Chicago then picked up three more runs by way of small ball in the ninth but came up short in the 13-10 defeat. The loss served as the second occasion this season that the Cubs scored 10 or more runs but failed to win. Also of note, the Lovable Losers have not given up fewer than six runs since Opening Day, when they were taken for four runs.