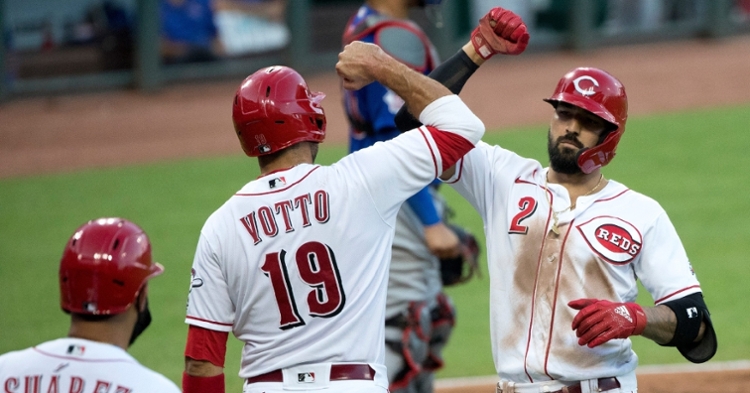 CINCINNATI — A late-inning offensive surge by the Chicago Cubs (4-2) was not enough to bring the North Siders back from a 9-0 deficit against the Cincinnati Reds (2-4). While Reds ace Sonny Gray dominated in a start that was arguably ended too soon, Cubs ace Kyle Hendricks, who pitched a complete game shutout on Opening Day, struggled.

The highlight of the night for Chicago was a defensive feat, as the Cubs turned their first triple play since 1997. Former Cub Nicholas Castellanos provided the Reds with a big lift via a grand slam that was part of a seven-run fifth inning for Cincinnati. As for the Cubs, they produced a five-run seventh inning that was aided by Gray's departure. The Reds hung on, though, and won 12-7 at Great American Ball Park.

T1: A hit by pitch generated contention in the top of the first. For the fifth time on the season and 150th time in his career, Anthony Rizzo was beaned. Gray was not pleased with Rizzo making no effort to avoid the pitch, which grazed Rizzo's leg, and he let Rizzo hear about it while walking back to the dugout.

GRAY K's Baez and Schwarber to end the 1st and then lets Rizzo know what he thinks about him not getting out of the way of that pitch that put him on #Reds pic.twitter.com/nODAFd1mrS

B1: Hendricks tallied two strikeouts in a scoreless first frame.

B2: Former Cub Nicholas Castellanos hustled for an infield single but then decided to hustle a bit too much by attempting a woeful steal attempt. Cubs catcher Willson Contreras threw Castellanos out by a mile and grinned about it afterward.

T3: Gray continued to dominate, striking out the side in the third.

B3: Hendricks gave up a pair of two-out singles before Joey Votto grounded out to end the inning.

B4: After walking Eugenio Suarez, Hendricks gave up his first critical hit of the season, as Mike Moustakas hammered a two-run homer. The 382-footer out to right broke the scoreless tie. After that, Kris Bryant laid out for an impressive diving catch at the third baseline to rob Castellanos.

T5: With two outs, the Cubs finally recorded a hit off Gray, with Ian Happ drilling a double to deep left-center. Happ was left stranded, though.

B5: The leadoff man hit a single, and, two at-bats later, Shogo Akiyama clubbed a ground rule double to center. After walking a batter to load the bases, Hendricks was pulled and replaced by Rex Brothers. Castellanos did some major damage to his erstwhile squad by taking Brothers deep for a 420-foot grand slam. Not long after that, Nick Senzel lifted a solo bomb into the left field bleachers. Both Senzel and Moustakas missed the previous two games of the series with COVID-19-like symptoms. Thankfully, they each tested negative.

T6: Gray struck out the side for the second time on the evening.

B6: In the midst of the blowout, the Cubs made several lineup changes prior to the bottom of the sixth. Brothers and James Norwood combined to pitch a scoreless inning.

T7: Gray was taken out with two away in the seventh. A throwing error committed by Suarez led to the Cubs sporting a bases loaded opportunity when Gray walked a batter and was subsequently removed. Brooks Raley entered in his wake and hit a batter to force in a run before giving up a two-run single to Nico Hoerner and a two-run double to Bryant.

B7: The Reds answered the Cubs' five-run inning with a three-run inning. Dillon Maples struggled in his relief appearance, but a passed ball suffered by catcher Josh Phegley and a fielding error suffered by Bryant did not help matters. A run scored on the passed ball, and another scored on a Senzel double. Maples walked in a run, leading to a pitching change, and the Cubs' first triple play since 1997 then came to fruition. Making up for his aforementioned error, Bryant appeared to lay out and catch a liner off the bat of Akiyama. He then stepped on third and fired to first for the 5-3 triple play. While replays indicated that the liner skipped before Bryant caught it, the play was not reviewable, so the Reds were unable to challenge.

B8: Duane Underwood Jr., who was on the mound for the triple play, sat the Reds down in order in the eighth.

T9: For the second night in a row, David Bote went yard for the Cubs. His 418-foot two-run jack plated Hoerner, who singled earlier in the inning.

Up Next: The series finale at Great American Ball Park will feature a noteworthy pitching matchup between Yu Darvish (0-1, 6.75) of the Cubs and Luis Castillo (0-0, 1.50) of the Reds. Darvish did not fare well in his first start of the season, so he will look to right the ship on Thursday, July 30. The first pitch is scheduled for 5:10 p.m. CDT.