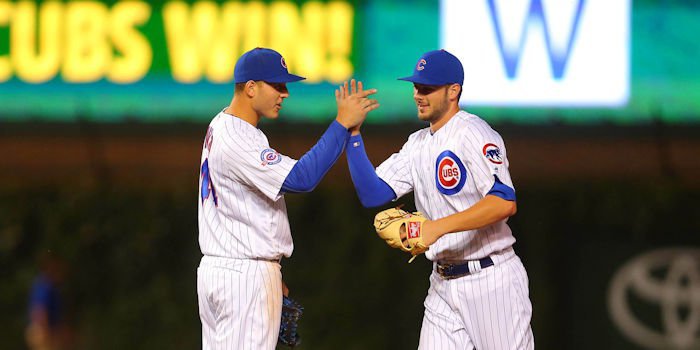 CHICAGO – The Chicago Cubs kick off the next homestand at Wrigley Field by hosting the second half of the Crosstown Cup series vs. the Chicago White Sox. The city rivals visit July 27-28, followed by an Interleague matchup with the Seattle Mariners July 29-31 and a series with the Miami Marlins August 1-3.

In an effort to recognize police and civic leaders who serve Chicago’s communities, the Cubs have partnered with the Chicago Police Department and Chicago White Sox to support the CHI-RISE initiative at both Wrigley Field and U.S. Cellular Field. Both teams donated custom CHI-RISE shirts with Cubs and White Sox logos to promote unity and collaboration in making our city safe. Chicago Police officers are distributing the shirts pregame in the communities near each ballpark during the Crosstown Cup series.

The Cubs have partnered with The Field Museum in Chicago to host traveling replicas of their Terracotta Warriors exhibit on the Right Field Porch of the Budweiser Bleachers July 27-29. The replica statues have appeared throughout the City of Chicago this month to promote the China’s First Emperor and his Terracotta Warriors exhibit on display at the Field Museum through January 8.

As fans visit Wrigley Field this homestand, they will be able to purchase official Cubs merchandise at a new temporary retail location just north of the Wrigley Field Ticket Office at the corner of Addison and Clark streets. The Cubs Store is scheduled to open by game time July 27, with hours of operation from 10 a.m. to 7 p.m. Monday through Friday; 10 a.m. to 8 p.m. on Saturdays; and 10 a.m. to 6 p.m. on Sundays. The Cubs Store will open at 9 a.m. on gamedays and remain open for one hour following the last pitch of night games. Store hours are subject to change.

Ticket availability is limited for each game this homestand. Fans can purchase tickets at www.cubs.com or 800-THE-CUBS (800-843-2827). Highlights of the homestand follow.

Up to the first 10,000 fans attending the conclusion of the Crosstown Cup series Thursday, July 28, will receive a Limited Edition T-shirt presented by Express.

Up to the first 10,000 fans will receive a Cubs Misting Fan presented by Comcast SportsNet Saturday, July 30.

On Sunday, July 31, up to the first 5,000 kids 13-and-younger will receive a Cubs Youth Batting Practice Pullover presented by Bigelow Tea.

Up to the first 10,000 fans Monday, August 1, will receive a Kris Bryant "Rookie of the Year" Award Bobblehead presented by Wintrust Community Banks.

The homestand concludes Wednesday, August 3, with up to the first 10,000 fans receiving Cubs Graphic Socks presented by StubHub.

A member of the electric pop band, Major Lazer, will throw a first pitch Saturday, July 30.

Members of the 1960s American pop band, The Buckinghams, will sing the national anthem Tuesday, August 2.

Hot Doug’s continues its rotating sausage selections at Platform 14 in the Budweiser Bleachers, with two unique new additions this homestand. The Brooks Kieschnick is a spicy Thai chicken sausage with spicy mayonnaise and toasted coconut. The Gary Varsho is an alligator and pork sausage with Cajun remoulade and shredded Swiss cheese. Returning is the Champ Summers, with a Vienna Beef spicy polish sausage, Goose Island beer mustard and crispy fried onions.

On Friday, July 29, Cubs manager Joe Maddon will continue his “Respect Community” postgame press conference charity T-shirt initiative by representing Misericordia Heart of Mercy, a Cubs Charities grantee that provides a continuum of care and network of services for people with developmental disabilities.

Prior to the game Monday, August 1, the 2016 class of Cubs Scholars will be recognized on the field alongside their front office mentors. The team recently held a signing ceremony for the incoming 2016 Cubs Scholars class and celebrated the college selections of the 2015 graduate class. The Cubs Scholars Program offers quality scholarship and financial contributions for Chicago inner-city high school students, coupled with a program designed to promote academic achievement and encourage post-secondary educational advancement.

During Monday’s pregame ceremony, Legacy Partner Nuveen will present a $10,000 check to Cubs Charities in honor of catcher David Ross hitting his 100th career home run off the company’s new sign down the left field line this season. Nuveen is offering another $10,000 for the next time a Cubs player hits the new fixture, which is a likely target, as it rests just inside the left field foul pole behind the Budweiser Bleachers.

· Promotion: Limited Edition T-shirt presented by Express, up to the first 10,000 fans

· Promotion: Cubs Misting Fan presented by Comcast SportsNet, up to the first 10,000 fans

· Promotion: Kris Bryant "Rookie of the Year" Award Bobblehead presented by Wintrust Community Banks, up to the first 10,000 fans

· Promotion: Cubs Graphic Socks presented by StubHub, up to the first 10,000 fans