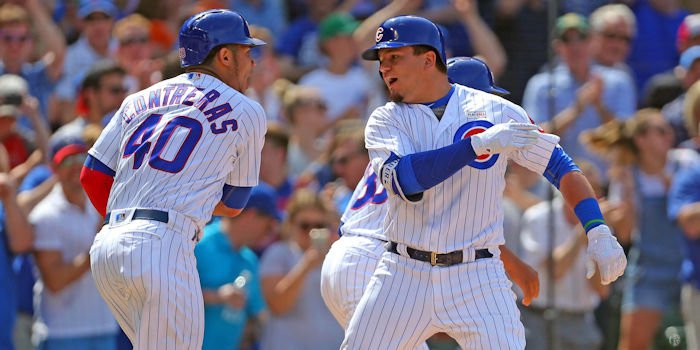 CHICAGO - Dropped to the ninth position in the lineup, a struggling Kyle Schwarber hammered a go-ahead grand slam in the 7th inning to propel the Cubs to a 5-3 win over the rival St. Louis Cardinals on Saturday.

The blast to left centerfield was Schwarber's first career grand slam and received a curtain call from the euphoric fans at Wrigley Field. Cardinals manager Mike Matheny will be second-guessed for not taking out starter Mike Leake (5-4) after almost 100 pitches, but Schwarber has been mired in a season-long slump.

Hector Rondon (1-1) picked up the win for the Cubs after pitching a scoreless seventh inning. Starter Jon Lester did not have his best stuff but was effective for the Cubs, pitching six innings allowing three runs.

Cubs shortstop Javy Baez hit a solo home run in the third inning that provided the only other run for the Cubs on the day. The home run was Baez's ninth on the season.

However, the funniest play of the game was when veteran Jon Lester picked off Tommy Pham in the fifth inning. It was a historic pickoff because of Lester's propensity not to ever throw to first base because of his erratic throws there. Pham was 19 feet away from the first base bag and was daring Lester to pick him off. Lester did just that with a soft lob toss and then glared at the Cardinals bench in pure joy.

Up 3-1, in the seventh, the Cubs made a comeback. The bottom of the order did all of the heavy lifting as Heyward singled, Contreras singled, and Jon Jay was hit by a pitch which loaded the bases for Schwarber. Schwarber’s struggles at the plate have been well-documented, and he was hitting just .165 coming into the game. No matter. Schwarber did what he does best as he put the Cubs on top for good with a grand slam that flew just over 400 feet to dead center.

Wade Davis finished out the games without any fireworks, and the Cubs have once again come within a game of .500. It is lucky that the rest of the division isn’t all that good because the Cubs would have a hard time catching up, but it is still anyone’s division at the moment.