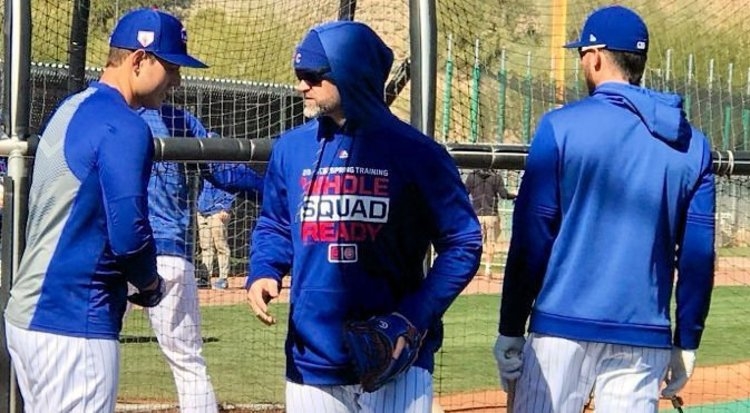 Observations from Mesa: CubsHQ correspondent, Kassie Hager has attended each day of spring training and has made a few observations that we wanted to share. (1) KB, Rizzo, and Heyward have been hitting bombs out of the park and are generally hanging out a lot with Davis Ross. (2) Javy Baez spending all of his time at short with Russell, while Happ and Descalso have mainly covered second. (3) Addison Russell is generally by himself and appears sad, overall. (4) Kyle Schwarber and Albert Almora, Jr. seem to have their own little clique, as the two have been inseparable. Meanwhile, Schwarber and Rizzo seem to have the right attitudes, as neither has been seen without a smile and both are always laughing and having fun.

Own it now: With the spring training opener just two days away, the Cubs released a short hype video.

Throwback Thursday: A younger Javy Baez doing what he does best:

Today: Mariners vs. Athletics- Postponed due to rain after 1-1/2 innings with the visiting Mariners up 5-0.

Tragedy: Boston Globe baseball reporter Nick Cafardo has died at age 62. In part, an article from the Boston Globe reads, “Cafardo’s love of baseball and commitment to his craft compelled him to report to JetBlue Park, the spring training home of the Red Sox, on one of his rare days off. He was apparently stricken by an embolism at the park, and members of the Sox medical team were unable to revive him.” We CubsHQ would like to extend our condolences to the Cafardo family.

Universally beloved. One of the greats in the business. So sad. https://t.co/6qTckWFjXT

Giants: SF has added right-hander Nick Vincent on a minor-league deal. Vincent will join the team for spring training.

Mariners: For all of the wheeling and dealing this year, one would almost wonder if Jerry Dipoto would even have a team to field: They do. In a rain-shortened inning-and-a-half game this afternoon, the visiting Mariners were manhandling the Oakland A’s. Seattle took a 2-0 lead in the top of the first, then followed that up with a three-run top of the second, before Mother Nature took over. No word yet if the game will be continued at a later date.

Twins: In their efforts to continue rebuilding, the Twins are now looking at free-agent utility-man, Marwin Gonzalez.