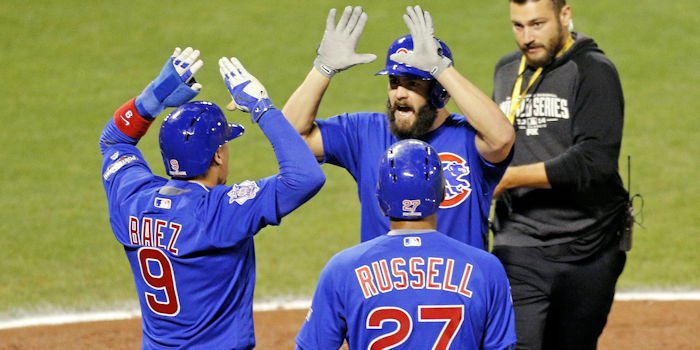 SAN FRANCISCO -- I really can't describe what I just saw. The game of baseball can be so amazing with its ebb and flow and emotional ups and downs. I saw an incredible homer by a pitcher. A blown save by an elite closer that throws 103 MPH. An MVP candidate hitting a homer to tie the game when the game was all but over. This game had it all including being the longest postseason game in Cubs history.

The battle of two of the best pitchers in the majors with Jake Arrieta vs. Madison Bumgarner was also on display on Monday night as the San Francisco Giants were eventually victorious 6-5 in thirteen innings.

The game was full of many memorable moments but the key inning was when Aroldis Chapman came in the eight-inning for a chance for a six-out save but Conor Gillaspie had other plans as he hit a triple to score Brandon Belt and Buster Posey to give the Giants the lead at 4-3. It was the first triple a lefty has ever hit against Chapman. The Giants added an insurance run against Chapman to pull away at 5-3.

However, it was the power hitting ability of Jake Arrieta that stole the show early on and crushed the hearts of Giants fans. Arrieta's showed his prowess at the plate with a three-run bomb in the second inning to stun the Giants faithful. The home run's exit velocity was 106.2 MPH, and it was fifth hardest hit home run by a pitcher in the Statcast era. It was the first home run out of 139 in his career that Bumgarner had given up to an opposing pitcher.

Before the home run, Bumgarner had a streak of 24 straight scoreless postseason innings. Bumgarner was taken out after 101 pitches after the fifth inning giving up seven hits, three runs, a walk, and four strikeouts. Only 66 of his 101 pitches were for strikes.

The Cubs pitchers had six RBIs during the series and were the first team with multiple homers (Travis Wood) by pitchers in a single series postseason series since the 1924 New York Giants. Don't forget Kyle Hendricks also had two important RBIs in game two.

The six RBIs tie the record for most RBIs by a team's pitchers (1958 Braves, 1970 Orioles) in a postseason series according to ESPN Stats.

Before the game started on Monday night, the Cubs pitching staff had a 1.00 ERA, walked none, struck out 12 in the first two games of the National League Division Series.

Arrieta continued that stellar play with his six innings of work scattering six hits, two runs, a walk, and five strikeouts. In his last seven starts in California, he has a 0.53 ERA in 51 innings pitched giving up only 21 hits and ten walks with 49 strikeouts.

In his last start in the regular season against the Pirates, he gave up a season-high seven runs and ten hits.

Cubs relievers Pedro Strop and Travis Wood combined for a 1-2-3 7th inning but the costly 8th inning was too much for the Cubs to overcome.

Kris Bryant hit a two-run homer in the 9th inning to tie the game at 5-5 and then Albert Almora Jr. made one of the defensive plays of the year for the Cubs to escape the 9th inning all tied up.

Joe Panik had a RBI double in the 13th inning to give the Giants the 6-5 win.

RHP John Lackey will be on the mound against LHP Matt Moore in San Francisco on Tuesday at 7:40 CT.