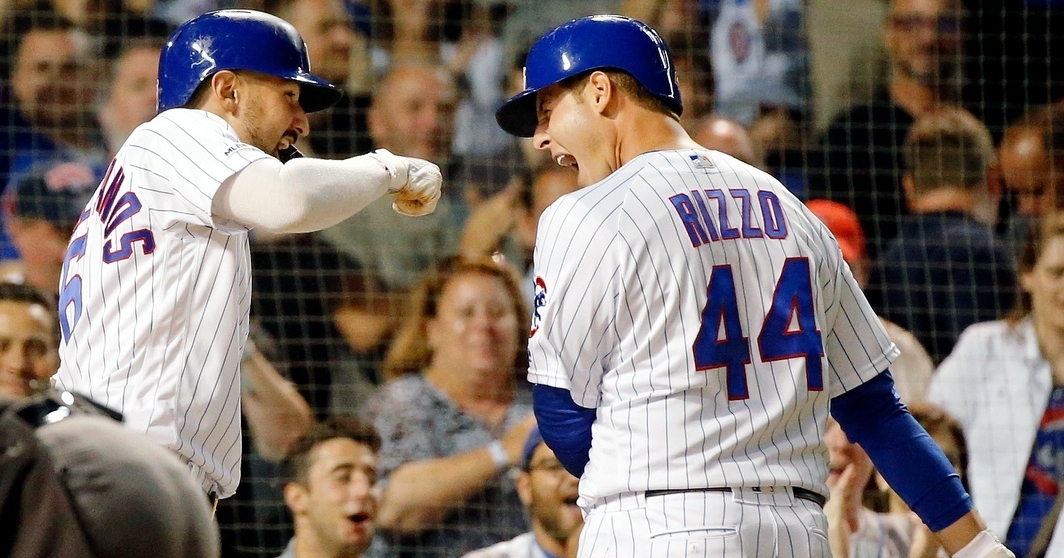 Anthony Rizzo provided the Chicago Cubs with a boost in his triumphant return to action, but the Cubs were ultimately unable to defeat the St. Lous Cardinals. (Credit: Jon Durr-USA TODAY Sports)

CHICAGO — In their desperation, the Chicago Cubs (82-71) were able to come alive at the plate with the game on the line and score three runs in the bottom of the ninth to force extra innings on Thursday. However, the St. Louis Cardinals (86-67) responded by scoring a go-ahead run soon afterward, leading to the Cubs losing in 10 innings for the second night in a row. The series opener at Wrigley Field followed a series of surprising injury revelations surrounding the Cubs, with multiple returning players suiting up for the North Siders in their 5-4 loss.

Shocking the baseball world, Anthony Rizzo, who was expected to remain in a walking boot for the rest of the week while battling a severe ankle sprain, was announced as a starter not long before the game began. Better yet, he hit leadoff for the Cubs and scored their lone run outside of the ninth frame. Furthermore, Javier Baez was stunningly ruled to be eligible to pinch run and take part in certain other baseball-related activities by a hand specialist on Thursday afternoon. The hairline fracture in Baez's left thumb was supposedly going to keep him out of action for the rest of the regular season, but, sure enough, Baez entered Thursday's game as pinch runner and donned a protective mitt on his left hand.

Cubs closer Craig Kimbrel was activated off the injured list earlier in the day after enduring a bout of elbow soreness. Unfortunately for Kimbrel, his return to the mound did not go particularly well. Also of note, Addison Russell was activated off the concussion list before the game but did not receive any playing time for Chicago. The Cubs mustered just three hits through the eighth inning, and one of them was a game-tying home run off the bat of Rizzo. Inciting a roar from the Bleacher Bums, Rizzo smoked a fastball out to left-center for a solo blast in the bottom of the third. Other than that, Cardinals starter Jack Flaherty was dominant in his eight innings of work, in which he struck out eight batters.

Kyle Hendricks started on the mound for the Cubs and was not at his best, as he was taken for four runs on eight hits and one walk in 5 1/3 innings pitched. Possibly out of frustration, Hendricks even had a lengthy conversation with the home-plate umpire after striking out to end an inning, thus resulting in him being late with his warm-up tosses. Hendricks fanned six on the evening, but he departed the game with the Cubs trailing 4-1. The Redbirds loaded the bases with no outs in the top of the third, but a run that scored when Dexter Fowler hit into a double play was the sole run recorded by the Cardinals in the inning.

A leadoff triple by the Cardinals' Tommy Edman in the top of the fifth gave way to an RBI single from Harrison Bader. In the top of the sixth, Paul Goldschmidt tabbed a leadoff double and was eventually scored on an RBI single by Yadier Molina, which sparked a pitching change. Bader doubled and ushered a run across with two outs in the sixth, putting the Cardinals ahead 4-1. The Cubs' next decent scoring opportunity came when Kyle Schwarber reached third base with one out in the bottom of the seventh. Schwarber ruined his auspicious situation, though, by allowing himself to get tagged out in a rundown after straying too far from the bag when a comebacker was hit.

Cardinals closer Carlos Martinez struggled in the bottom of the ninth, and the Cubs were given new life when, with one out, Ben Zobrist slapped an RBI double down the right-field line with one out. Baez proceeded to pinch run for Zobrist, and he reached third on a nubber hit by Willson Contreras for an infield single, which scored the second run of the inning. Jason Hayward followed that up by smacking a burner between first and second. Edman made a diving stop and threw Heyward out, but Baez scored with ease on the play. The Cubs' 3-run turnaround was spoiled with Kimbrel pitching in the top of the 10th, as Matt Carpenter swung at the first pitch thrown to him and hammered a 431-foot no-doubter beyond center field.

Carpenter's dinger, which occurred with one out, proved to be the game-winning hit, and it prevented the Cardinals letting what seemed like a surefire win at one point slip away from them. The Cubs went down in order in the bottom of the 10th, thereby locking up the 5-4 outcome and giving Chicago its third straight loss. As a result of their extra-inning triumph, the Cardinals moved to four games up on the Cubs in the standings. Additionally, the Cubs fell to one game behind the Milwaukee Brewers (83-70) in the race for the second wild-card spot, marking the first time since late April that the Cubs have been completely out of playoff position.