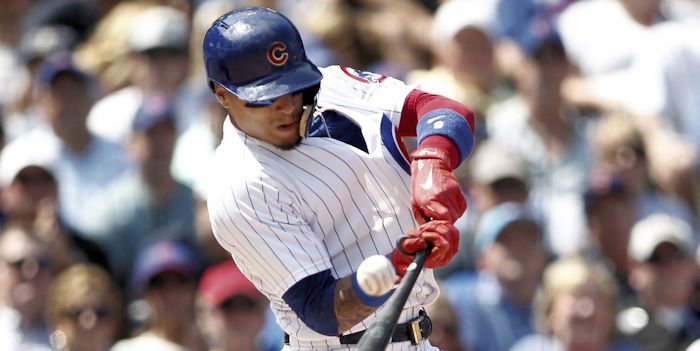 CHICAGO -- The Chicago Cubs against the Blue Jays game on Friday afternoon looked like a reunion at Wrigley Field with former Cubs players Darwin Barney and Miguel Montero playing starring roles for the American League team. However, The North Siders won 7-4 against the Blue Jays with a solid pitching performance by Jake Arrieta. The Cubs are now 8-1 in their last nine interleague games.

In case you were wondering, Montero was booed during his first at-bat back after his controversial comments about Jake Arrieta.

The Blue Jays started the scoring with a RBI single by Steve Pearce to make it 1-0 in the top of the first inning.

Cubs first baseman Anthony Rizzo had a RBI single on a line drive to left field to score Almora Jr. and Kris Bryant to give the Cubs a commanding 5-1 lead.

Jake Arrieta continued to impress of late as went 6.1 innings giving up six hits and only one run, two walks, and six strikeouts to lower his season ERA to a healthy 3.63. He has allowed two earned runs or fewer in his last seven starts. He is certainly playing his best baseball right now. In his last nine starts, he has a 2.03 ERA with 48 strikeouts.

The Blue Jays made a rally in the eighth inning with a RBI double by Kevin Pillar and then a two-run single by Ryan Goins to make it a one run game at 5-4.

Ezequiel Carrera hit a deep fly that almost went into the seats to take the lead but the Pedro Strop escaped without any more damage in the inning.

Baez finished off the Blue Jays' chances of a win with a two-run blast for his 20th homer of the season. The homer set a franchise record with four guys 25 or younger with 20 or more homers in a season. Overall, he is the fifth Cubs player to hit 20 homers or more this season.

Cubs closer Wade Davis finished off the Blue Jays in the ninth inning for his 25th straight save which is a single-season franchise record and one shy of the overall franchise mark.

#Cubs are 8-1 in their last nine interleague games. #W pic.twitter.com/BiaBXu5TA1