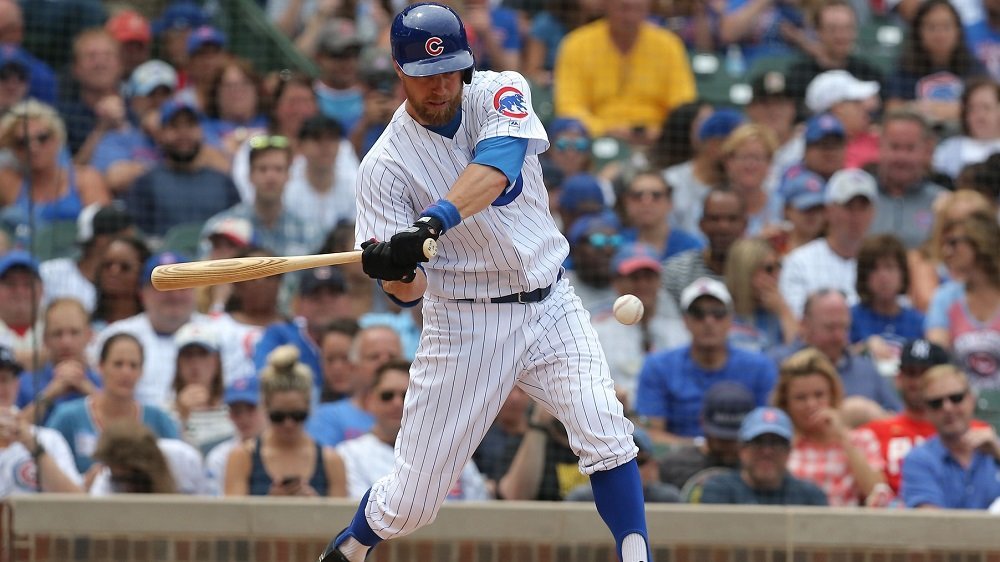 CHICAGO — A far cry from the first two games of the five-game series between the Chicago Cubs (57-39) and the St. Louis Cardinals (49-48), Cubs pitching dominated in the third contest between the National League Central foes. After recording 15 hits and 18 hits in games one and two, respectively, the Redbirds were limited to just two hits in a one-sided 7-2 loss to the Cubs on Saturday afternoon. Serving as the afternoon installment of a day-night doubleheader, the Cubs tallied 11 hits and were led by middle infielders Javier Baez and Ben Zobrist.

The Cubs were sparked right off the bat by first baseman Anthony Rizzo, who has hit leadoff in every game of the series thus far. Collecting his first triple of the season, as well as the 15th triple of his career, Rizzo smacked a three-bagger into the right-field corner in the first plate appearance of the bottom half of the opening inning. Later in the frame, Chicago right fielder Jason Heyward brought Rizzo home on a ground ball to shortstop.

Two truths and a lie:

- We got Matt Carpenter out in the 1st inning
- Yadi stole a base on us
- @ARizzo44 is not the greatest leadoff hitter of all time pic.twitter.com/tAwUZg7X7k

St. Louis first baseman Matt Carpenter, who experienced a career day on Friday by going 5-5 and accruing seven RBI, hit his fifth home run of the series with a solo bomb to right field. Fortunately for the Cubs, that proved to be Carpenter's lone hit of the contest. The Cubs retook the lead when, in the fifth inning, Baez hit an RBI single to right that scored Heyward after he and Zobrist hit bloopers to center to begin the half-inning.

.@MattCarp13 is the first #STLCards player with a home run in 5 consecutive games since Ryan Ludwick in 2008! pic.twitter.com/Iakqfr6KDV

Baez, who started at shortstop, went 3-4 with two RBI and also produced one of the top defensive highlights of his career with a cross-body throw to out Cardinals catcher Yadier Molina on a hard-hit chopper. Zobrist, meanwhile, put together his first four-hit performance of the year by going 4-4 at the dish and scoring two runs.

Chicago plated a total of two runs in the fifth. After Baez's RBI single, Kyle Schwarber skied a sacrifice fly to center that brought home Zobrist to put the Cubs up 3-1. Cardinals starting pitcher Luke Weaver did not last very long on the mound, pitching just four innings, in which he struggled with his command. Walking five and giving up seven hits, Weaver was charged with three runs.

Weaver's counterpart, Tyler Chatwood, also struggled with his command, which he is prone to do, and issued six walks. Other than that, the Cubs starter was decent on the bump, giving up just one hit and allowing only one run to score in 5.1 innings of work. As a reward for his efforts, Chatwood received his first win since May 11, bringing him to 4-5 overall. Weaver was given the loss to drop to 5-9.

Cardinals reliever Tyler Lyons was the true loser of the game, however, as he provided the Cubs with substantial breathing room by way of dismal four-run outing in the seventh inning. Prior to that, in the top half of the seventh, St. Louis took advantage of an error committed by Chicago third baseman Tommy La Stella that paved the way for Yairo Munoz to score on a sacrifice fly by Molina, which decreased the Cubs' lead to one run.

But Lyons imploded soon after entering the game and practically ruined any realistic chance of a St. Louis comeback. After recording an out on the first at-bat of the bottom of the seventh, Lyons then gave up a walk and two hits in the next three plate appearances, including an RBI double on a bloop hit down the left-field line by Baez. The Cubs added two more runs soon after that, with catcher Victor Caratini hitting a sacrifice fly and La Stella redeeming himself with an RBI base knock.

Leading 7-2 entering the eighth inning, the Cubs opted to bring in newly acquired reliever Jesse Chavez for his team debut. Chavez proved to be up for the challenge, as he pitched two scoreless innings to finish off the Cubs victory. Forcing the Cardinals into stranding 17 base runners on the afternoon, the Cubs improved to 2-1 in the five-game set with an outstanding pitching performance.

Three up, three down on three ground balls for Jesse Chavez in his #Cubs debut! #EverybodyIn pic.twitter.com/X5O70XWuKD