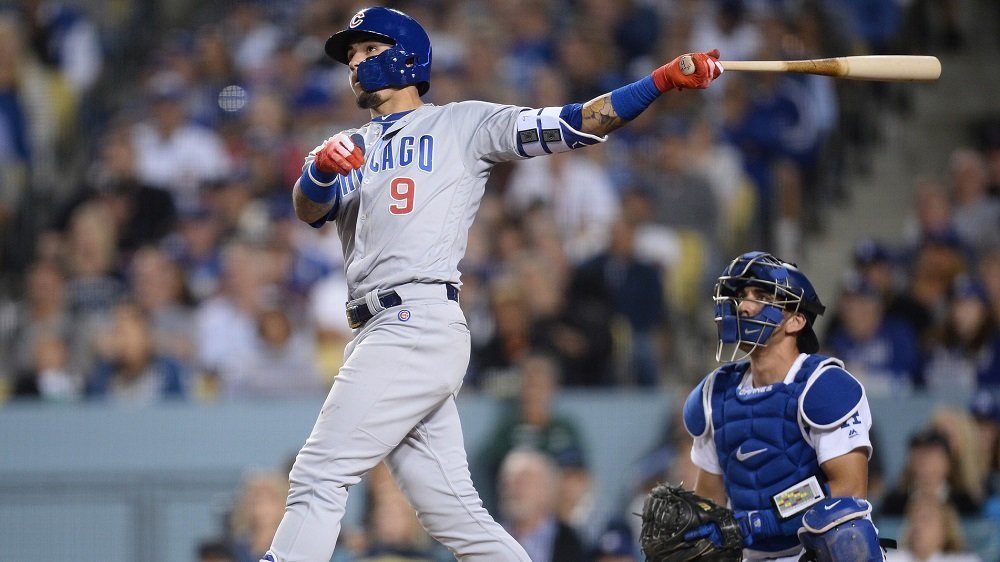 LOS ANGELES — With the Chicago Cubs in the midst of a five-game losing streak, Cubs hitting coach Chili Davis called a hitters-only meeting on Tuesday, and, evidently, it paid off. Led by a hot-hitting Javier Baez, the Cubs racked up 15 hits en route to a 9-4 victory over the Los Angeles Dodgers. Baez was outstanding at the plate, hitting a pair of home runs, including a grand slam, in a five-RBI showing.

The Dodgers took a 1-0 lead in the second inning on a two-out single from Cody Bellinger. Baez, who manned third base, prevented Cubs starting pitcher Jon Lester from giving up more runs with an impressive double play involving a tag-out of Bellinger on a rundown and a throw-out of Dodgers right fielder Yasiel Puig, who rounded too far around first base.

Anywhere on the diamond, @javy23baez is an All-Star.

Later, in the fifth, Baez put the Cubs on the board with a solo home run to right off Dodgers starter Ross Stripling. Dodgers catcher Austin Barnes regained the lead for Los Angeles on an RBI single in the bottom half of the inning, but an error by Puig in the sixth led to the Cubs taking the lead for good.

Javier Baez With his 15th HR of the season! #Cubs pic.twitter.com/GDX8qX8WTh

With a runner on first, Chicago's Ian Happ lined a shot to right that Puig misjudged, enabling the ball to sail past his glove. Scored as an error, the play resulted in the Cubs getting runners on second and third with one out. After that, a dribbler on the infield grass, which Addison Russell turned into an infield single, resulted in the Cubs tying the game up.

A few at-bats later, Baez cranked his second home run of the game on a shot to left against Dodgers reliever Edward Paredes. The grand slam was one of four hits for Baez on the evening. He went 4-5 and finished a triple shy of the cycle. Baez leads the Cubs with 16 home runs and 56 RBI on the season.

In the eighth, Willson Contreras, who went 2-4 with the bat, accrued an RBI on an RBI single that scored Ben Zobrist, who went 3-6 and scored twice. The Dodgers threatened in the eighth with a pair of runs. A wild pitch by Cubs reliever Anthony Bass allowed a run to score, and a two-out single from Max Muncy brought in another run to make it 8-4 in favor the Cubs.

The Cubs held their ground, however, and even manufactured an insurance run in the ninth. Russell garnered his third steal of the year after a one-out single and came around to score on a single to right off the bat of Albert Almora, Jr. Russell went 3-5 on the night.

Chicago broke its losing streak in grand fashion with the outstanding hitting performance. Helping matters for the Cubs was a solid pitching performance, as the powerful Dodgers offense was limited to six hits and three walks. Lester earned his 10th win to become 10-2, and Dodgers reliever Yimi Garcia, who was charged with the losing runs that were scored in the sixth, fell to 1-2 with the loss. The Cubs now stand at 43-34 overall, and the Dodgers are 42-36.