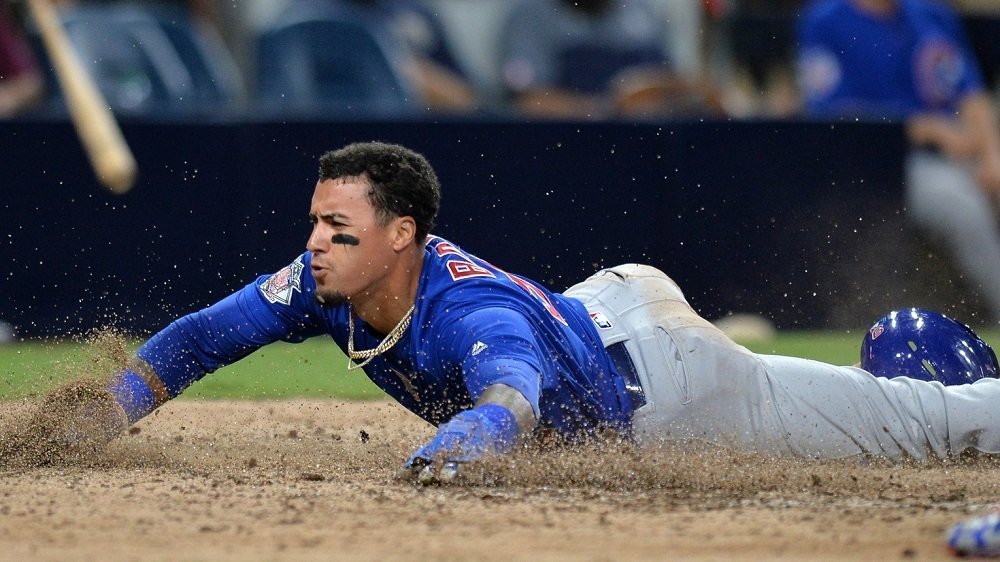 Javier Baez made the most of the San Diego Padres' mistakes on his winning play. (Photo Credit: Jake Roth-USA TODAY Sports)

SAN DIEGO — Sparked by an all-around great performance from second baseman Javier Baez, the Chicago Cubs (53-38) scored a pair of late runs to collect a dramatic victory over the San Diego Padres (40-57). Taking part in their fourth extra-innings game in less than a week, the Cubs topped the Padres in 10 innings by a final tally of 5-4. Fitting with the theme of wacky base-running plays that has been a fixture of the Cubs' current West Coast road trip, Baez, who went 2-4 with the bat, scored the winning run by stealing a base and advancing two more bases because of defensive blunders.

The Padres racked up three early runs against maligned Cubs starter Tyler Chatwood, who pitched five innings of five-hit ball. In the first inning, San Diego loaded the bases with no outs and scored its first run on a fielder's choice groundout by Eric Hosmer. On the play, Baez made a great diving stop and an ensuing behind-the-back toss to shortstop Addison Russell in an attempt at a double play, but the force out at second was all that the Cubs could get.

After saving additional Padres runs from scoring with his all-out effort to corral Hosmer's grounder, Baez led off the top half of the next frame with a near-homer. Featuring a controversial ruling regarding fan interference, the hit resulted in a ground-rule double. At the end of its flight, the ball was touched by a Padres fan reaching over the wall in right field. The umpires ruled that the interference did not prevent a home run, however, and, after a video review of the play in question, the call of a double stood.

See how the ball passes IN FRONT of the foul pole? That makes it fair. And that @Padres fan did NOT reach onto the field of play. #ELMAGOROBBED @Cubs #ElMago?? pic.twitter.com/zX2DgsjSVj

For what it is worth, Baez scored later in the inning on a two-run single to left-center by Ian Happ that also scored Russell. The Cubs picked up three runs on six hits and five walks against Padres starter Clayton Richard. The Padres retook the lead in the bottom of the second on a two-run blast from Travis Jankowski, but the Cubs knotted them up again when Kris Bryant hit a two-out double in the fifth that scored Albert Almora, Jr.

The drama began to unfold in the bottom of the eighth, as the Padres put together a two-out rally against Cubs reliever Carl Edwards, Jr., that culminated in catcher Austin Hedges driving in a run on an RBI single to put San Diego ahead 4-3. Chicago tied the game during crunch time in the ninth. Cubs first baseman Anthony Rizzo, who batted leadoff on the night, continued with his leadoff heroics that date back to last season with a two-out, two-strike double to deep center off Padres closer Brand Hand that scored Jason Heyward. Rizzo went 3-5 at the plate.

In the 10th, Baez gave the Cubs a 5-4 lead due to a combination of his 18th steal of the season and a couple of errors suffered by the Padres. After collecting an infield single with one out, Baez stole second. On the steal attempt, Hedges, who changed from San Diego's hero to San Diego's downfall in a span of just a few innings, made an errant throw that sailed into center field, where Manuel Margot bobbled the baseball. Those two errors enabled Baez to come all the way around from first base to score. In the bottom of the 10th, Cubs closer Brandon Morrow collected his 21st save to secure the Chicago victory.