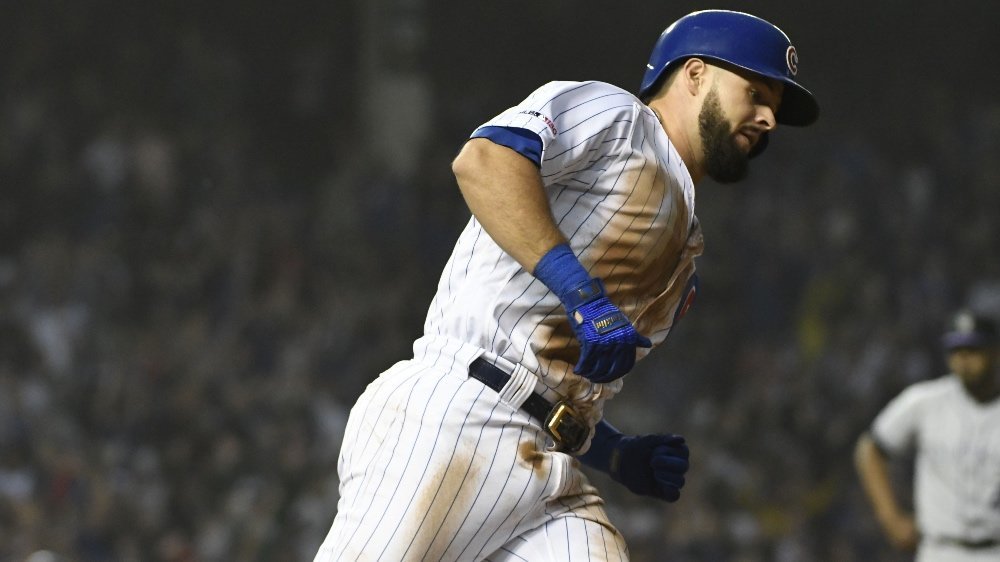 Seven of the Cubs' nine runs scored on the evening were driven in by David Bote. (Credit: David Banks-USA TODAY Sports)

CHICAGO, Ill. — Staving off a feisty Colorado Rockies (31-29) bunch, the Chicago Cubs (34-26) never trailed on Wednesday, despite allowing two sizable leads to dissipate. Winning 9-8 in a thrilling contest that took place on a foggy night at Wrigley Field, the Cubs were led by second baseman David Bote, who racked up a career-high seven RBI. 21 combined hits were tallied in the barn burner, including a 3-run home run hit by Bote, and the Cubs ultimately came out top for their third straight victory.

A tale of two games, the matchup was scoreless through 4 1/2 innings before 17 total runs were plated the rest of the way. Bote went 4-for-4 at the dish and collected seven RBI via three clutch hits, all of which came with two outs. The first one was a 3-run dinger that he sailed through the fog and into the bleachers beyond left-center. The 410-foot bomb marked Bote's seventh homer of the season and put the Cubs up 3-0 in the bottom of the fifth.

Yu Darvish started on the mound for the Cubs and was in line for his first-ever winning decision at Wrigley before the hard-luck pitcher departed after giving up a run in the top of the sixth. Reliever Kyle Ryan entered in Darvish's wake and enabled two runs to score, thereby giving up the Cubs' lead and handing Darvish a no-decision. To be fair to Ryan, his job was made more difficult when first baseman Anthony Rizzo suffered a throwing error while attempting to throw to second base for a force out after fielding a dribbler. That allowed Colorado's second run to score, and a proceeding RBI base knock tied the game at 3-3.

The Cubs wasted no time in regaining the lead, though, as they plated five runs in the bottom of the sixth. Rockies starting pitcher German Marquez came unglued after giving up a leadoff double to left fielder Kyle Schwarber. He then hit third baseman Kris Bryant with a pitch and was taken for an RBI single off the bat of Rizzo thereafter. A couple of plate appearances later, Marquez hit another batter, as he beaned catcher Willson Contreras with the bases loaded to force in a run. Following a pitching change, Bote came through with his second pivotal 2-out hit of the evening when he slapped a bases-clearing double into the left-field corner, which put the Cubs up 8-3.

Chicago reliever Brad Brach struggled through a miserable seventh inning, in which he allowed the first four batters of the frame to all reach base. The Rockies scored four runs off Brach before he was yanked from the game with the Cubs clinging to a 1-run lead. Capping off his epic performance, Bote tabbed yet another critical 2-out hit in the bottom of the eighth, with a single to right scoring Contreras and providing the Cubs with an insurance run. On the night that the Cubs agreed to a deal with star free-agent closer Craig Kimbrel, Steve Cishek was called upon with a save opportunity on the line. Cishek's initial struggles, which consisted of a leadoff double and an ensuing RBI single that made the score 9-8, gave way to great command, as the reliever recorded two consecutive swinging strikeouts to end the game and lock up the Cubs' hard-fought 9-8 triumph.