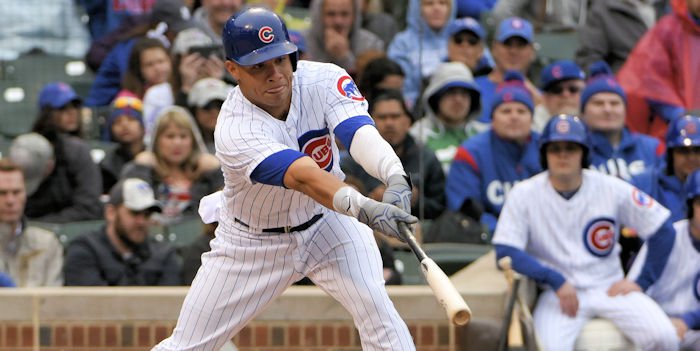 CHICAGO -- Wrigley Field was frosty and rainy with a wind chill of 37 degrees as the surprising first-place Brewers defeated the Chicago Cubs 6-3 during Friday's National League Central showdown. It was an ugly game watched by 36,923 fans as the Cubs pitchers walked ten batters and the defense committed three errors.

The Brew Crew got things going early with three walks and then a two-run single by Jeff Bandy to put the Brewers up 2-0 in the first inning. Rookie pitcher Eddie Butler had to grind through the inning which took 20 minutes as he had a high count of 40 pitches. At the bottom of the inning, Anthony Rizzo hit a towering fly ball that stayed in the ballpark because of the 18 MPH winds blowing straight in.

In a rather shocking statistic to showcase the Cubs early game woes, they have allowed 45 first-inning runs through 41 games which is the highest mark in the major leagues.

Cubs outfielder Kyle Schwarber made a spectacular diving catch to end the Brewers' threat in the third inning to keep the score 2-0 for the Brewers. The Cubs got on the board with a RBI double by Jon Jay to score Javier Baez at the bottom of the inning.

The bases were loaded in the fourth inning, and catcher Willson Contreras had the fourth straight single of the inning which was a two-run RBI single to give the Cubs their first lead of the game at 3-2. The inning ended strangely as the Cubs had two bunt-outs out in the inning.

Mike Montgomery had three walks in the fifth inning as the Brewers got two runs on the board to go up 4-3. Montgomery has a high 16.7% walk rate this season. The rain started to come down hard as the ground crew checked on the field between the inning. The game was called into a rain delay after a crazy play where Kyle Schwarber had two errors (catch error, throwing error) where the wind blew the ball from left field all the way to the infield dirt. Schwarber called off Javier Baez but was unable to make the play and then compounded the mistake by throwing an errant throw to second base. The game probably should have been called for a stoppage before they allowed Schwarber and the rest of the defense come up for the sixth inning for possible injury. The Brewers added two more runs when play resumed after a two-hour rain delay in the sixth inning to go up 6-3.

The Cubs' bats went quiet the last few innings as they failed to score and the Brewers took game one of the three-game set 6-3. The Brewers are now 13-7 on the road this season.

Jake Arrieta will try to get the Northsiders back on track against Chase Anderson on Saturday at 1:20 CDT.