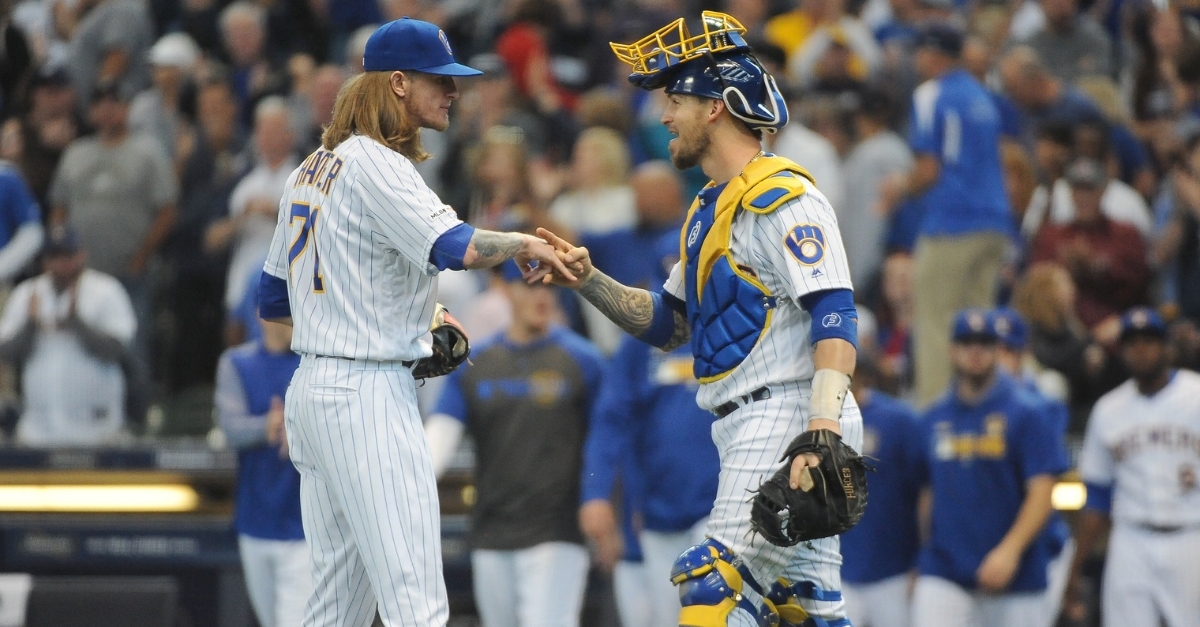 MILWAUKEE — Although Miller Park is known as "Wrigley Field North" because of the abundance of Chicago Cubs (76-66) fans who regularly make the trip to Wisconsin when the Cubs take on the Milwaukee Brewers (74-68) there, the Brewers had the upper hand at their home ballpark in the final series of the season between the National League Central foes. Taking three of four from the Cubs, the Brewers wrapped up the 4-game set with an 8-5 victory on Sunday. Furthermore, the Brewers earned a triumph in the 19-game season series with the Cubs, as they went 10-9 versus the North Siders.

Jon Lester made the start on the mound for the Cubs and, despite striking out seven, was taken for eight runs on seven hits and three walks in 5 1/3 innings of work. The first three batters of the contest for the Brewers all reached base, as Milwaukee took a 1-0 lead in the bottom of the first on a double-play groundout by Ryan Braun that plated Lorenzo Cain. For the Brewers, Adrian Houser started on the bump, and he pitched six innings of 4-run ball, in which he fanned six.

A hit by pitch, of all things, sparked the Cubs at the plate. With the North Siders already missing the services of an injured Javier Baez and a sore Kris Bryant, the Cubs' infield suffered another blow to its depth when shortstop Addison Russell was drilled in the side of the head with a pitch to lead off the top of the third. Russell was able to temporarily remain in the game after the fastball, which seemed to graze Russell's batting helmet before making contact with Russell's head, once he was examined by trainers but was pulled following the conclusion of the half-inning.

On the very next pitch after he was beaned, Russell stole second base. Then, David Bote hit a base knock to right field that the Brewers' Christian Yelich fielded. Yelich made an errant throw back into the infield, enabling Russell to score and Bote to reach second. Two straight doubles ensued, with Lester slapping an RBI 2-bagger down the right-field line to set up an RBI double by Ben Zobrist. Houser gathered himself at that point and outed three consecutive batters, leaving Zobrist stranded.

Lester came unglued in the bottom of the fourth, with the Brew Crew scoring five runs on four hits and one walk. Yelich led off with a single and was scored thereafter on an RBI double off the bat of Braun. A few plate appearances later, Hernan Perez ushered Braun home with a game-tying RBI single, and, with two outs, Tyler Austin provided the Brewers with a 3-run advantage by skying a 3-run dinger. Not long before Lester was yanked, Eric Thames went yard off Lester to lead off the bottom of the sixth, with the solo shot making the score 7-3 in favor of the Brewers.

Fresh off being called up from the minors, Cubs reliever Danny Hultzen made his long-awaited MLB debut. The former top prospect, who has dealt with serious injury issues since being drafted in 2011, tossed a scoreless seventh inning. Hultzen's outing was shaky out of the gate, as he hit the leadoff man with a pitch that ricocheted directly into the home-plate umpire's knee, leading to the umpire hobbling around in pain before being able to return to his post behind the dish. A base hit followed, but Hultzen buckled down after that and struck out three batters in a row.

Jason Hayward went 2-for-4 at the dish and was the lone Cubs to accrue multiple hits on the afternoon. Heyward's second hit of the day was a 2-run jack that gave the Cubs new life in the top of the ninth. The 427-foot blast, which sailed into the upper deck beyond right field, was preceded by a leadoff walk drawn by Willson Contreras. Not long after that, Cub killer Josh Hader entered to pitch for the Brewers with one out and a man on first, and the fireballer garnered back-to-back strikeouts to wrap up Milwaukee's 8-5 win. As a result of their victory, the Brewers are now just two games behind the Cubs in the standings.