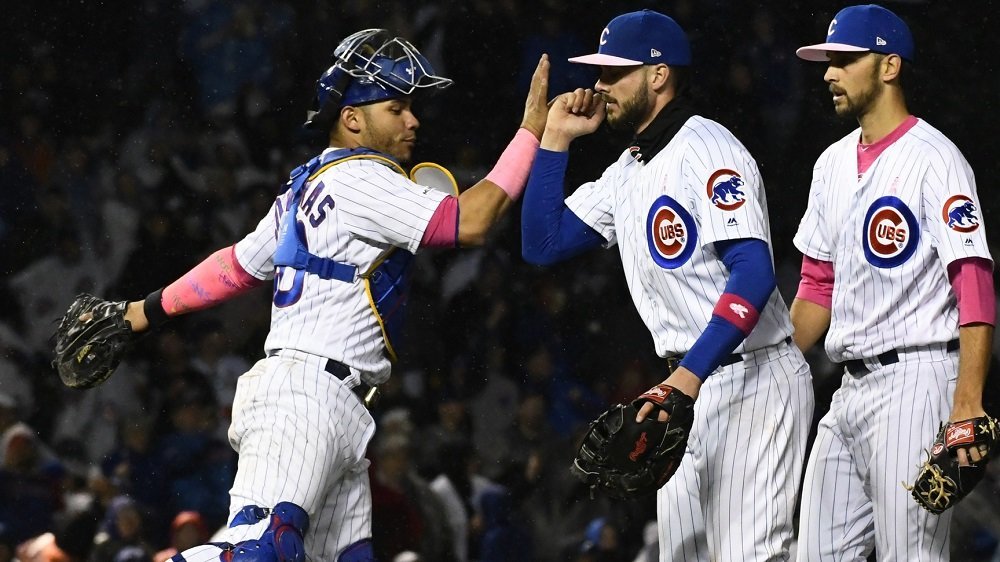 CHICAGO, Ill. — A dreary, rainy night at Wrigley Field did not put a damper on a Mother's Day victory tallied by the Chicago Cubs (24-14), who, in their pinkish uniforms, defeated the Milwaukee Brewers (24-18) 4-1 to take two of three in the 3-game set. In addition to coming up with multiple clutch hits, the Cubs were clutch in the pitching department and tallied several critical outs when the Brewers had runners in scoring position. Winning 4-1, the Cubs have won 12 of their past 14 contests and last dropped a series at Milwaukee in early April. Furthermore, the Cubs have won eight consecutive series for the first time since 2008.

Jon Lester started on the bump for the Cubs and gave up just one run while striking out six. Lester was taken for nine hits, but he escaped several tight jams throughout his 6 2/3 innings pitched. At the plate, the Cubs provided Lester with an early lead to work with by going up 1-0 against Brewers starter Jhoulys Chacin in the bottom of the first. Kris Bryant initially reached base because of a throwing error and eventually advanced to third due to a wild pitch before being plated on a Willson Contreras groundout.

Contreras came through behind the plate by throwing out an attempted base stealer in the top of the third to cap off a "strike him, throw him out" double play that ended the half-inning. Kyle Schwarber made a great defensive play for the Cubs in the early goings, too, with a sliding catch in left field, but he was unable to make a catch on a high fly ball caught in the Chicago turbulence during the top of the fourth. The error allowed the Brewers' Christian Yelich to reach third base, and Jesus Aguilar brought Yelich home soon afterward with a base knock.

A 2-out rally resulted in the Cubs retaking the lead in the fifth. Bryant recorded a 2-out single, which was followed by an RBI double hit to the wall in right-center by Javier Baez. Bryant hustled around the bases to score on the play and provide the Cubs with a 2-1 advantage. Baez stepped up on defense in the top half of the next inning, when he threw home after fielding a grounder, thereby enabling Contreras to tag Aguilar out at the plate and preserve Chicago's lead.

Milwaukee notched a walk and a single with two outs in the seventh, which ended Lester's outing, but Cubs reliever Brandon Kintzler entered the game and struck Aguilar out looking to leave the runners on the corners stranded. Bryant followed that up with a 2-run blast in the bottom half of the inning for his fifth homer in the past eight games. The 385-footer was lined over the wall in center field and scored Albert Almora Jr., who led off the bottom of the seventh with a single. Bryant, who started at first base in place of an ailing Anthony Rizzo, went 3-for-4 at the dish and now has eight home runs and 26 RBI on the season, with his seventh-inning round-tripper resulting in the eventual final score of 4-1.