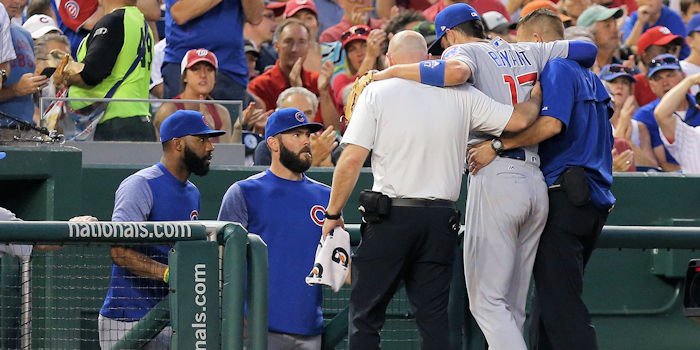 WASHINGTON – For the second night in a row, the Washington Nationals dominated the Chicago Cubs in every facet of the game on Wednesday night, using three solo home runs and 11 total hits to dismantle the struggling Cubbies. Despite their lackluster performance in the 8-4 defeat, the Cubs have bigger concerns right now, as star third baseman Kris Bryant suffered a potentially serious ankle injury in the sixth inning, forcing him to leave the game. Another pressing concern is the prevailing downfall of veteran starting pitcher John Lackey, who was responsible for all eight of Washington's runs in the Wednesday loss for the Cubs.

Lackey's knack for experiencing one dismal inning early on in his starts this season has been rather uncanny, and it has frequently resulted in Cubs losses. Tonight's shellacking of Lackey took place in the second inning, as the Nats scored four runs on four hits and took a commanding 5-0 lead. Already leading 1-0 because of an RBI single by first baseman Ryan Zimmerman that scored right fielder Bryce Harper in the opening inning, Washington did not hesitate to increase its lead in the second inning. Third baseman Anthony Rendon, who went a perfect 3-3 in the game, led off with a rocket to left for a solo home run, which was followed up by a solo shot off the bat of catcher Matt Wieters.

Lackey, fitting with the frustrating season that he has had, endured several headaches throughout the remainder of the inning, from giving up a hit to pitcher Stephen Strasburg to moving runners into scoring position on a wild pitch and walking a run in with the bases juiced. The frustration was exacerbated due to a misplayed grounder by Bryant, his eighth error of the year, that allowed an additional run to score and provided Washington with its aforementioned five-run lead.

Lackey somehow remained in the game through 5.1 innings, giving up nine hits and eight runs in that span. The Nationals went up 6-0 in the third, as Rendon doubled at the start of the inning and was later scored on a sacrifice fly by center fielder Michael Taylor. Lackey and the Cubs gained new life thereafter, though, as Chicago catcher Willson Contreras put the Cubs on the board with a two-run dinger in the bottom half of the fourth, his ninth home run of the year. Prior to that, Strasburg had been virtually unhittable to start the contest, but a Bryant double to lead off the inning set the tone for the Cubs to mount a valiant comeback attempt.

Although it essentially did not matter in the end, the Cubs refused to go quietly after going down 6-0. In the inning following the Contreras homer, Chicago center fielder Albert Almora began with a double to deep left. The North Siders caught a break afterward that made up for the error by Bryant, as Zimmerman could not corral a grounder at first, an error that allowed Almora to reach home safely and pull the Cubs to within three.

Second baseman Daniel Murphy of Washington quelled the Cubs' comeback excitement in the proceeding inning, though, by powering a Lackey pitch to straight center for a home run, giving the Nats a 7-3 advantage. Murphy now boasts 14 homers and 55 RBI overall. After giving up a one-out double in the sixth, Lackey was finally yanked from the game, putting an inglorious end to a start that saw the right-hander's ERA rise to a miserable 5.24. Brian Duensing replaced him on the hill and was quickly victimized by Nationals slugger Bryce Harper, who hit an RBI double to center that drove in a runner from second to make the score 8-3 in favor of the Nats.

Although the Harper double was certainly demoralizing, the worst part about the bottom of the sixth for the Cubs was the freak injury suffered by Bryant, who rolled his ankle after unknowingly stepping on the edge of third base while catching a pop-up. Helped off of the field, Bryant certainly seemed to be in pain as he departed the game with the disconcerting injury. Chicago was deflated from that point forward. Aside from a meaningless round-tripper by first baseman Anthony Rizzo in the eighth, Rizzo's 18th home run of the year, the Cubs were listless at the plate for the remainder of the game.

Winning 8-4, the Nationals (47-31) controlled the game from start to finish for the second consecutive outing, shedding light on just how detrimental the wishy-washy nature of the Cubs' play this season can be for the North Siders, who have appeared very vulnerable against top-tier teams like Washington for most of this season.

One night after collecting two measly hits, the Cubs (39-39) showed no signs of urgency offensively, as they accrued only six this time around. Before suffering his injury, Bryant was the only spark plug with the bat for the Cubs, going 2-3 with one run scored. Needless to say, Lackey was tonight's loser, falling to 5-9. Strasburg, who garnered an impressive 13 strikeouts in seven innings on the hill, received the win, becoming 9-2 overall.

The Nationals will look to claim their third victory of the four-game affair with the Cubs in the series finale tomorrow afternoon. While the series was billed as a potential NLCS preview during its build-up, it has turned out to be fairly one-sided in Washington's favor. And without Bryant to bolster the Cubs, tomorrow's game could be even more one-sided than the two previous drubbings.