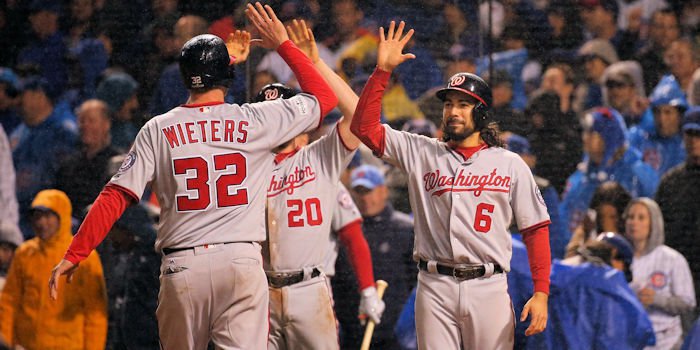 CHICAGO -- The Washington Nationals brought out a 'sickly' and reluctant Stephen Strasburg suffering from allergen problems and he pitched lights out as the Nationals cruised to a 5-0 win at Wrigley Field on Wednesday night.

The game with elite pitchers Jake Arrieta and Strasburg started off like a pitcher's duel as expected.

In the third inning, Nationals speedster Trea Turner got his first hit of the postseason with a double to left field. Turner eventually scored after a wild pitch by Arrieta and an error by shortstop Addison Russell on a slow dribbler in the infield by Ryan Zimmerman as the Nationals went up 1-0.

Arrieta got out of a jam in the fourth inning leaving the bases loaded with a strikeout by Jason Werth. In possibly his final start for the Cubs, Arrieta was the first Cubs pitcher with five or more walks in a playoff game since Ryan Dempster had seven in 2008.

However, because of those walks and his high pitch count, Arrieta went only four innings giving up just two hits, an unearned run, and four strikeouts. Jon Lester came in to relieve Arrieta and pitched three scoreless innings, and it was his first relief start since Game 7 of the 2016 World Series.

Strasburg broke his own Nationals postseason strikeout record (10) with his 12th strikeout through seven innings and only gave up three hits and two walks. According to CSN, his twelve strikeouts are most in a preseason game since Howard Ehmke's 13 K's in 1929.

Cubs batters had 15 swinging strikes on his 32 changeups during the contest. The young phenom pitcher has a career postseason ERA of 0.47 in 19 innings pitched in three starts.

A stunned and silent crowd watched Michael Taylor hit a two-out grand slam in the left field basket against shutdown closer Wade Davis to put the Nationals up a resounding 5-0. According to ESPN Stats and Info, four of the five postseason grand slams were hit by the visiting team at Wrigley Field.

In an anemic performance with the wind blowing in and rain drizzling at Wrigley, Kris Bryant struck out four times during the contest. It was the most strikeouts by any Cubs player in a game in postseason history according to ESPN Stats and Info, and it was Bryant's first four-strikeout game since Aug 28, 2015.

Winner takes all for Game 5 and it will be tomorrow night at Nationals Park at 7 p.m. CT.