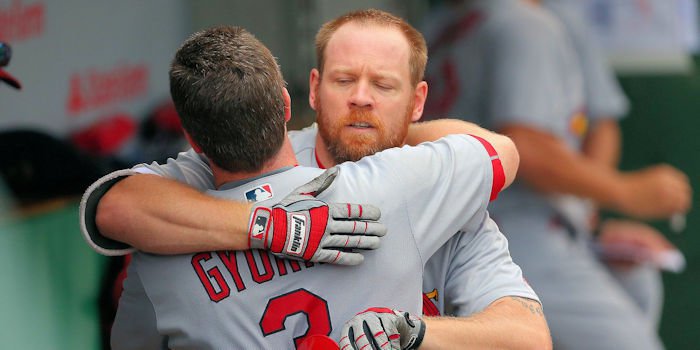 The Cubs' loss snapped the team's winning streak at an impressive 11 games, but the Cubs still have a 13-game edge over the Cardinals in the National League Central standings. The Cubs are now 41-18 at home and 15-4 in their last 19 home games.

Addison Russell smacked a changeup for a two-run homer in the second inning for his 14th homer and 71 RBIs on the season to put the Cubs up 2-0.

However, the Cardinals showed off some of their own home run power with Brandon Moss' solo homer to right-center field for his 20th of the season in the top of the sixth inning. Jedd Gyorko hit a solo homer to left field in the next inning to tie the game up at 2-2.

Kyle "Professor" Hendricks pitched seven innings, giving up five hits, two earned runs on solo homers and tied a career-high with 12 strikeouts. Previously, Hendricks had given up only two home runs in his previous 12 games at Wrigley Field this season.

The key point in the game occurred when reliever C.J. Edwards struck out catcher Yadi Molina with the bases loaded, but a wild pitch scored the go-ahead run to make it 3-2 Cardinals. Outfielder Randal Grichuk celebrated his birthday with a memorable grand slam homer to left field for his 14th of the season to pile on as the Cardinals went up 8-2. Four walks in the inning came into score for the Cardinals.

The Cubs tried to start a valiant rally with three straight singles in the ninth inning but were only able to score two runs.

Addi SMASH!@Addison_Russell launches a two-run blast to get us going in the 2nd! #AddisonMuscle pic.twitter.com/0UzNj5bRI6

.@DiggerPhelps gets back to his coaching roots with a pep talk before the stretch. Now #LetsGetSomeRuns! pic.twitter.com/udkrNogeJQ

The win streak ends at 11 games.

It was a good run. pic.twitter.com/MLaFTWu7Fj