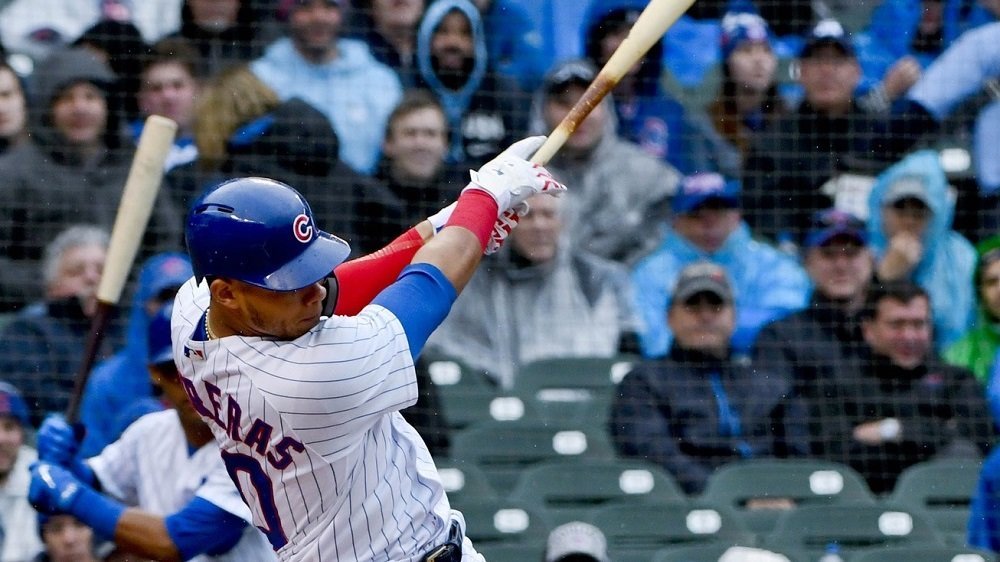 Willson Contreras set the tone for the Cubs with a first-inning grand slam and went on to have arguably the best game of his career. (Photo Credit: Matt Marton-USA TODAY Sports)

CHICAGO — Friday marked the opener of a three-game installment of the Crosstown Classic between the Chicago Cubs and the Chicago White Sox. More importantly, Friday also marked "Willson Contreras Bobblehead Day" at Wrigley Field, and it featured an inspired performance by Contreras that led the Cubs to victory.

Taking advantage of a grand slam by catcher Willson Contreras as part of a five-run opening inning, the Cubs (20-15) coasted to a lopsided 11-2 win over the White Sox (9-26). The North Siders won the 10th of their last 12 home games, riding a 4-5, seven-RBI performance by Contreras, as well as a decent outing from starting pitcher Tyler Chatwood, to a win over the rival South Siders.

Contreras tallied just six RBI throughout the entire month of April and, entering Friday's contest, sported a modest nine RBI on the season. Eclipsing his April RBI total in one day, Contreras jacked two home runs in the Cubs' walloping of the White Sox, setting the tone with his grand slam.

Hello.
My name is Willson Contreras.
You hit my friend Kris.
Prepare to fly. pic.twitter.com/yX4vqkI8Sb

White Sox starting pitcher Carson Fulmer did not fare very well on the mound, lasting just 1.2 innings and giving up five runs on three hits, four walks and a hit batsman during that stretch. Fulmer was handed the loss for his troubles, falling to 2-3 overall.

The Cubs' first three batters all reached base in the first inning, with manager Joe Maddon's decision to bat Ben Zobrist in the leadoff spot paying off. Zobrist doubled down the left-field line to incite the Cubs' run, and, after an HBP of third baseman Kris Bryant, first baseman Anthony Rizzo brought home Zobrist on a screamer to right.

Three at-bats later, with the bases juiced, Contreras came through, taking Fulmer deep on a fastball thrown over the middle. The 393-foot grand slam just cleared the ivy-laden wall in center field, providing the Cubs with a commanding 5-0 lead.

White Sox right fielder Daniel Palka put the White Sox on the board with an RBI double to deep center in the fourth that put runners on second and third with one out. Chatwood composed himself and earned two consecutive outs thereafter, avoiding a serious letdown.

Chatwood pitched five innings, striking out six and walking five as part of a two-run, three-hit appearance. Although it was not long enough to qualify as a quality start, Chatwood's outing was solid, and it earned the Cubs right-hander a winning decision that improved his record to 3-3.

Bailing out Chatwood in the final at-bat of his start was Cubs left fielder Kyle Schwarber, who threw a rope to home plate that outed Nicky Delmonico of the White Sox in the fifth inning. Coming on a two-out RBI single by Abreu, Delmonico decided to test Schwarber's arm but was thrown out with ease to end the inning and allow Chatwood to escape with his decent start still intact.

When will they learn, don't run on Kyle Schwarber! #Cubs pic.twitter.com/E2JR3cW1pN

Prior to that, in the bottom half of the fourth, Bryant brought the Cubs' lead back up to five with a 398-foot solo shot to left-center field off White Sox reliever Hector Santiago. Bryant's seventh long ball of the season, the round-tripper came mere days after Bryant clubbed his 100th career home run.

While Bryant, who went 2-3 with two walks and three runs to his name, was outstanding on Friday, Contreras was the shining star at Wrigley, living up to the billing on his honorary bobblehead day. In additon to his career day with the bat, Contreras, who now boasts three home runs and 16 RBI on the season, showed out in the field, producing perhaps the best throw from behind home plate of his young career.

Despite having his line of sight blocked by the batter following a failed bunt attempt, Contreras threw a dart to second base that enabled Cubs shortstop Addison Russell to tag White Sox third baseman Matt Davidson out. Davidson was caught roaming too far off the bag for Contreras's comfort, and the bobblehead honoree made him pay. Later, in the sixth, Contreras produced yet another highlight with a towering 435-foot homer to left-center.

Contreras's solo jack made the score 7-2 in favor of the Cubs and preceded a four-run seventh inning for the Cubs that essentially put the game out of reach for the South Siders. To begin the bottom of the seventh, Davidson committed an error at third on a hard-hit ball off the bat of the Cubs' Ian Happ, and the North Siders took advantage.

Soon afterward, Bryant hit an RBI single to left that scored Albert Almora, Jr., and, following a walk by Rizzo, Cubs second baseman Javier Baez tallied his Major League-leading 34th RBI via a sacrifice fly that put the Cubs ahead 9-2. Later in the frame, Contreras increased his daily RBI total to seven with a two-run double to right, resulting in the eventual final score of 11-2.

The Cubs have won four games in a row and will be aiming to complete their second straight three-game sweep as they continue their battle with the White Sox at the Friendly Confines this weekend.