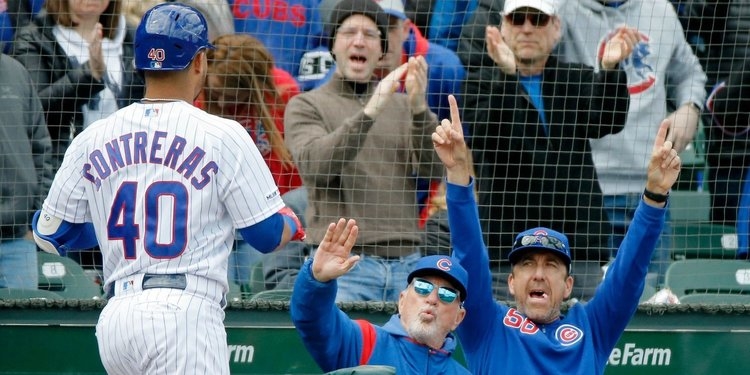 CHICAGO, Ill. — With 20-mile-per-hour winds blowing directly out of Wrigley Field, it would be reasonable to assume that home runs would play a significant role in the battle between the Chicago Cubs (5-8) and the Los Angeles Angels (7-7) on Friday, but only one team was able to take advantage of the gusts. Scoring all five of their runs off four separate home runs, including two by the same player, the Cubs defeated the Angels 5-1 in the opening matchup of a 3-game interleague set.

The contest on Friday afternoon lasted approximately 2 1/2 hours, with a bevy of fly balls and groundouts expediting the action. Cubs starter Cole Hamels, who has pitched well against the Angels throughout his career, threw eight innings of 4-hit ball, in which he struck out six batters, and received the win. For the Angels, Tyler Skaggs started on the mound and was taken for four runs on seven hits.

Cubs first baseman Anthony Rizzo started the scoring action with a 2-run blast to right that scored third baseman Kris Bryant in the opening frame. Rizzo's 472-foot jack was quickly followed by a moonshot off the bat of catcher Willson Contreras that carried 460 feet over the left-field bleachers and onto Waveland Avenue. The first-inning round-trippers marked the first time in the Statcast era, which dates back to 2015, that the Cubs hit multiple home runs of at least 460 feet in the same game.

Veteran Angel Albert Pujols likely sent shivers down the spines of Cubs fans by inciting negative flashbacks when he drilled a 426-foot homer to lead off the fourth. The former Cardinal went 2-for-4 against his old rivals on the day. Chicago second baseman David Bote responded with his first dinger of the season in the bottom half of the fourth. Bote's 417-foot home run made the score 4-1 in favor of the Cubs.

Contreras capped off the homer-filled affair with his second blast out onto Waveland Avenue in the bottom of the sixth. The 443-foot rainmaker was Contreras' fifth long ball of the year and part of a 3-for-4 outing. With 10 hits, the Cubs slugged their way to a 5-1 victory in game one against the Angels. The Angels, who are playing without superstar Mike Trout in this series, will assuredly aim to keep the Cubs' hits within the confines of the ballpark for the remainder of the series.