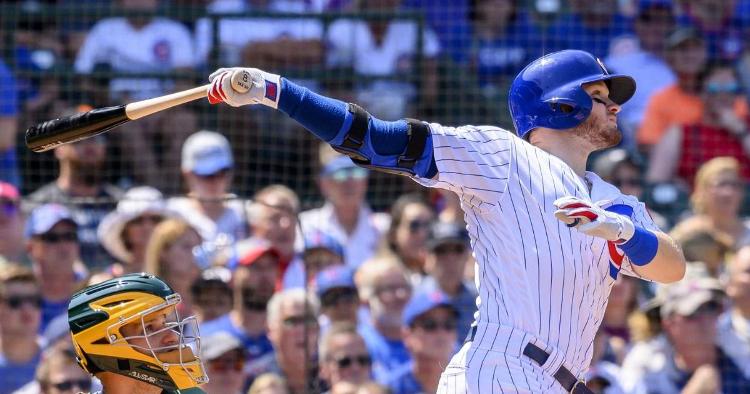 Let’s make a deal: According to Jon Heyman, “Javier Baez’s reps and the Cubs are expected to sit down at the winter meetings to see if an extension is possible. Would be a whopper obvs. Cubs still need to figure out who from the core will be dealt.”

I believe this all translates to whether or the not it’ll be Kris Bryant or Willson Contreras who gets shipped off. With the murkiness surrounding KB’s free agent status, Contreras has emerged as the big name on the Cubs’ trading block. Depending on how big Javy’s deal might be, combined with how his yearly payout would be structured, it’s not inconceivable that the Cubs could deal both, but while that’d be an awful big chunk of money off the books, it would also represent an awful lot of talent leaving the team.

The Cubs still have a lot of lofty salary on the books between Jon Lester, Jason Heyward, Yu Darvish and others, and until some of that begins to drop off, payroll will be a bit of a tap dance routine.

Thankful for @JLester34, who provided #Thanksgiving meals to families at @advocatehealth and Chicago shelters today. pic.twitter.com/669nSEpFho

Lofty dreams Without even delving into the story (below), I began picturing an infield with Anthony Rendon standing in Kris Bryant’s spot. Rendon would absolutely change the dynamic of the Cubs’ clubhouse, but how could Theo ever afford him, without dealing away key players for some extra cash, pillaging the farm system again and leveraging Tom Ricketts into luxury tax hell?

Anthony Rendon is coming off a World Series win and an MVP-caliber season. Could Clark and Addison be his next stop?

Kendall Graveman: After spending 2019 rehabbing in Iowa (Tommy John), Theo and the boys elected not to pick up Graveman’s $3M option earlier this month. Graveman wasn’t out of work long, as the Seattle Mariners have now signed him to a one-year/$1.5M deal. The deal includes a $3.5M club option or $500,000 buyout for 2021.

Dempster preparing: When it come to the Cubs Convention, Ryan Dempster never disappoints.

Had a blast yesterday getting a few things ready for the @Cubs convention. January 17th! ?@OffTheMound? will be there! pic.twitter.com/zTo9b9MZU8

Baseball Quotes: “I'm always amazed when a pitcher becomes angry at a hitter for hitting a home run off him. When I strike out, I don't get angry at the pitcher, I get angry at myself. I would think that if a pitcher threw up a home run ball, he should be angry at himself.” -Willie Stargell

There is always some kid who may be seeing me for the first or last time, I owe him my best. -Joe DiMaggio pic.twitter.com/vCmQ0HmuSg

White Sox: The Sox have outrighted OF Daniel Palka.

Marcus Semien has told A’s he’s interested in extension. Not only is he a Bay Area native and Cal product but the A’s showed faith in him for years, enabling his stardom. They would love to keep Semien and will talk but it’s tough for A’s. He could be huge free agent after 2020.

Rockies: Despite rumors circulating about the possibility of RHP Jon Gray becoming trade bait, the team says they do not intend to deal him.

There is a general industry perception that Gerrit Cole prefers the west coast, but the Yankees don’t have any specific information from the agent or player to indicate he would choose California over Bronx. They’re still in.

Red Sox: Boston has placed LHP Brian Johnson on outright waivers. There is now a two-day window open for teams o claim him.

Can Wheeler meet expectations? Make no mistake, I think I’d take Wheeler for the Cubs without any questions asked, but there may be a caveat. Former Mets’ GM Steve Phillips points out that duration sn’t really part of Wheeler’s repertoire.

I would love to have Zack Wheeler on my team but he is a scary FA option: a career ERA+ of 100 which is average; averaged 21 GS/year and less than 6 IP/GS. Teams offering $20M/season are expecting him to be much better than he has ever been. Paying for potential is risky business

Mets: NY has hired Jeremy Hefner to serve as their new pitching coach.

Hefner, 33, the Mets’ next pitching coach, was twice selected by Mets in draft (in 46th and 48th rounds); didn’t sign either time. He eventually did pitch for Mets but now he’ll have an even more key role. He’s only 33 but is on the cutting edge of the new info era. Well regarded

Twins: The Twins have signed LHP Blaine Hardy to a minor league deal, as are catchers Juan Graterol and Ryan Garton.

Astros: Having lost both Robinson Chirinos and Martin Maldonado to free agency, the Astros have now signed backstop Dustin Garneau to a one-year deal.