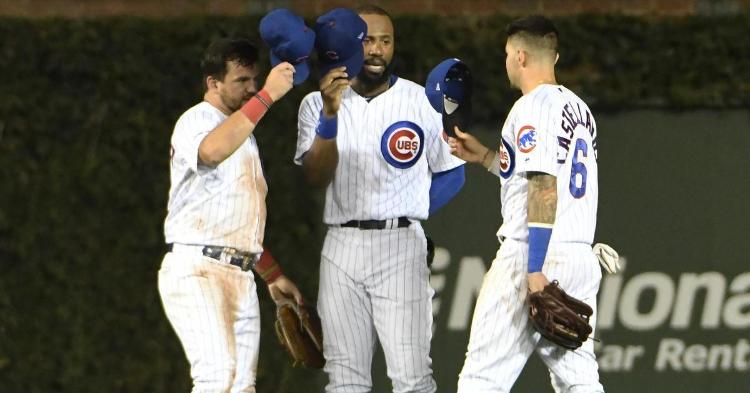 With the Cubs back at Wrigley, you know wins are imminent, and they set out to do just that last night as they opened up the homestand by hosting the Giants. Cole Hamels has had two bad starts in a row (one due to illness), but he was reportedly feeling better and ready to take on Tyler Beede and the Giants.

Nicholas Castellanos and Anthony Rizzo would get the Cubs an early 2-0 lead on a pair of balls that would land in the bleachers. Cubs up 2-0 in the first.

With one swing of the bat, Slater and the Giants would tie it at two in the second.

Wasn’t it recently reported that Rizzo hadn’t hit a homer in over two months? Yeah, well, with this blast, Rizz becomes just the seventh Cub in history with six or more 25-homer seasons. Way to go, Big Guy.

Unfortunately, this lead would be short-lived as well, when Pillar sent one flying in the fourth. Game tied 3-3.

The Cubs would take the lead in the fifth on Jonathan Lucroy’s RBI single, but that’d be all the Cubs would get in this frame. Cubs up 4-3.

The Cubs would put the final nail in the coffin in the seventh, when Tony Kemp hit a sac-fly to the left, scoring Rizzo from third.

Cubs’ Notes: Over the last four games (going into last night), the Cubs’ starting rotation had earned themselves a 0.33 ERA, allowing six walks, with 21 strikeouts and have limited the opposition to a batting average of just .168, with an OPS of .454. The Cubs have earned a total of 54 quality starts in 2019, which ranks fourth behind the Dodgers (69), the Nationals (67) and the Mets (62).

Nick Castellanos: Nick Castellanos seems to keep getting better and better. Going into last night, Castellanos had hit safely in 15 of his first 15 games as a Cub, hammering out 14 extra-base hits (so far) in August, which tied him for the most in the NL (with Charlie Blackmon and JT Realmuto). Castellanos’ 44 doubles also ranks second in the majors, behind Rafael Devers who now has 46.

Javier Báez: Javier Báez’s 66 extra-base hits ranks second among all middle infielders (Bogaerts has 69). Javy also ranks eighth in the NL with 265 total bases this season. Batting .337 with runners in scoring position, El Mago ranks highest among the Cubs and 13th overall in the NL.

We tweeted this out this morning and then news broke that "Matrix 4" just got the green light.

Home Sweet Home: With last night’s win over the Giants, the Cubs have improved to 14-3 over their last 17 home games. While that’s absolutely what makes a championship team, the concern will inevitably shift back to their 25-39 road record and the issues surrounding winning on the road. Hopefully, the series win against Pittsburgh is enough to provide a little shift in the momentum, but their running out of time, as with a win by the Cardinals last night, the Cubs’ elimination number now stands at 38.

Cishek activated: As expected, Cubs reliever Steve Cishek has been activated from the 10-day IL. A roster spot was opened Monday with Bote being optioned to AAA.

Not so little anymore: Amazing what a few years (15 or so) and a lot of hard work does. Here’s Bryzzo in a “before and after” pic.

When the Bryzzo Souvenir Co. was just a twinkle in their eyes. pic.twitter.com/BwCSAwtzeL

Nico on fire: I said the day that the Cubs drafted him, that Nico Hoerner was gold. Hoerner is currently riding a 19-game on-base streak, an eight-game hitting streak and has played in 28 straight games. Smokies’ baseball announcer, Mick Gillespie, says that he also plays with “a sixth tool; his ability to think out the game like a chess master.”

A little analysis of player’s weekend: Bussy knows what’s best, and he feels nicknames like KB, Tony, Left-Hander, and Schwarbs are sort of lame.

Missed Opportunity: I thought the Cubs might explore the possibility of signing speed-demon, Billy Hamilton, after KC cut him loose last week, as they seem to like to add speed when the rosters expand. Not the case this year though (although Kemp’s not precisely a turtle), as Hamilton was picked up by the Braves.

Baseball Quotes: “To talk to people, I have to spend energy talking to them. If I expend my energy on talking to people and making friends, it takes away from the energy I could focus on getting ready to pitch.” -Zack Greinke

One of the beautiful things about baseball is that every once in a while you come into a situation where you want to, and where you have to, reach down and prove something. -Nolan Ryan pic.twitter.com/B3u0xT5PTj 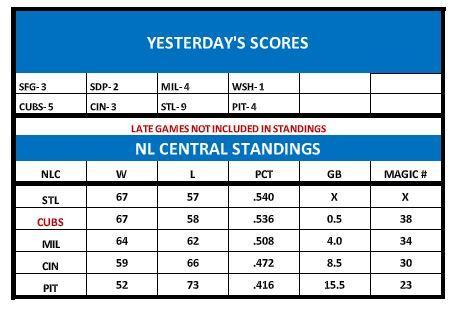