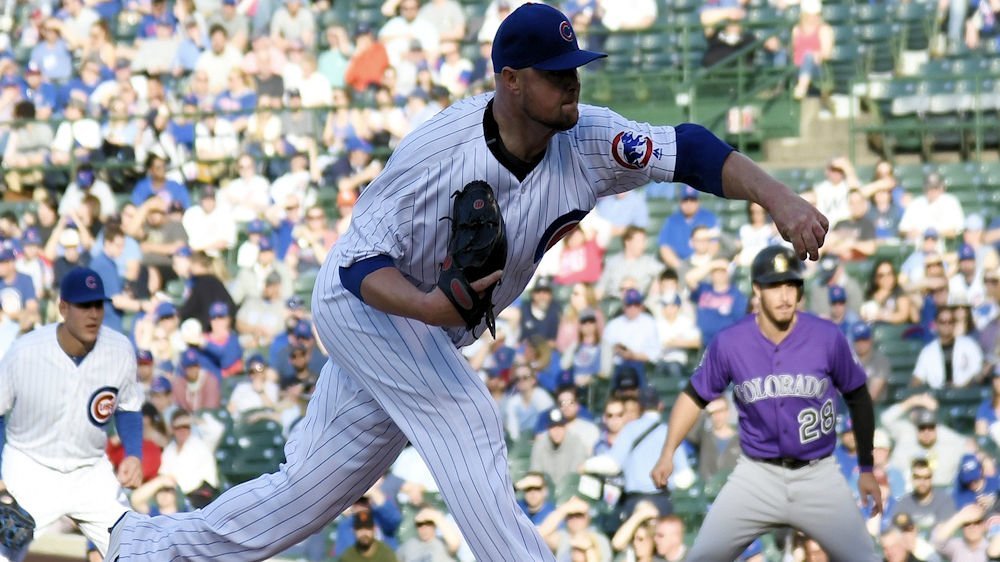 CHICAGO — In a contest that featured multiple wacky moments and clutch defensive plays, the Chicago Cubs (16-10) won their fifth straight by topping the Colorado Rockies (15-15) at home. Taking Rockies starting pitcher Kyle Freeland for six hits, the Cubs came back from a 2-1 deficit to win 3-2.

The Cubs struck first in the contest, with right fielder Ben Zobrist scoring after a quirky ground-rule double. Hitting a shot to third base, Zobrist's double pinged off the bag and into the stands down the left-field line to put Zobrist on second. Thereafter, shortstop Addison Russell brought him home with an RBI single to left-center. Russell finished 2-3 at the plate.

Jon Lester started on the hill for the Cubs, and he pitched well early on. After receiving an unlucky, undeserving losing decision in his last start, Lester was paid back by being bailed out via several standout defensive plays from his teammates, as well as an unintended assist from a Wrigley Field ball boy.

In the fourth frame, Cubs center fielder Albert Almora, Jr., who was just a week removed from a series filled with web gem catches against the Rockies, robbed Colorado again by making an over-the-head snag at the warning track on a ball hit by Rockies shortstop Trevor Story.

Almora, Jr.'s, incredible grab helped to keep Lester's scoreless outing intact, but Lester was tagged for two runs in the fifth. And, if not for a brilliant gun-down by Contreras and the aforementioned interference by a ball boy, the inning could have been far worse for Lester and the Cubs.

With men on first and second and no outs for Colorado, the Rockies' Noel Cuevas was picked off by Contreras at second base while attempting to dive back to the bag.

Willson Contreras unloads a perfect throw behind Noel Cuevas for a successful pickoff attempt at second base in the 5th (00:47)

Thereafter, Cubs second baseman Javier Baez dropped a throw from Contreras while covering first base on a bunt, which proved somewhat costly for Chicago.

A few at-bats later, Rockies center fielder Charlie Blackmon hit a clutch RBI single to center field that made the score 1-1. Then, Colorado third baseman Nolan Arenado hit a screamer down the third-base line. Evidently, the ball boy stationed in foul territory in left field thought that the ball was foul, so he made a grab for it. As a result, the umpires ruled it a dead ball and stopped Arenado at second and Blackmon at third, though Blackmon could have easily scored on the play.

Nolan Arenado drills a double down the line in left, pushing across Charlie Blackmon to hand the Rockies their first lead at 2-1 in the 5th (01:02)

The Rockies failed to score another run in the fifth, thereby meaning that the ball boy's blunder saved the Cubs a run. Chicago quickly took advantage of the lucky break, as Almora, Jr., garnered his eighth RBI of the year on a single to center that scored Russell, knotting the game up at 2-2 in the bottom of the fifth.

Chicago retook the lead in the proceeding inning, thanks to a leadoff triple by slugger Kris Bryant. Marking his second triple of the year and first hit since returning from injury, Bryant scored soon after hitting the three-bagger on an RBI groundout by first baseman Anthony Rizzo.

While Lester pitched an efficient 5.2 innings of five-hit baseball, Cubs reliever Luke Farrell received the win for his 1.1-inning appearance, which was Farrell's first winning decision of the season. Fellow middle relievers Brian Duensing and Steve Cishek combined to secure the 3-2 win for the Cubs in the ninth inning. Cishek accrued his first save of the year, as a result.

With the win, the Cubs took the lead in the National League Central standings, marking the third consecutive year that the North Siders have led their division going into the month of May. The victory also served as the fifth straight win by the Cubs in which they scored three or fewer runs, the first time that feat has ever been accomplished by the North Siders and the first time that any club has accomplished it since 2011.