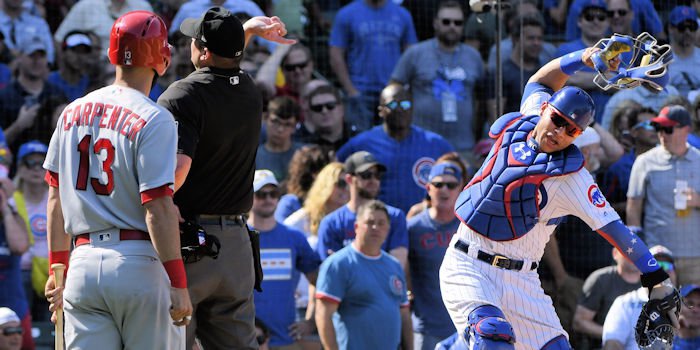 Contreras was upset with the umpire (Matt Marton-USA Today Sports)

Nothing gets a team fired up like a couple of ejections. The Cubs outscored the Cardinals 8-2 on Friday afternoon, most of which came in the sixth inning after heated exchanges between John Lackey, Willson Contreras and home plate umpire Jordan Baker in the fifth.

Early in the first inning, Lackey gave up a solo home run to Tommy Pham. Lackey has consistently had issues with giving up home runs and giving up runs in general in the first inning. It puts a strain on the lineup to produce early and ensures that they are always coming from behind.

Luckily for him, the offense has been on a tear lately and bailed him out of a potential loss. Kris Bryant hit his 27th home run of the year to right-center during the fourth to get it started.

The fifth inning is when all of the fun started. Lackey allowed a single and intentionally walked a batter to bring up the pitcher with two outs in the inning. With two strikes he threw a slider that, according to PitchTrax, went right through the center of the strike zone, but was called a ball by the home plate umpire. On the next pitch, Martinez singled to right field bringing home a run.

Lackey got behind Contreras as if he was going to back up his catcher, but there wasn't going to be a play at the plate. Instead, he barked at Baker about how bad the call was and how the single should never have happened. Baker had enough pretty quickly and tossed Lackey, but that got Contreras fired up. He was so aggressive Joe Maddon and Javier Baez were trying to hold him back. Alex Avila filled in for Contreras and Lackey was replaced by Justin Wilson.

In the sixth, the Cubs exploded for six runs to back their pitcher, but it also served to get John Baker off the hook for nearly costing the Cubs a crucial game. In twelve appearances, the Cubs strung together five hits, two walks, a sacrifice fly and a fielder's choice that did not result in an out.

The game was nearly out of reach, but the Cardinals put together a scary eighth inning against Justin Grimm. With runners on second and first and two outs, Wade Davis relieved him to close out the last 1.1 innings despite it not being a save situation.

The Cleveland Indians have won 22 games in a row passing the 1935 Cubs for most in the league. The 1916 Giants have the longest unbeaten streak ever at 26 games. More interesting than that though is since the Indians have been undefeated, you could watch the Cubs' Game 7 win over the Indians 122 times, rain delay and all, in the same span of time.