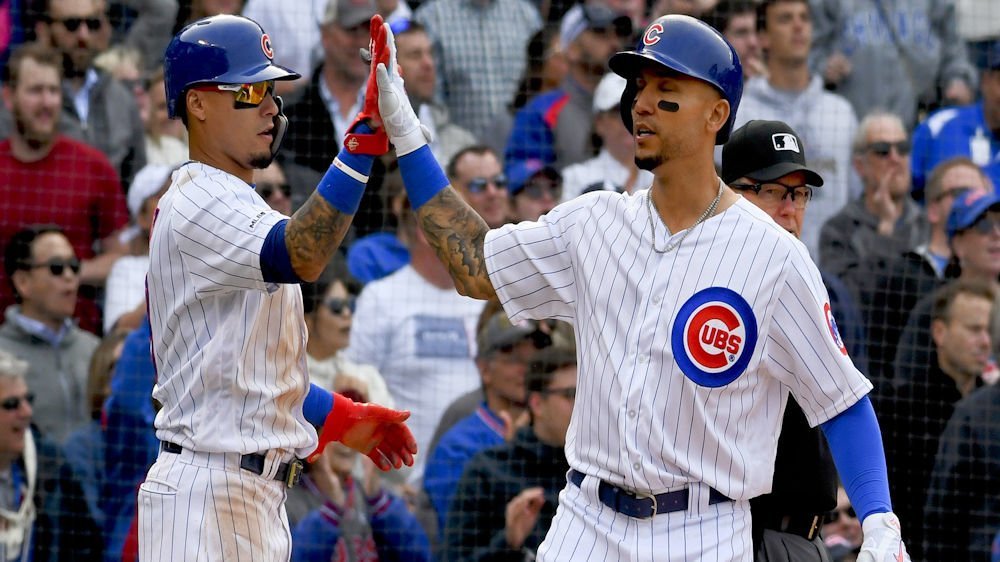 While Javier Baez showed out at the plate, Carlos Gonzalez made a splash in the outfield. (Credit: Matt Marton-USA TODAY Sports)

CHICAGO, Ill. — In need of an offensive uptick, the Chicago Cubs (32-26) experienced just that against the Los Angeles Angels (29-31) on Monday afternoon. With the Angels in town to make up a rainout from April, the Cubs took care of business at Wrigley Field following a lackluster 1-5 showing on a 6-game road trip. The North Siders pounded out 11 hits, including two home runs, in the 8-1 romp and also benefited from a bounce-back start by pitcher Jon Lester.

A surge at the plate by the Cubs in the second half of the contest made the ultimate difference in the game. Prior to the bottom of the sixth, the Cubs led 1-0, but they used a 5-run sixth inning to take control. The Cubs went up 1-0 in the bottom of the fourth on a fielder's choice groundout by Javier Baez that plated Kyle Schwarber. Kris Bryant moved Schwarber into scoring position with his first career bunt single earlier in the inning. Meanwhile, on the mound, Lester rebounded after losing his last three decisions by pitching a 7-inning gem and picking up the win.

As for Angels starter Trevor Cahill, he came unglued on the bump in the bottom of the sixth, and reliever Luis Garcia did not help matters for the Angels after Cahill departed. Baez made the score 2-0 by driving in Bryant on a double that caromed off third base and into left field. A few at-bats later, following a pitching change, Jason Heyward hammered a similar double to the opposite side of the diamond. Bouncing over first base and passed Angels first baseman Albert Pujols, the 2-run double ricocheted off the wall in foul territory down the right-field line, enabling Heyward to coast into second base with ease.

Also in the bottom of the sixth, Addison Russell hit a sacrifice fly that put the Cubs up 5-0, and Kyle Schwarber rounded out the scoring barrage with a bloop single that ushered Heyward home and provided the Cubs with a 6-run edge. Scoring five runs on four hits and three walks, the Cubs dominated at the dish in the sixth frame and cruised to victory thereafter. In the proceeding inning, Baez and teammate Willson Contreras went yard just two plate appearances apart to increase the Cubs' lead. Baez picked up his 14th dinger of the year with a moonshot to left, and, two at-bats later, Contreras skied an opposite-field bomb to right that landed in the basket overhanging the wall for his 13th long ball of 2019.

While the offensive onslaught put on by the Cubs was certainly impressive, perhaps the most impressive moment of the game for Chicago came on defense. Making his Cubs debut, veteran outfielder Carlos Gonzalez started in right field after getting called up from the minors on Monday morning. Gonzalez went a respectable 1-for-3 with one walk on offense, but a spectacular defensive play overshadowed that. Laying out for an unbelievable catch at the warning track in the top of the seventh, Gonzalez robbed the Angels' Jonathan Lucroy of an extra-base hit and incited a raucous reaction from the Cubs fans in attendance, as well as an appreciative Lester. Mike Trout was able to tag up and score on the play to put the Angels on the scoreboard, but the jaw-dropping web gem prevented an Angels rally from developing.

The Angels loaded the bases not long after "CarGo" pulled off his superb snag, but Lester then came through with a clutch inning-ending strikeout to maintain the Cubs' sizable advantage. In the bottom half of the same inning, Baez and Contreras tallied their aforementioned homers, resulting in the eventual final score of 8-1. Baez went 2-for-4 with two runs and three RBI in the win, which saw four different Cubs record multiple hits. Also of note, former Cub Tommy La Stella started at second base for the Angels and went 1-for-3 with one base on balls. Although the first two matchups of the 3-game series were played nearly two months ago, the Cubs technically won the series by coming out on top in Monday's rubber match.