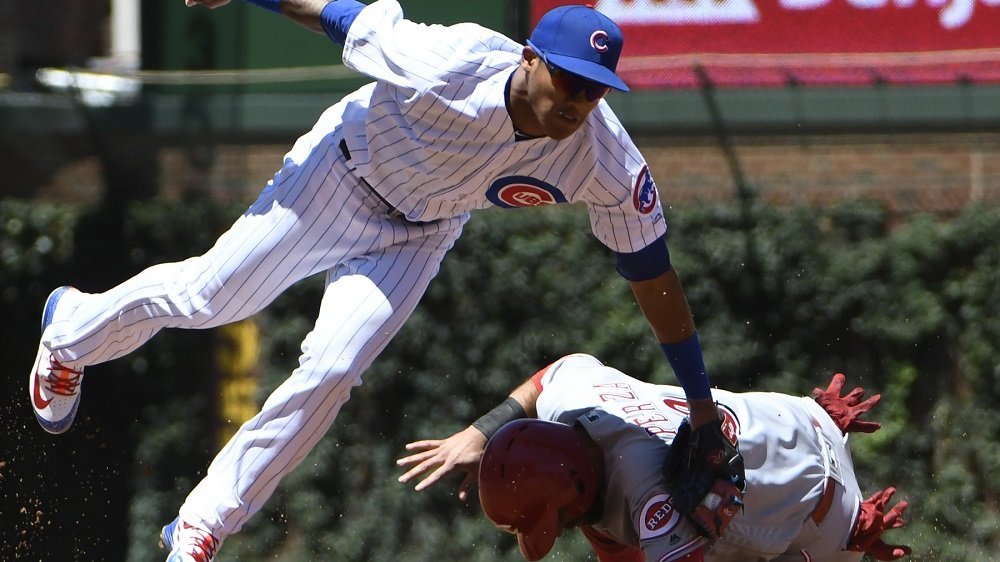 CHICAGO — A six-game win streak that featured plenty of offensive excitement came to a screeching halt for the Chicago Cubs in a defeat to the Cincinnati Reds on Friday. A few weeks removed from enduring a frustrating four-game sweep at the hands of the Reds, the Cubs mustered just two runs on eight hits and provided starting pitcher Mike Montgomery with relatively little support at the plate. Falling 3-2, the Cubs dropped to 3-7 in their 10 games against the Reds this season.

Montgomery struggled mightily in the fourth inning, allowing two runs to score for a lead that the Reds did not relinquish. After giving up a walk and a single in the first two at-bats, Montgomery hit Eugenio Suarez with a pitch to load the bases with no outs. After that, Adam Duvall smacked an RBI single to center field to put the Reds up 1-0. The Cubs picked up a critical 4-6-3 double play on a Scott Schebler grounder in the next at-bat. Joey Votto was able to cross the plate on the play, but that proved to be the last run of the inning for the Reds.

The third run of the day for Cincinnati came in the fifth, when Scooter Gennett hit a sacrifice fly to right that scored Billy Hamilton. Hamilton started the inning off with a single to center and proceeded to take third base on an ensuing single by Jose Peraza. Montgomery finished with six hits and two walks charged to his name in five innings of work. He was handed the loss to fall to 3-3. Making his third start of the year against the Cubs, Reds starter Tyler Mahle threw 6.2 innings of one-run ball. Giving up five hits and two walks and striking out four, Mahle received the win to improve to 7-6.

Mahle gave up his sole run of the afternoon in the bottom of the fifth. After Cubs catcher Willson Contreras, who went 2-4 at the dish, led off with a double, he then advanced to third on a grounder by shortstop Addison Russell. Thereafter, pinch hitter Tommy La Stella drew catcher's interference, which he is one of baseball's best at doing. Then, with runners on the corners and one out, center fielder Albert Almora, Jr., hustled down the line to beat out a throw at first on a potential double play. With the Reds able to get just the out at second base, Contreras came in to score, making it 3-1 and giving Almora, Jr., an RBI.

If not for Cubs right fielder Jason Heyward's expert defense, the Reds would have scored more runs on Friday. In the second inning, Heyward made a sliding catch to prevent a hit and came up with an even more impressive highlight in the sixth. Diving to his right, Heyward snagged a liner off the bat of Jose Peraza to prevent an extra-base hit. The snow-cone grab came with two outs and runners on first and second, thereby saving the Cubs from having their deficit grow.

Chicago had a chance to tie the game in the eighth inning but was able to muster only one run. With one out, third baseman Javier Baez tallied a base knock that forced Reds reliever Michael Lorenzen from the game. After the pitching change, first baseman Anthony Rizzo hit a screamer up the middle to place men on first and third. Rizzo went 2-4 with the bat in the contest. Another pitching change followed, and second baseman Ben Zobrist then brought home Baez with a sacrifice fly to deep center field off Reds closer Raisel Iglesias. If not for the strong wind blowing in, Zobrist's towering fly ball might have left the yard.

Rizzo was able to tag up and reach second on Zobrist's flyout, so the Reds opted to intentionally walk Kyle Schwarber to open up the possibility of a force out. With the tying run in scoring position, Contreras was unable to come through with a clutch hit, as he grounded out to second and ended the inning. The Cubs left 14 stranded on the day, including Ian Happ in the ninth. Happ accrued a one-out single to right and advanced to second on a groundout on the next play. However, Heyward came up small with a chance to bring Happ home, as he hit a soft liner to left field for the final out.

The 3-2 outcome marked the fifth straight loss to the Reds experienced by the Cubs, who now at stand at 49-36. Iglesias garnered his 17th save for the 39-49 Reds, who have won 14 of their last 18 games. The Cubs and the Reds will do battle two more times at Wrigley Field this weekend, with the Cubs aiming to collect wins in the next two contests, which would ensure their third straight series victory.