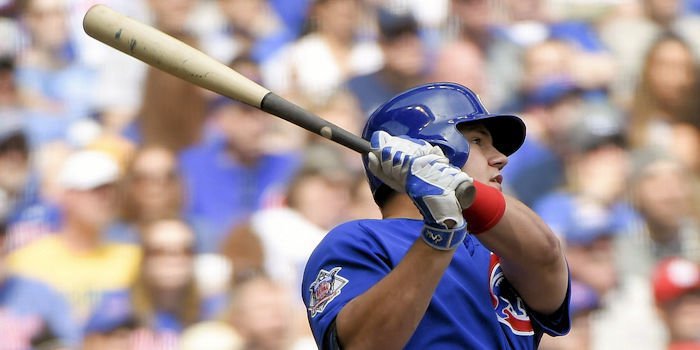 CHICAGO -- For the second time this season, the Chicago Cubs have been swept in a three-game series at home. This time, the Cubs, who had last been swept at home by an American League since 2012 upon entering this series, were skunked by the New York Yankees, as the young, powerful batting order boasted by the Bronx Bombers proved to be too much for the reigning World Series champions over the course of the weekend.

Tonight, the Cubs nearly overcame a sizable deficit to win in extra innings but came up just short. In the first eight innings of the game, the North Siders were victimized by two critical extra-base hits from the Yankees that made all the difference in New York's 5-4 18-inning victory. Despite a quality start from Cubs ace Jon Lester, Chicago was unable to back it up with a quality showing at the plate early on, garnering only five hits before a ninth-inning rally. The Yankees only accrued six hits themselves in that span, but, sparked by a 2-6, two RBI performance by center fielder Jacoby Ellsbury, New York came up with enough big hits to walk away victorious on the road. The Cubs scored three runs in the bottom of the ninth to force extra innings, putting forth a valiant late-game comeback attempt in the process, but went cold at the dish in extras.

The opening inning provided its fair share of excitement on the base path. Ellsbury led off the game with a hit but was picked off at first by Cubs catcher Willson Contreras thereafter. Later in the inning, the Yankees pulled off a double steal that enabled left fielder Aaron Hicks to score from third on a grounder by New York second baseman Starlin Castro.

New York carried that 1-0 lead into the bottom of the third, as starlet Yankees pitcher Luis Severino was stellar to start off. In the third inning, the Cubs finally experienced some success with the bat, as second baseman Javier Baez skied a home run just over the wall in left field. Hit a mile high, the round-tripper mark Baez's fourth homer of the season and occurred not long after Baez fouled a ball off of his foot. Appearing to be in severe pain afterward, Baez was able to recover and collect the home run but hobbled around the bases in so doing. Soon after the dinger, left fielder Kyle Schwarber doubled off of the wall in left but was left stranded as third baseman Kris Bryant struck out looking to end the inning.

With the game knotted up at one, the Cubs wasted a scoring opportunity that came to fruition because of a wild pitch on a swinging third strike by right fielder Ben Zobrist. A walk followed, putting runners on first and second with one out, but two consecutive groundouts ended the inning with no runs produced. Another missed opportunity for the Cubs took place in the next inning, as Schwarber, who went 2-7, was stranded at second after a two-out double.

The Cubs would come to rue those missed chances in the seventh when a costly error and a proceeding triple put them in a 2-1 hole. Bryant has been shaky on the defensive end at times recently, and a wide throw of his on what should have been an easy out at first on a grounder put Castro at second with no outs. Bryant now has five errors on the young season. In the following at-bat, Yankees slugger Aaron Judge smacked a triple to straightaway center, hitting it off of the wall and driving Castro home in the process.

The seventh inning proved to be Lester's final frame. He departed prior to the start of the eighth with a mere three hits and an impressive nine strikeouts to his name, but a couple of big hits resulting in runs marred his start. Fresh off of being called up, reliever Justin Grimm replaced Lester and allowed a two-run shot by Ellsbury to put the Cubs down 4-1.

Severino finished with a stat line that resembled Lester's, as he pitched seven innings, allowed only four hits and struck out nine. However, Severino, avoided giving up crucial hits. In the bottom half of the eighth, Yankees setup man Dellin Betances took the hill and found himself in a bit of jam after walking Schwarber and giving up a single to Bryant. Bryant has now reached base in 18 straight games, but that hit was fruitless, as the Cubs produced outs in the ensuing two at-bats.

The Cubs did not bow out quitely, though, as they tied the game up against former Cub and current Yankee closer Aroldis Chapman. After Chapman gave up a walk and a single in the first two at-bats of his outing, he struck Contreras out swinging but was then victimized by pinch hitter Albert Almora on an RBI single to center. With runners on the corners and one out, Chapman took part in a long, arduous at-bat with Baez that resulted in an RBI single to left by Baez, who later stole second standing up. Chapman then struck out Schwarber for the second out and walked Bryant after that. Chapman, who has a history of coming unglued once his pitch count rises, proceeded to hit Cubs first baseman Anthony Rizzo to bring home the tying run.

Chapman was then pulled from the game and replaced with reliever Tyler Clippard, who forced Zobrist into an inning-ending groundout. The Cubs had done their damage, however, scoring three runs to force the game into extra innings. Dominant pitching featured heavily in the early goings of extras, with 10 consecutive strikeouts at one point, which contributed heavily to the major league record of 48 strikeouts in the game.

Schwarber made the defensive play of the game (and perhaps the season) on a Derek Jeter-like catch of a foul ball while falling into the bleachers down the left field line in the top of the 12th. That seemed to rejuvenate the Cubs, as Rizzo doubled to lead off the bottom half of the inning and was able to take third by tagging up on a fly ball thereafter. However, the Cubs, who are the worst team in baseball at driving home runners in scoring position, failed to get the ball out of the infield for the remainder of the inning, ushering in the 13th.

It took approximately six hours, but the marathon game between MLB's two most storied franchises finally came to an end in the 18th, as former Cub Castro hit an RBI groundout that provided the Yankees with what proved to be the winning run, driving in outfielder Aaron Hicks. Hicks originally made it on base by way of a gutsy bunt, and he took second on a throwing error by Contreras that followed the bunt. He was then moved over to third via a sacrifice and made it home on Castro's grounder.

Capping off a night in which both teams went deep into their bullpens, even resorting to pinch-hitting with pitchers, Chasen Shreve (1-0) of the Yankees (20-9) earned the win by striking out Cubs pitcher Kyle Hendricks in the bottom of the 18th to secure the Yankees' 5-4 win and three-game sweep versus the Cubs (16-15). Cubs reliever Pedro Strop (0-2) earned the loss for giving up the winning run in the top of the 18th. The Cubs, who are now an underwhelming 10-8 in their last 18 games will look to return to top form on their upcoming six-game road trip, which will be an even tougher road trip than usual after Sunday's game effectively served as a taxing nighttime double-header.

With @advocatehealth, we honor those who have fought and are still fighting breast cancer. #PinkOut pic.twitter.com/VGzCotJzft