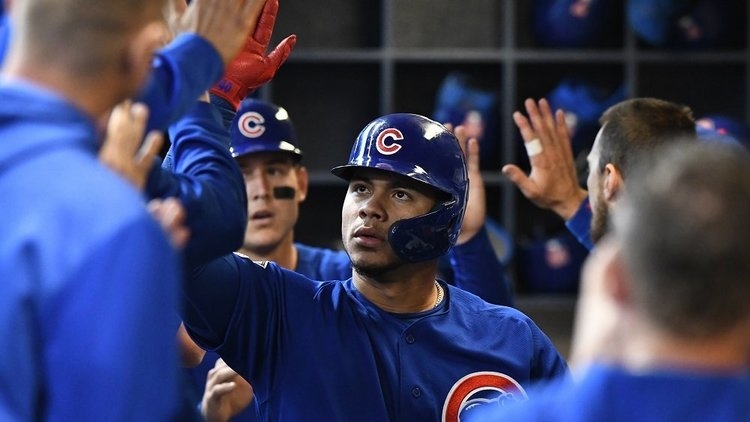 Willson Contreras provided the Cubs with their only runs via a 2-run homer. (Credit: Michael McLoone-USA TODAY Sports)

MILWAUKEE, Wis. — As the reigning National League MVP and one of Javier Baez's few challengers in the ranks of top offensive threats in the National League Central, Milwaukee Brewers (8-2) right fielder Christian Yelich has consistently played his best while competing against the Chicago Cubs (2-7) as a member of the Brewers. With a 2-for-3 outing in the rubber match of the 3-game set at Miller Park on Sunday that included the 100th home run of his career, Yelich tallied three RBI and contributed heavily to the Cubs falling 4-2 and missing out on a chance to win a series for the first time this season.

Kyle Hendricks got the nod to start on the mound for the Cubs, and he failed to bounce back from a lackluster start in his first appearance of the year this past Monday. The right-hander gave up four runs on eight hits in four innings of work and fell to 0-2 as a result. The deadly 1-2 punch of leadoff man Lorenzo Cain and Yelich at the top of the Brewers' batting order provided the Brewers with some early runs. A single by Cain in Milwaukee's first plate appearance of the afternoon was followed by a 408-foot bomb from Yelich. The next time around, Cain and Yelich hit back-to-back singles, and Travis Shaw then plated Cain with an RBI single to give the Brewers a 3-0 lead in the third.

Yelich's third RBI came on a sacrifice fly with the bases juiced in the fourth, and Hendricks was pinch-hit for in the top half of the ensuing inning, thereby ending his afternoon. Meanwhile, Brewers hurler Zach Davies dominated through his first five innings on the bump. However, a couple of fluky singles by the Cubs in the sixth set the stage for Chicago catcher Willson Contreras to go yard for the third time this season with a 390-foot round-tripper to the opposite field. The 2-run blast to right scored first baseman Anthony Rizzo and pulled the Cubs to within two runs of the Brewers.

Chicago failed to record a run the rest of the way, thanks in large part to fireballer Josh Hader. The Brewers' ace reliever entered the game with runners on the corners and one out in the seventh and drew two outs to prevent the Cubs from scoring. Chicago was 1-for-7 with runners in scoring position on the day. Hader proceeded to go three up, three down in both the eighth and ninth frames, registering three strikeouts in a flawless appearance that earned him his fifth save and secured a 4-2 win for the Brew Crew.

The Cubs notched six hits in the loss, and leadoff man Ben Zobrist garnered three of them. After losing two out of three at Miller Park, the Cubs will finally take the field in front of their home crowd tomorrow, with Chicago's 9-game road trip to start the season coming to a close. The North Siders are slated to battle the Pittsburgh Pirates (5-3) at Wrigley Field for the next three games. The first pitch of Monday's series opener is scheduled for 1:20 p.m. CDT.