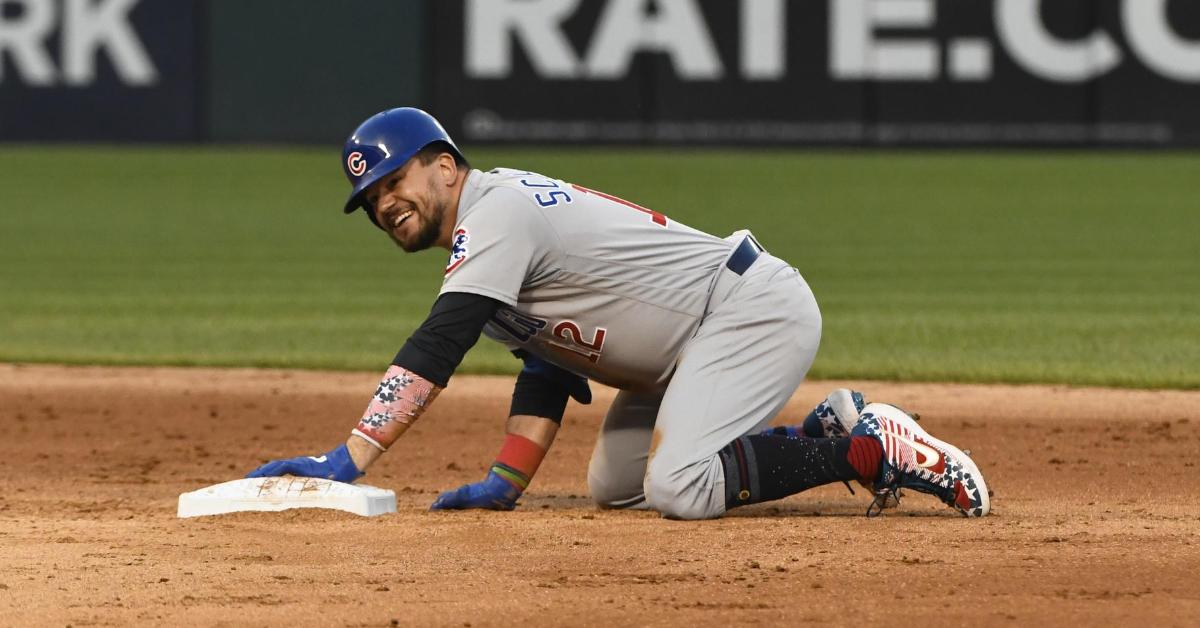 Kyle Schwarber could not help but chuckle after turning what he thought to be a foul ball into a 2-run double. (Credit: Matt Marton-USA TODAY Sports)

CHICAGO — Thanks to a 5-run fifth inning, the Chicago Cubs (47-42) moved within one win of undisputedly claiming the 2019 Crosstown Cup against the Chicago White Sox (41-44) on Saturday. After the two clubs split the 2-game series at Wrigley Field a few weeks ago, the series moved to the South Side for a 2-game set at Guaranteed Rate Field. By plating five runs in the fifth, the Cubs took a commanding 6-1 lead and were able to hold off the White Sox the rest of the way, with the North Siders winning 6-3 to take a 2-1 lead in the season series.

While the Cubs tallied seven hits, the nine walks that they drew made quite the impact. Going 4-for-9 with runners in scoring position, the Cubs fared well in critical at-bats on the night and chased burgeoning White Sox ace Lucas Giolito from the game after just four innings pitched. Meanwhile, Cubs starter Jon Lester produced a solid 6 1/3-innings start, in which he struck out three, and, following Lester's departure, the Cubs' bullpen teamed up for a scoreless effort to finish off the victory.

Shortstop Javier Baez proved to be a spark plug for the Cubs, and he kicked the action off with a double in the top of the first. Thereafter, Baez took a major risk on the basepaths that paid off. Baez evidently noticed that White Sox left fielder Eloy Jimenez was struggling to locate a bloop hit off the bat of Cubs third baseman Kris Bryant, so he took off for third before it was even a guarantee that the ball would fall in for a single, which it ultimately did. That enabled Baez to score with ease and put the Cubs up 1-0.

Chicago @Cubs up early thanks to Kris Bryant!

The White Sox knotted the game up at 1-1 in the bottom of the third via an RBI single by Jose Abreu that plated Yoan Moncada, who hit a ground-rule double in the previous at-bat. While the early goings of the contest served as evenly matched affair, the Cubs took control in the top of the fifth. Giolito walked the first three batters of the frame, and Cubs left fielder Kyle Schwarber then took advantage of the bases-loaded opportunity by hitting an opposite-field double near the left-field line. Schwarber initially thought that he had smacked the ball foul, but the blooper descended into fair territory and ushered two runners home, thereby making the score 3-1.

Baez followed that up with a screamer down the third baseline that a diving Moncada was unable to snag. Two more runs came across on Baez's second 2-bagger of the game, as the Cubs boasted a 5-1 advantage at that point. Giolito was removed following Baez's 2-run double, and his replacement on the hill, Evan Marshall, experienced a short-lived outing. Marshall walked Bryant and next gave up an RBI single to first baseman Anthony Rizzo before walking catcher Willson Contreras. Jace Fry took Marshall's place on the mound after that, and he collected a strikeout and an inning-ending double play in consecutive at-bats to bring an end to the Cubs' scoring barrage.

JAVY!@Cubs now with a 5-1 lead over their cross-town rival! pic.twitter.com/9qWyxKx9hg

The White Sox did not go away quietly, with the South Siders cutting into the Cubs' lead by scoring two runs in the bottom of the seventh. A pair of Cubs errors benefited the White Sox and led to Lester getting yanked with one out in the inning. Cubs third baseman David Bote suffered a fielding error to start the frame, and, a few plate appearances later, Moncada recorded an RBI double that brought an end to Lester's outing. Moncada made it to third base because of a throwing error committed by Baez on the play, and Abreu proceeded to push Moncada across with an ensuing RBI groundout.

In the bottom of the ninth, the White Sox put two men on base against Cubs closer Craig Kimbrel but were unable to accrue any runs, as Kimbrel, who tallied three strikeouts in the ninth, secured the Cubs' 6-3 triumph for his second save as a Cub. The final matchup of the season between the Cubs and the White Sox is scheduled for Sunday, and with a win, the Cubs would be crowned the outright victors of this year's Crosstown Classic.