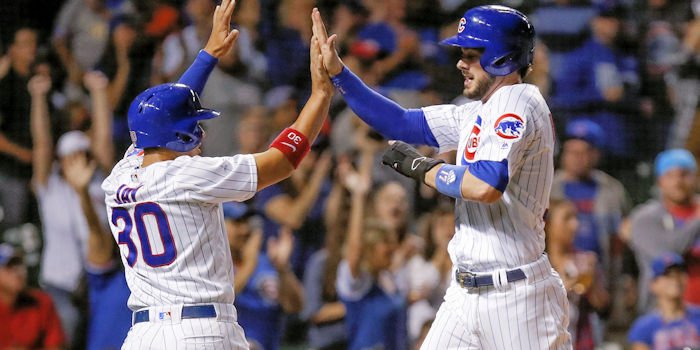 CHICAGO -- The Chicago Cubs should always play against the lowly Mets when they need to get healthy offensively as they had an impressive 14 hits on Thursday night as they brought out the brooms and swept New York 14-6 at Wrigley Field.

They now have a healthy three-game lead in the division, and their magic number is down to 14.

The game started a little nerve-wracking as Jen-Ho Tseng pitched only three innings giving up five runs and struck out six batters in 70 pitches. The Cubs' minor league Pitcher of the Year told reporters after the game that he was a little nervous in his major league debut.

On the offensive side of things, Anthony Rizzo was a triple shy of the cycle and crushed his 32nd homer of the season off of righty starter Seth Lugo in the third inning. He also had two stolen bases on the night to show off his all-around game.

Jason Heyward had a three-run homer to right field in the sixth inning off of reliever Paul Sewald and had four RBIs on the evening. It was Heyward's 10th homer of the season in his comeback campaign after a horrid 2016 season offensively.

Veteran pitcher John Lackey will start Friday at 1:20 p.m. CT against the Cardinals at Wrigley Field. In his last ten starts, he has an impressive 3.67 ERA.