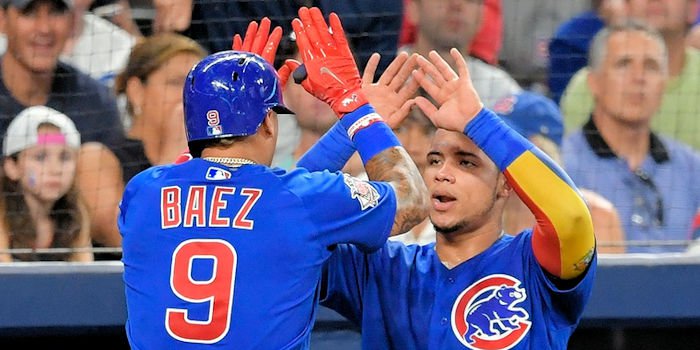 ATLANTA -- The Chicago Cubs are now resembling the team from last year's Championship run as they have won their fifth straight game out of the All-Star break in a 5-1 win over the Atlanta Braves on Tuesday night. The winning streak matches their season high wins in a row.

With the win, the Cubs are only 2.5 games back of the first place Milwaukee Brewers in the National League Central division. Just three games ago, the Cubs were 5.5 games back in the division.

The game didn't start until a two and a half hour rain delay that saw little rain until the tarp was pulled out on three different occasions at Sun-Trust Park.

The Braves started off well once the game got started with a homer by Nick Markakis in the second inning off of veteran righty John Lackey to put the Braves up 1-0.

In the third inning, Javier Baez tied the game up with a solo line drive homer which was his 11th dinger of the season and he had three hits on the evening.

Javier Baez ties it with a home run! What a rocket #Cubs pic.twitter.com/j23RM7aiyv

Willson Contreras finished off the inning with a two out, three-run homer to center field to put the Cubs up 4-1 on the night. The blast was his 13th of the season, and it was the 13th homer the Cubs have hit since after the All-Star break. The Cubs may have found their permanent No. 4 hitter because Contreras has hit five homers in only 12 starts in the cleanup position.

In his last 12 games in the month of July, he has hit four homers and drove in 10 RBI.

Lackey picked up his first win since June 18 going five innings giving up five hits, one run, and two walks. He has given up 25 homers on the season which leads the league and it is the most home runs he has given up since 2013.

Mike Montgomery will face off against knuckleballer R.A. Dickey on Wednesday's 11:10 AM CDT game. Montgomery is 1-3 with 5.77 ERA in seven starts this season.