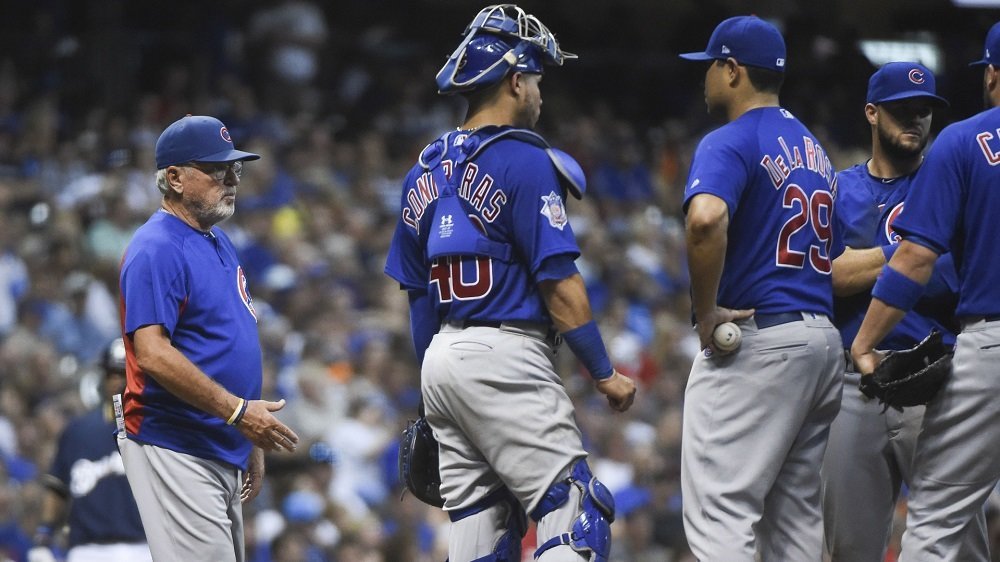 Nothing seemed to work on the mound for the Chicago Cubs in their loss on Tuesday. (Photo Credit: Benny Sieu-USA TODAY Sports)

MILWAUKEE — Struggling in every phase of the game, the Chicago Cubs were lackluster at the plate, in the field and on the mound throughout their lopsided loss to the rival Milwaukee Brewers on Tuesday. Garnering only five hits, the Cubs were romped 11-1 at Miller Park, as the Brewers cut into the Cubs' divisional lead yet again after pulling off a thrilling win in the opener of the three-game set on Monday.

The Cubs' only run of the ballgame was very ironic in the fact that it came on a play that featured a Brewers error. Ironic because of the fact that the Cubs committed three errors as part of a dreadful defensive performance, the second-inning throwing error by Brewers shortstop Orlando Arcia was twofold. For one, Cubs third baseman David Bote, who led off with a double, opted to go home on an infield dribbler hit by catcher Willson Contreras when he should not have.

Arcia quickly got to the ball and would have had a golden opportunity to throw Bote out at the plate had he fielded it cleanly. Instead, Arcia was forced to opt for the force out at first base, but he did not get that right, either. Making a throwing error on the play, Arcia enabled Contreras, who was credited with an RBI, to reach base. However, that proved to be the Cubs' lone offensive success of the evening.

A lack of hitting production was not the Cubs' biggest issue, though, as Chicago's pitching was horrendous. Cubs starter Mike Montgomery lasted only four innings on the hill and was lucky to give up just two runs. The Brewers scored their first run of the contest on a wild pitch by Montgomery in the second frame and did not let off the gas after that. Montgomery accrued the loss, making him 4-5 on the year, and Brewers starter Wade Miley, who pitched six innings of one-run ball, took home the win to become 3-2.

The Brew Crew took a 3-1 lead over the course of the next few innings on a pair of sacrifice flies. The Cubs came unglued in the sixth inning, when a combination of two errors and one passed ball culminated in Milwaukee pushing three runs across the plate to go up 6-1. Chicago shortstop Addison Russell was especially inadequate on defense during the course of the contest, as he committed numerous blunders, one of which was charged as an error, and even broke his belt while failing to make a diving catch of a line drive.

Five of the six pitchers to toe the rubber for the North Siders on the night were charged with at least one run. Fresh off a month-long injury layoff, Cubs middle reliever Brian Duensing got taken for three runs in the seventh. A sacrifice fly resulted in the first of those runs, and a two-run double by Christian Yelich, the hero of game one for Milwaukee, was the source of the other two runs. James Norwood actually gave up the two-run double to Yelich, but the runners who scored on the play were put on base by Duensing.

To cap off the slaughter, Jonathan Schoop provided the Brewers with a double-digit lead on a two-run single with two outs in the bottom of the eighth. Winning 11-1 over Chicago (81-57), Milwaukee (79-61) finished with 10 hits and eight walks in its second straight victory over the rival Cubs. The Cubs, who have now lost two in a row after winning nine of 11, currently lead the Brewers by just three games in the National League Central.