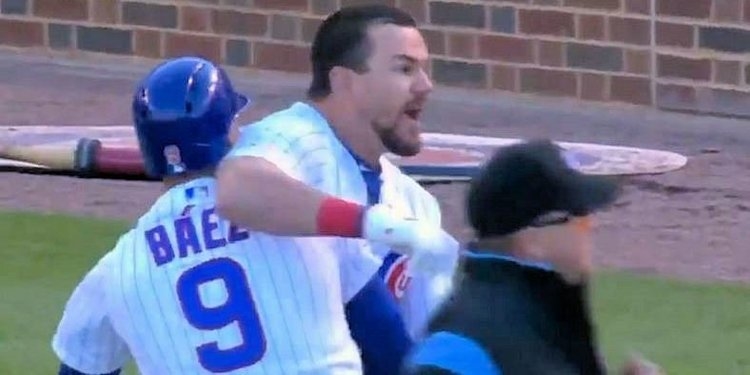 Evidently, Hell hath no fury like a Schwarber scorned. The gentle giant erupted after being called out on a checked swing to end the game.

CHICAGO, Ill. – Despite a late rally, the Chicago Cubs (5-9) fell short to the Los Angeles Angels (8-7) at Wrigley Field on Saturday. The Halos gained a 3-run advantage in the second inning and never let their lead slip away, with the Cubs seeing their comeback hopes squashed on a questionable checked-swing strike call in the bottom of the ninth. Plenty of what-ifs occurred for the Cubs throughout the course of the loss, leading to a deflating 6-5 defeat.

With a runner on first and no outs in the top of the second, an eager Cubs fan helped to spark an Angels run by catching a foul ball on the third-base side that pursuing Cubs infielders Javier Baez and David Bote could have potentially caught for an out. Instead, the batter, Brian Goodwin, utilized his second chance to the Angels' advantage by smacking a single to right that placed runners on the corners. After that, an RBI single put Los Angeles on the board, and Angels newcomer Tommy La Stella then drew a catcher's interference, which he was known for doing while a member of the Cubs.

This was an unfortunate series of events to start the three-run inning. No errors were charged either, tough break for Hendricks. pic.twitter.com/oZ4RH8w5iT

Cubs starting pitcher Kyle Hendricks took the brunt of the Angels' second-inning surge, giving up three runs on four hits in the frame by the time that it was all said and done. Hendricks went on to pitch five innings, and each of the runs that he allowed in his third losing start of the season came in the top of the second.

Neither team was particularly effective at hitting the ball with runners on base, with a combined 21 men left stranded in the contest. Baez was able to come through with an RBI double in the third to make the score 3-1, but catcher Willson Contreras struck out with two outs and the bases loaded. In the fifth, Baez, who went 3-for-5 on the afternoon, came through with his second RBI double of the game to pull the Cubs to within a run of the Angels, but Cubs relief struggled in the sixth and gave up two additional runs to the Angels.

The Chicago bullpen allowed three runs total to score, including two that came across in the sixth on back-to-back bases-loaded walks. Trailing 6-2 late, Cubs outfielder Jason Heyward started a rally with a one-out double in the eighth. Heyward and Contreras later scored on a two-out single by Mark Zagunis.

The bottom of the ninth featured a shaky appearance by Angels reliever Cody Allen. After issuing a one-out walk to Anthony Rizzo, Allen gave up a double to Baez, which was essentially a routine single to center that the intrepid "El Mago" riskily stretched into a two-bagger.

After that, the excitement escalated. Heyward hit a fly ball down the left-field line that Goodwin unnecessarily slid underneath in order to make what should have been a relatively simple catch. Instead, the ball bounced off Goodwin's glove in fair territory, and the error allowed Rizzo to score and advanced Heyward to second and Baez to third. Allen was able to collect two consecutive strikeouts thereafter but not without controversy.

Following a strikeout by Contreras for the second out, Chicago left fielder Kyle Schwarber got rung up by the third-base umpire on a checked swing. Facing a full count, Schwarber seemed to think that he was able to hold his swing up on what would have been ball four, but the third-base umpired ruled that he went around for the third strike. The usually calm and collected Schwarber was furious with the call and got subsequently ejected from the finished ballgame for angrily storming after the umpire while shouting obscenities at him. The unusual ending that technically included a postgame ejection was fitting for 6-5 ballgame that featured several momentum swings brought on by strange circumstances.