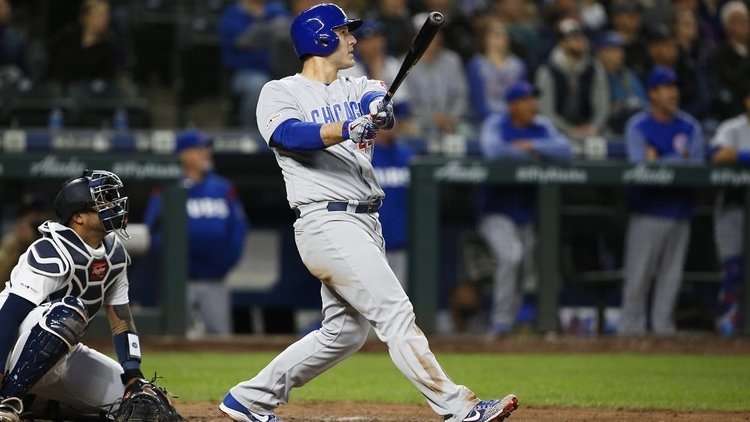 Anthony Rizzo hit one of three home runs powered out by the Cubs on the night. (Credit: Joe Nicholson-USA TODAY Sports)

SEATTLE, Wash. — Playing a late-night West Coast game for the first time this season, the hot-hitting Chicago Cubs (15-12) showed no signs of fatigue with a 10-hit performance against the Seattle Mariners (18-14) at T-Mobile Park on Tuesday. Thriving by way of the home-run ball, the Cubs hit three dingers, including their first homer out of the leadoff spot in 2019, and were able to stave off a ninth-inning rally by the Mariners and earn a thrilling 6-5 win on the road.

Game one of the 2-game interleague set started with a bang, as Cubs leadoff man Daniel Descalso started the matchup off by clubbing the first round-tripper tallied by a Cub batting in the leadoff spot this season. The 393-foot blast to right-center provided the Cubs with a 1-0 lead just one at-bat into the game. Chicago went up 2-0 in the top of the fourth, thanks to a 2-out single hit up the middle by Albert Almora Jr. that plated David Bote. Veteran Mariners ace Felix Hernandez started on the mound for Seattle and produced a 6-inning start, in which he gave up four runs on eight hits and struck out eight.

Cole Hamels got the nod to toe the rubber for the Cubs, with the left-hander fanning seven in 5 1/3 innings of work. Hamels struggled in the bottom of the third, as the Mariners pushed three runs across to go up 3-2. Defensive blunders did not help Hamels' cause, as errors suffered by third baseman David Bote and shortstop Javier Baez on back-to-back plays contributed to Seattle scoring runs two and three with two outs.

Cubs first baseman Anthony Rizzo made up for it with a 2-run blast that placed Chicago back in front in the ensuing inning. The 389-footer marked Rizzo's sixth long ball of the season, and it scored Kris Bryant, who led off the fifth frame with a double to left field. Mariners second baseman Dee Gordon went on to knot the game up at 4-4 with an RBI single in the bottom half of the next inning that chased Hamels from the game. Cubs reliever Brandon Kintzler then entered and, after issuing a walk, was able to escape a bases-loaded jam by forcing Domingo Santana to hit into an inning-ending double play.

Kintzler was not so fortunate in the seventh, as he gave up a leadoff home run to slugger Edwin Encarnacion that pushed the Mariners in front by a score of 5-4. In the top of the eighth, the Cubs came through again with their third go-ahead homer of the evening. Smacking a mammoth 440-foot rainmaker beyond right field, Chicago left fielder Kyle Schwarber tagged Seattle reliever Brandon Brennan with a 2-run bomb to provide the Cubs with a 6-5 lead.

Former Mariner Steve Cishek pitched 1 1/3 innings in relief for the Cubs and collected his first save of the spring. The reliever gathered himself after getting off to a rocky start in the bottom of the ninth and drew a pivotal double play that was followed by a game-ending punch out of designated hitter Jay Bruce to secure the 6-5 win for the Cubbies. All in all, Seattle left nine men stranded on base and went 3-for-15 with runners in scoring position.