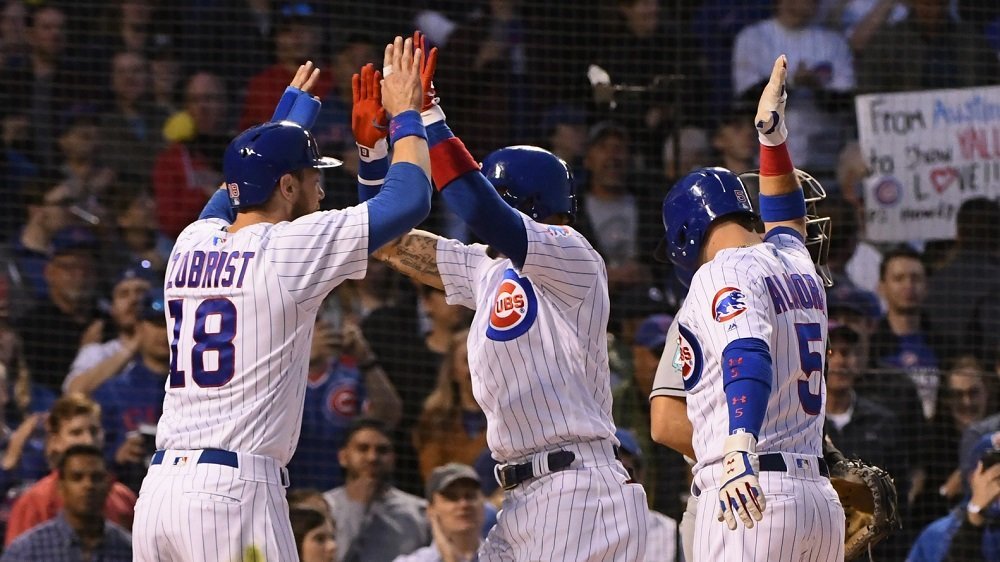 CHICAGO — In need of a spark after suffering through a grueling five-game losing streak, the Chicago Cubs took out their frustrations on the bottom-feeder Miami Marlins at Wrigley Field on Monday night.

Riding four home runs to a dominant 14-2 win, the Cubs chased Marlins starter Jarlin Garcia from the game after four innings on the hill. Chicago was led by a dominant 3-4 outing from third baseman Kris Bryant, with the Cubs collecting 15 total hits as part of an all-around elite hitting performance.

Bryant opened the scoring action with a two-run bomb to left in the first inning. His fifth blast of the year, Bryant got ahold of an inside fastball from Garcia, skying it to left to score Ben Zobrist, who walked in the previous at-bat.

In the fourth frame, left fielder Ian Happ gave the Cubs a sizable lead on a two-run blast to center that brought in shortstop Addison Russell, who walked to lead off the inning.

Ian Happ tees off in the bottom of the 4th inning for the solo home run to center field to extend the lead for the Cubs #EverybodyIn pic.twitter.com/qG2QaLyhZB

The Marlins finally got on the board in the fifth, with Derek Dietrich scoring on a fielder's choice grounder. However, Russell neutralized that run and then some with a two-run double in the bottom half of the inning, scoring Bryant and first baseman Victor Caratini on the hit.

The Marlins had a chance to make up some ground in the seventh, as outfielder Cameron Maybin brought in a run via a single, but Happ gunned Maybin down at second to end the inning. Unfortunately for Chicago, Baez left the game due to a groin injury in the top half of the seventh and did not return.

Happ put the game virtually out of reach in the bottom of the seventh with his second home run of the night. A line-drive homer to opposite field, the three-run long ball served as Happ's fifth home run of the season and provided him with a career-high five RBI.

.@ihapp_1 homers from both sides of the plate and sets a career high with five RBI! #EverybodyIn pic.twitter.com/8WlBB39xBt

Interestingly, the dinger came from the left side of the plate, while Happ's earlier homer came from the right side of the dish. As a result, Happ became the first Cub to hit a home run from both sides of the plate in a single game since Dioner Navarro did so in 2013. Also of note, the round-tripper was Happ's third hit of the season versus the Marlins, and all three of those hits have been home runs.

Chicago tacked on two more runs in the eighth via RBI singles from Tommy La Stella and Willson Contreras. With the exception of pitcher Kyle Hendricks, every Cubs starter collected a hit on the night.

With the 14-2 win over the Marlins (13-21), the Cubs (17-15) snapped a five-game skid in electrifying fashion. Hendricks, who threw eight innings of six-hit ball, received the win to become 3-2 overall, while Garcia accrued his first losing decision of the year to become 1-1.