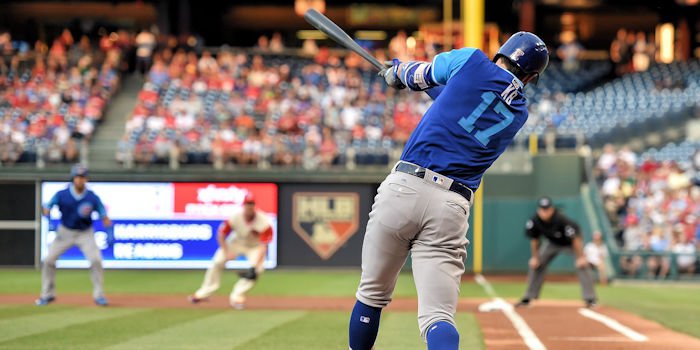 Kris Bryant was one of four Cubs to hit a home run on the night, with two of those four hitting multiple bombs. (Photo Credit: John Geliebter-USA TODAY Sports)

PHILADELPHIA – The home-run ball has been a mainstay of the Chicago Cubs' 2017 season, with the North Siders having taken part in a shockingly high number of video game-like contests in which home runs were aplenty. Saturday's clash with the Philadelphia Phillies, though, was in a league of its own, with the two teams combining for an incredible seven home runs in the first four and a half innings. Adding to the uncanny nature of the game was the fact that the Cubs' most exciting offensive output came in the seventh inning, a seven-run showing which featured no home runs. Winning 17-2 behind 14 hits and six home runs, the Cubs (69-59) pummeled the Phillies (47-80) from start to finish en route to a blowout victory.

The Phillies struck early on the night and failed to strike again, with their only two runs coming on a two-run homer by left fielder Rhys Hoskins in the bottom of the first. Hoskins, who went 2-4 at the plate, has quickly established himself as a rookie sensation for the rebuilding Phillies, as the first-year right-hander has already hit 10 home runs in just 17 games, making him the fastest player to reach the 10-homer mark in Major League Baseball history.

Hoskins proved to be a one-man show on the evening, though, as the Phillies accrued a mediocre eight hits and an unimpressive zero walks. As for the Cubs, the batting order was effective from top to bottom, with four players experiencing multi-hit performances. First baseman Anthony Rizzo was especially effective, as the power hitter had an incredible 3-5 outing that saw him hit two home runs and accrue five RBI.

Tommy La Stella, who got the start at second base for the Cubs tonight, incited the scoring for Chicago, though, by drilling a solo home run to right-center in the top of the second. La Stella definitely had his best offensive showing of the season on Saturday, going 3-5 with four RBI and two home runs to show for it. Rizzo smacked his first long ball of the night in third inning, hitting a three-run bomb to straightaway center field, putting the Cubs up 4-2.

In the fifth, the dynamic duo of Rizzo and third baseman Kris Bryant increased the Cubs' lead, with Bryzzo going for back-to-back solo shots. Rizzo's night resulted in him achieving season milestones, with the left-hander reaching the 30-homer and 90-RBI marks on the year. Helping his cause was the presence of rookie starting pitcher Ben Lively on the mound for the Phillies. Lasting five innings, Lively, who showed signs of poise at times, struggled overall, getting taken deep on four occasions. Despite collecting an impressive eight strikeouts, Lively gave up six runs, resulting in the youngster earning the loss to drop to 1-6 overall.

Rizzo with his 2nd back to back after Bryant pic.twitter.com/UlmY4UFn1q

On the hill for the Cubs was ace Kyle Hendricks, who overcame a rough start to pitch seven quality innings and earn his first win since May. Standing at 5-4 overall, Hendricks struck out eight batters on the evening and allowed a respectable six hits. He even excelled on the hitting front, batting a leadoff single that sparked the Cubs' seven-run seventh. Following the hit by Hendricks, right fielder Jon Jay doubled off of Phillies reliever Drew Anderson. Two at-bats later, Bryant was walked to load the bases, and the Cubs opened the floodgates thereafter, tagging Anderson and fellow Philadelphia relief pitcher Jesen Therrien for four straight hits.

First, Rizzo beat out a throw at first for an infield single that scored Hendricks. Then, catcher Alex Avila smashed a double to deep right-center that scored Jay and Bryant. Next, following a pitching change, center fielder Albert Almora, Jr., and La Stella hit RBI singles in consecutive at-bats to push the Cubs' lead to 11-2. Finally, capping off the scoring barrage, Hendricks appropriately brought the inning full circle with a two-run double to right on the pitcher's first two-bagger of the season.

La Stella was not done with his heroics, however, as the spark plug, who had just three home runs all year entering tonight's contest, hit his second dinger of the ballgame in the top of the ninth, scoring Avila in the process. Two at-bats after that, pinch hitter Ben Zobrist reciprocated La Stella's two-run shot with one of his own, scoring shortstop Javier Baez on a blast to right for his ninth home run of 2017.

LaStella with his 2nd of the night. pic.twitter.com/7sHfijX3Q4

With nine extra-base hits, including six round-trippers, the Cubs were certainly feeling it at the dish tonight, making up for their lowly one-run performance from Friday. Marking their highest run total of the season, the 17 runs scored by the Cubs in their 15-run thrashing of the Phillies on Saturday were indicative of a season for Chicago that has come to be defined by living and dying via the home run. Up and down on offense as of late, the Cubs will look to build off of their 14-hit explosion as they aim to increase their National League Central lead in the coming weeks. But, although they may do that, tonight's six-homer showing will likely stand the test of time as the most magical night with the bat of the Cubs' 2017 slate.

WATCH: Hendricks on his two hits in one inning: https://t.co/fa5Y5TU5lA pic.twitter.com/HNlpTV4Zz0