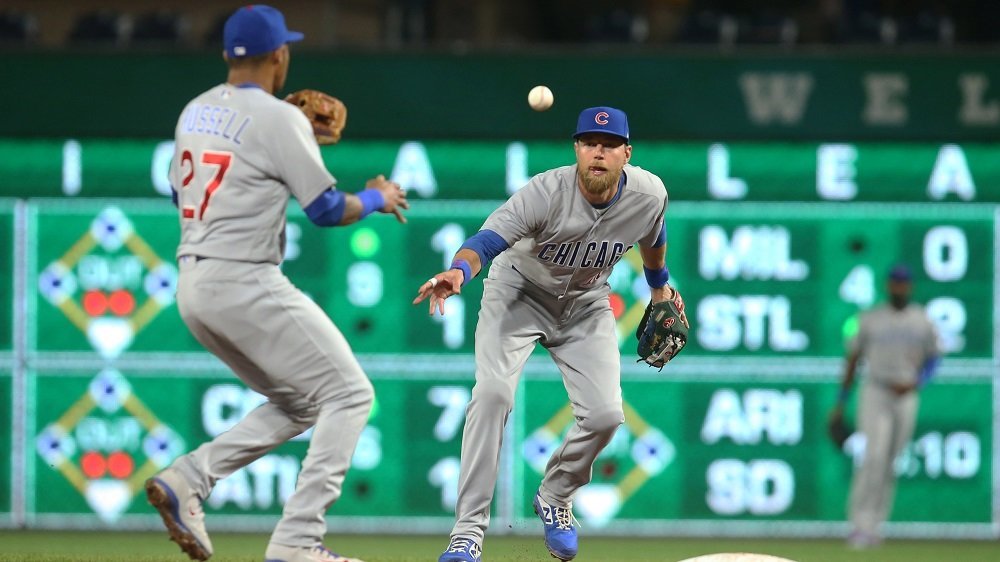 PITTSBURGH — Even in the midst of baseball's power-hitting golden age, it is still possible for old-fashioned defensive struggles to take place in Major League Baseball every now and then. In the case of the first two games of a four-game series between the Chicago Cubs (71-50) and the Pittsburgh Pirates (61-62), back-to-back battles of that nature took place.

After rain delayed the start of the contest by nearly two hours, the Cubs went on to win 1-0 by way of a solo home run for the second night in a row. The Cubs reaped the benefits of their stellar defense, which actually made history. Chicago tied a single-game record that dates back to 1969 by pulling off seven double plays in Friday's contest. Consistently thwarting the Pirates' scoring chances with their outstanding infield defense, the Cubs shut out Pittsburgh behind a solid appearance by pitcher Cole Hamels.

Making his fourth start as a Cub, Hamels improved to 3-0 after pitching a seven-inning gem, in which he gave up five hits and struck out three. Hamels, who currently boasts a 0.72 ERA with Chicago, has given up just two total runs in his four Cubs starts. He also served as one of only four Cubs to tally a hit on Friday.

In the top of the fourth, the sole scoring play of the ballgame occurred, as Cubs left fielder Kyle Schwarber hit a towering solo home run down the right-field line for his 21st dinger of the season. Ironically, the Cubs were hindered by a double play in the previous at-bat, which prevented Schwarber's home run from inflicting more damage on the Pirates. However, the Cubs turned enough double plays on the defensive side of the ball to hold off the Buccos.

One of the biggest home runs @kschwarb12 has ever hit at PNC Park. pic.twitter.com/K8azfelS3s

During the innings following Schwarber's home run, Chicago had four runners reach scoring position but failed to bring any of them home. As the final score indicates, neither team excelled with men on base. The Cubs left 18 stranded, and the Pirates left 15 stranded. Unfortunately for the Pirates, they did not come up with a big offensive play of any kind. With no extra-base hits on the night, the Bucs lived and died by small ball.

Pittsburgh was granted an opportunity to tie the game in the bottom of the ninth when Corey Dickerson led off with a single and then advanced to second base on a wild pitch by Cubs reliever Steve Cishek. However, Cishek composed himself and fanned Starling Marte for the first out of the frame. After that, Jesse Chavez came on in relief for the Cubs and, following a walk, forced the Pirates into a game-ending double play that tied the big-league record.

Pirates starting pitcher Trevor Williams, who attended the same high school as Hamels, earned the loss and fell to 10-9 record-wise. Entering Friday's start having given up just two runs over the course of his past five outings, Williams allowed a mere four hits and two walks in seven innings on the hill, but a lack of run support did him in. As for Chavez, who was acquired by the Cubs earlier in the season, he garnered his first save as a Cub.