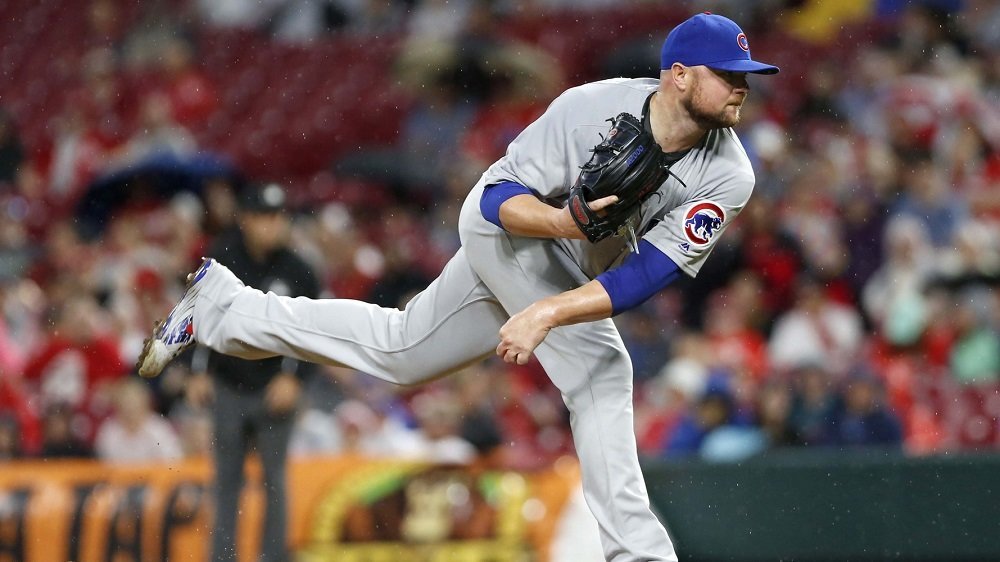 CINCINNATI — Refreshed after a rainout on Thursday and an hour-and-a-half-long rain delay on Friday, the Chicago Cubs took an early 3-0 lead on Cincinnati Reds starting pitcher Homer Bailey and did not look back, winning 8-1 at the Great American Ballpark.

The Cubs' hitters clearly responded better to the rain delay than Bailey, taking him for three runs in an opening inning that saw Chicago earn five consecutive hits to start the game. Following a Ben Zobrist single and a Kris Bryant double, Anthony Rizzo tallied his first hit in nearly a week on a single that scored Zobrist.

That marked the first of three straight lined singles for the Cubs, as Willson Contreras and Addison Russell singled after Rizzo reached base, culminating in a 3-0 advantage for the Cubbies. Boasting men on second and third with no outs at that point, the Cubs could have easily opened the floodgates, but they failed to get the ball out of the infield for the remainder of the inning.

Bailey entered the game with an 8-3 record in 18 career starts against the Cubs, but he lived up to the 5.59 ERA that he carried with him into the start, giving up 10 hits and five walks as part of a dismal six-run outing in 4.2 innings pitched.

The Cubs went three up, three down in the second but returned to their hot-hitting ways in the third, picking up another run after getting three singles in a row to begin the inning. Contreras, who went 3-6, and Russell, who went 4-4, each singled, and, after an ensuing walk of Kyle Schwarber, Cubs second baseman Javier Baez drew in a run on a double-play groundout. Russell's stellar night at the plate, which included one RBI and one run scored, served as his fourth career four-hit game.

Chicago chased Bailey from the game in the fifth by accruing two more runs to go up 6-0. After Russell led off with a single, Schwarber earned his 18th RBI of the season on a double to deep center that scored Russell from first. A few at-bats later, with runners on the corners, Lester laid down a perfect bunt, which he is known for doing, and scored Schwarber on the sacrifice. Soon afterward, Bailey, who dropped to 1-6 with the loss, was yanked to bring his miserable start to a close.

On the flip side, Lester pitched well, collecting his second straight winning decision to move to 4-1. Reds left fielder Adam Duvall scored the lone run off Lester, hitting a solo bomb just over the wall in left-center to lead off the bottom of the fifth. Lester gave up just two hits and one walk in six innings on the hill.

The Cubs added two additional runs in the later innings. Baez amassed his National League-leading 37th RBI on an infield single in the eighth that scored Rizzo. Then, in the ninth, Reds second baseman Scooter Gennett misplayed a ball hit by Rizzo, enabling Cubs outfielder Albert Almora, Jr., to score on the error.

Chicago's Ian Happ, who went 1-2, experienced a rather unique evening at the plate, becoming the first Cub to get intentionally walked three times in a game since Andre Dawson in 1990. Interestingly enough, that 1990 game came against the Reds.

Defeating the Reds (15-30) by a score of 8-1, the Cubs (23-18) used a 13-hit advantage against their divisonal foes to run away with it in the Queen City. Multiple Cubs hitters accrued six at-bats on the hot-hitting night for the North Siders, and four of them tallied multiple hits in the 15-hit showcase by the Cubs.

Despite the persistent drizzle that lingered for most of the ballgame, the Cubs remained on fire from start to finish, putting together one of their most impressive victories of the year.