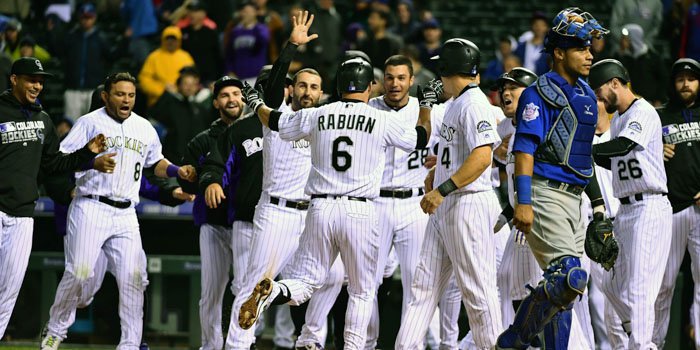 DENVER -- The Cubs' bullpen struggled, giving up leads several times in a 7-6 loss to the Colorado Rockies in an 11 inning, rain-delayed game on Friday evening.

Chicago took the lead 6-5 in the top of the 11th inning on a RBI single by Dexter Fowler and turned the game over to flamethrower Aroldis Chapman for the save in the bottom of the inning.

Nick Hundley singled off Chapman and then Ryan Raburn hit a double off the wall to score Hundley. Javier Baez's throw to the plate sailed into the Cubs' dugout and Raburn was awarded home and the game.

Cubs manager Joe Maddon argued that Raburn should have been awarded one base but the play is a judgment call and not reviewable.

The loss spoiled another great outing from Kyle Hendricks who pitched six innings of one-run ball and left the game with a 5-1 lead. Hendricks has allowed three or fewer runs in each of his last 16 starts dating back to May 22nd and is the fourth Cubs starting pitcher in the last 30 years to allow three or fewer runs in 16 consecutive starts (Jake Arrieta [29, 2015-16], Mike Morgan [27, 1992] and Frank Castillo [23, 1994-95]).

Dexter Fowler recorded his sixth leadoff home run of the season and the 20th of his career. His six leadoff home runs this season are tied for third-most in Cubs history. Addison Russell also hit his 15th home run in the six inning.

The Cubs will try to rebound on Saturday at 7:10 p.m. CT when Mike Montgomery (1-1, 3.12) will get a start for the Cubs against a Rockies pitcher to be announced.