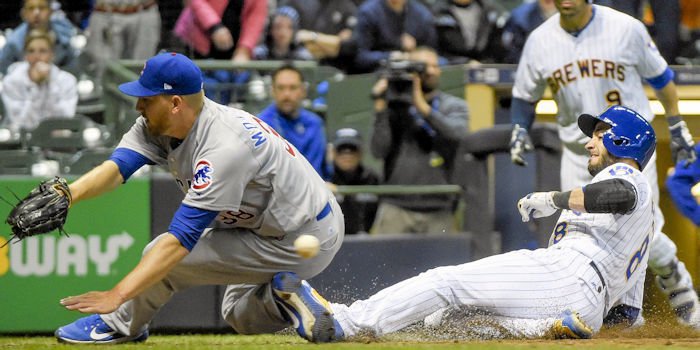 The Milwaukee Brewers (2-3) defeated the Chicago Cubs (2-2) 2-1 after a Mike Montgomery's wild pitch scored slugger Ryan Braun with the bases loaded. Braun said during postgame interviews that it takes "almost perfect baseball" to beat the Cubs.

The Cubs hitters only had six hits in the entire game but did manage to strikeout out a dozen times. The only run came from Ben Zobrist's solo homer in the second inning.

The big news of the game was Javy Baez's injury as he exited the game in the bottom of the sixth inning after a collision with center fielder Jason Heyward on a shallow blooper in the outfield. Heyward's knee slammed into Baez's head and he was twisted in the air for a few moments.

Baez left the field under his own power after a discussion with manager Joe Maddon but was clearly shaken up on the play.

Chicago Cubs officials said that Baez has a left eye contusion and he is day-to-day. He said during postgame interviews that he's "fine" and that he wanted to stay in the game.

"It got me very good, but it wasn't the elbow or the knee," Baez said. "It was very scary."

Good news for Cubs fans because this certainly had the makings of a much more serious injury. This was the one-year anniversary of Schwarber's collision in the outfield with Dexter Fowler where he suffered his ACL injury.

Kyle Hendricks will take the mound on Saturday at 6:10 CT against lefty Tommy Milone at Miller Park.