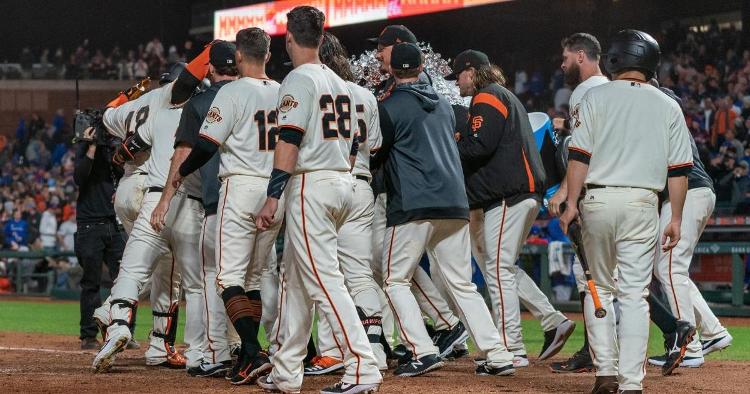 SAN FRANCISCO — Staying up well past their bedtime, the Chicago Cubs (54-47) engaged in a grueling West Coast duel with the San Francisco Giants (52-50) on Tuesday night that lasted 13 innings and ended in walkoff fashion. The Cubs overcame a late 2-run deficit to force extra innings but were unable to advance a single runner into scoring position in the bonus frames. A game-ending solo home run by Giants third baseman Pablo Sandoval ended the contest at Oracle Park, as the Cubs fell to the Giants by a final score of 5-4 for the second game in a row.

The Cubs finished with nine hits, and star slugger Kris Bryant had three of them in his 3-for-6 showing at the dish. Bryant also made an impact on defense, as he played three different positions on the night. Enabling the Cubs to strike first, Bryant plated shortstop Javier Baez with an RBI single in the top of the first. Baez hit a double in the preceding at-bat. After the Giants tied the game at 1-1 in the bottom of the second, the Baez-Bryant duo came through again, with Bryant scoring Baez from third with another RBI base knock.

Right-hander Yu Darvish started on the mound for the Cubs, and he faced off against Giants ace Madison Bumgarner. Outside of a troubling fourth inning, Darvish pitched fairly well in his six innings of work, in which he struck out six. As for Bumgarner, he struck out seven over the course of his 7-inning outing and, like Darvish, came away with a no-decision. Giants left fielder Alex Dickerson proved to be a thorn in Darvish's side on the evening by tallying two impactful extra-base hits off him.

Dickerson led off the bottom of the second with a double to deep right-center. Soon afterward, Dickerson tagged up and scored from third on a sacrifice fly by right fielder Mike Yastrzemski. Cubs left fielder Kyle Schwarber made a valiant effort on his throw home, but Dickerson was able to beat out catcher Victor Caratini's tag attempt. The Cubs retook the lead in the second, with Baez manufacturing a 2-out rally via his baserunning acumen. After beating out a throw to first for an infield single with two outs, Baez proceeded to steal both second and third, which set the stage for Bryant to drive Baez home for the second time in the affair.

Scoring his second game-tying run, Dickerson powered out a 372-foot solo to left in the fourth. Darvish enabled the next three batters to all reach base after that, including center fielder Kevin Pillar, who cranked a 2-run double that hit off the bottom of the wall in left-center and put the Giants ahead 4-2. Both teams then cooled off at the plate for a few innings until the Cubs recorded a run in the seventh. Outfielder Jason Heyward led off with a double to deep right-center and scored thereafter on an RBI single off the bat of Caratini.

The North Siders went on to even the score in the eighth, with Bryant inciting his club by way of a 1-out double. Bryant advanced to third on a groundout, and following a walk, the Giants made a pitching change. Giants reliever Tony Watson was unable to escape the jam after stepping onto the hill, as Heyward made his mark again with a game-tying RBI single to right that came with two outs. Subsequently, San Francisco led off the bottom half of the eighth with a walk, which led to a pitching change.

The J-Hey renaissance continues... and we are here for it! pic.twitter.com/nzjcgQwzJt

Unlike the Giants, the Cubs reaped the benefits of their eighth-inning pitching swap, as reliever Brandon Kintzler collected three outs, two of which came on an inning-ending double play, in short order once he toed the rubber. Meanwhile, Bryant, who started the game at third base before being moved to left field in the seventh, was repositioned to right field prior to the start of the half-inning, and he made the most of his defensive realignment by pulling off a superb diving catch on a liner hit by Giants catcher Buster Posey for the first out, thereby helping Kintzler's cause.

What can't Kris Bryant do? Our mentions are open pic.twitter.com/FEpjQpMGri

Unfortunately for Chicago, Bryant's impressive snag was the last notable feat experienced by the Cubs in the game. Offensively, the Cubs failed to garner a legitimate scoring chance the rest of the way, with a single tallied by Caratini in the 12th serving as the Cubs' lone hit of extra innings. Pillar nearly ended the battle in the Giants' first plate appearance of extras, as he led off the bottom of the 10th with a double that hit off the very top of the wall in left-center. Cubs reliever Steve Cishek loaded the bases in the 10th, but, after drilling Posey in the leg with an errant pitch, he collected himself and forced Sandoval to hit into a groundout that allowed the Cubs to escape the jam.

Sandoval redeemed himself quite conspicuously the next time that he stepped into the batter's box, with "Kung Fu Panda" delivering a knockout blow by taking Cubs reliever Brad Brach deep on a 356-foot walkoff dinger that sailed just over the wall in left in the bottom of the 13th. Coming with one out, Sandoval's fifth career walkoff long ball was reviewed, as it bounced back into the field of play after descending into the bleachers, and the home-run ruling was quickly confirmed, thus bringing the 13-inning war to a close with the Giants coming out on on top 5-4.