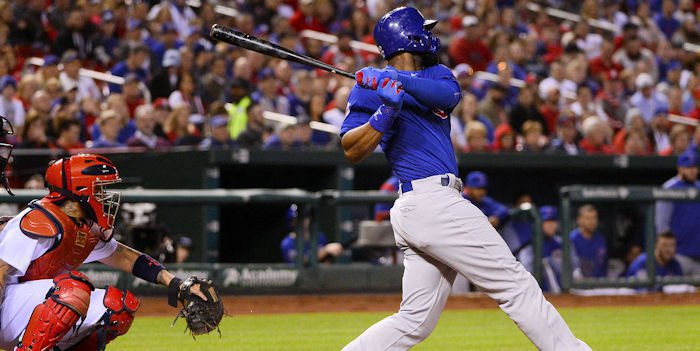 Jason Heyward collected two vital RBI in the Cubs' victory on Friday and now boasts 23 RBI on the year.

CHICAGO -- The Chicago Cubs (26-27) came back from an early 2-0 deficit on Friday afternoon to defeat the division rival St. Louis Cardinals (26-25). Ending a miserable six-game stretch in which the Cubs lost every game and were practically listless offensively, Chicago won 3-2 on Friday behind a solid performance from first baseman Anthony Rizzo. Rizzo scored two runs, including the winning run, and collected one hit and three walks. Chicago avoided allowing yet another shaky early-inning showing by pitcher John Lackey to extend their losing streak, as they made the most of their five hits and experienced success with runners in scoring position, which served as a pleasant change from their recent performances.

Cardinals center fielder Dexter Fowler returned to Wrigley Field for the first time since the 2016 World Series, and the former Cub received his championship ring prior to the game. That happy nostalgia quickly faded, though, as Fowler hurt the Cubs with a leadoff home run to start off the game. A regular occurrence this season, the early-inning home run given up by Lackey put the Cubs in a 1-0 hole. The homer to right was Fowler's only hit of the afternoon.

Lackey's struggles worsened in the next inning, with a wild pitch by him allowing a Cardinals runner to move into scoring position and score later on the inning. The runner, Aledmys Diaz, began the second inning with a single and took second on the wild pitch. A few at-bats later, Magneuris Sierra hit a bloop single that enabled Diaz to score.

The Cubs were impotent offensively until third baseman Kris Bryant stroked his 12th homer of the year in the third. Coming against Cards starter Lance Lynn, Bryant hit perhaps the easiest home run of his career, as an effortless swing on a pitch thrown right down the middle barely cleared the ivy-covered wall in center to make the score 2-1. The long ball marked Bryant's first hit of the 2017 slate against the Cardinals, ending an 0-14 stretch against the Cards.

Lynn next found himself in trouble in the bottom of the sixth, as he walked two batters to put runners on first and second with one out. Lynn finished with a solid line of two hits and four walks to his name in 5.1 innings pitched. His ERA increased, however, as his replacement on the bump, Tyler Lyons, gave up an RBI double to Jason Heyward of the Cubs not long after entering the game. Heyward, who finished the game 1-3 with two RBI, tied the game up at two runs apiece with his double to deep right that scored Rizzo.

That tandem of Heyward and Rizzo teamed up to produce more magic for the Cubs in the bottom of the eighth, as Rizzo scored what proved to be the winning run on a sacrifice fly by Heyward. Trevor Rosenthal, the former closer for the Cardinals who was relegated to middle relief earlier this season, entered the game to begin the half inning and was victimized by Rizzo at the start. The slugger boomed a double to deep left and coasted into second base standing up. Thereafter, Rizzo made a gutsy decision to advance to third on a groundout, which paid dividends in the ensuing at-bat. It was then that Heyward hit a sky ball to deep center that was too deep for Fowler to threaten Rizzo with a throw home.

With Rizzo tagging and scoring from third, the Cubs led for the first time all game, and their 3-2 advantage stood. Cubs closer Wade Davis made quick work of the Cardinals in the bottom of the ninth, going three up, three down to earn his 11th save of the season and secure the win for the North Siders. Despite his early struggles, Lackey put forth a solid outing, striking out six and allowing four hits in seven innings pitched. Reliever Pedro Strop earned the win, though, moving to 1-2 overall. The second game of this three-game series at Wrigley Field will commence tomorrow afternoon at 1:20 PM CST.