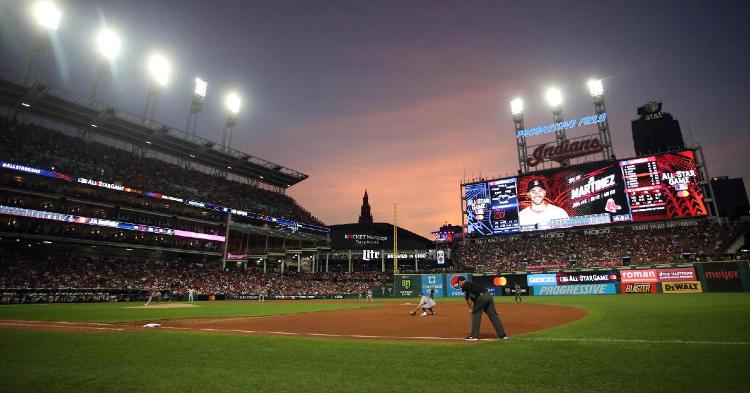 The American League defeated the National League 4-3 at the 90th installment of the Midsummer Classic. (Credit: Charles LeClaire-USA TODAY Sports)

CLEVELAND — For the seventh consecutive year, the American League triumphed over the National League in the MLB All-Star Game. Tuesday's Midsummer Classic at Progressive Field, the home venue of the Cleveland Indians, featured consistently stellar pitching and occasional spurts of offensive excitement. In the end, the American League team won 4-3, defeating a National League squad that included three members of the Chicago Cubs.

During player introductions, four members of the Cubs' 2016 team that defeated the Indians in seven games to claim the World Series crown were booed by the Indians supporters in attendance, with the pain of the Indians blowing a 3-1 lead in the series still afflicting the Cleveland faithful. Cubs shortstop Javier Baez and Cubs catcher Willson Contreras made their second career All-Star appearances, and they both started for the National League for the second straight year. Cubs third baseman Kris Bryant also suited up in the exhibition, as he served as a reserve for the National League in what marked his third career All-Star nod.

In addition to the aforementioned Cubs trio, New York Yankees closer Aroldis Chapman, who was the hero of the Cubs' bullpen in the 2016 Fall Classic, was also serenaded by the boo birds prior to the start of the game. As for injured Los Angeles Angels second baseman Tommy La Stella, who was a utility man for the 2016 Cubs, he avoided being booed, but it might have been purely out of sympathy, considering that he was on crutches due to a recently suffered broken leg and was therefore unable to play in the game.

The 90th edition of the All-Star Game was fairly uneventful for the Cubs players involved, with Baez, Bryant and Contreras all failing to collect a hit. Baez and Contreras each went 0-for-2 with a strikeout apiece, and Bryant, who played in left field, struck out in his lone plate appearance of the night. They were all booed while stepping up to the plate for their at-bats, and Chapman, who entered the game with a save opportunity on the line in the top of the ninth, was even booed when gearing up to pitch for the team that the fans in the stands were rooting for.

Former Indians and current Houston Astros left fielder Michael Brantley put the American League on the board with a 2-out RBI double that plated a teammate of his, Astros third baseman Alex Bregman, in the bottom of the second. Brantley was met with a chorus of cheers by his former home crowd upon being introduced when the starting lineups were called out, and he received an even louder ovation when he drove home the opening run. Similarly, Yankees starting pitcher CC Sabathia, a longtime Indians great, was a special guest at the game, as he is set to retire at the end of the season. In addition to throwing out the ceremonial first pitch, Sabathia made a symbolic mound visit in the ninth, which brought forth a standing ovation from the fans, players and coaches alike.

Yankees catcher Gary Sanchez led off the bottom of the fifth with a double and was later scored on an infield single by Minnesota Twins shortstop Jorge Polanco, which put the American League up 2-0. Colorado Rockies center fielder Charlie Blackmon cut the National League's deficit in half by way of a 384-foot solo home run hit out beyond center with two outs in the top of the sixth. The American League went on to take a 4-1 lead in the bottom of the seventh, with Oakland Athletics third baseman Matt Chapman drawing a leadoff walk and eventually coming home on a ground ball. Following a pitching change, Texas Rangers left fielder Joey Gallo showed off his slugging power by smoking a 397-foot solo blast out to right on the first pitch thrown to him.

New York Mets first baseman Pete Alonso, who won the MLB Home Run Derby on Monday, answered with a clutch 2-out single in the top of the eighth that pushed two runs across the plate, but, with runners on second and third, Milwaukee Brewers third baseman Mike Moustakas then popped out to the catcher to end the inning and leave a pair of baserunners stranded. The National League failed to present a scoring threat in the final frame, as Chapman earned the save by striking the side out swinging and securing the American League's 4-3 victory.

Since not a single batter tallied multiple hits in the contest, Indians starting pitcher Shane Bieber was named the MVP of the All-Star Game at his club's digs for nothing more than pitching a flawless fifth inning, in which he sat the National League down in order via three strikeouts. The American League unit improved to 45-43-2 in the event, which has now been won by the American League seven seasons in a row. Yankees starting pitcher Masahiro Tanaka received the winning decision, and Los Angeles Dodgers starting pitcher Clayton Kershaw was issued the losing decision.