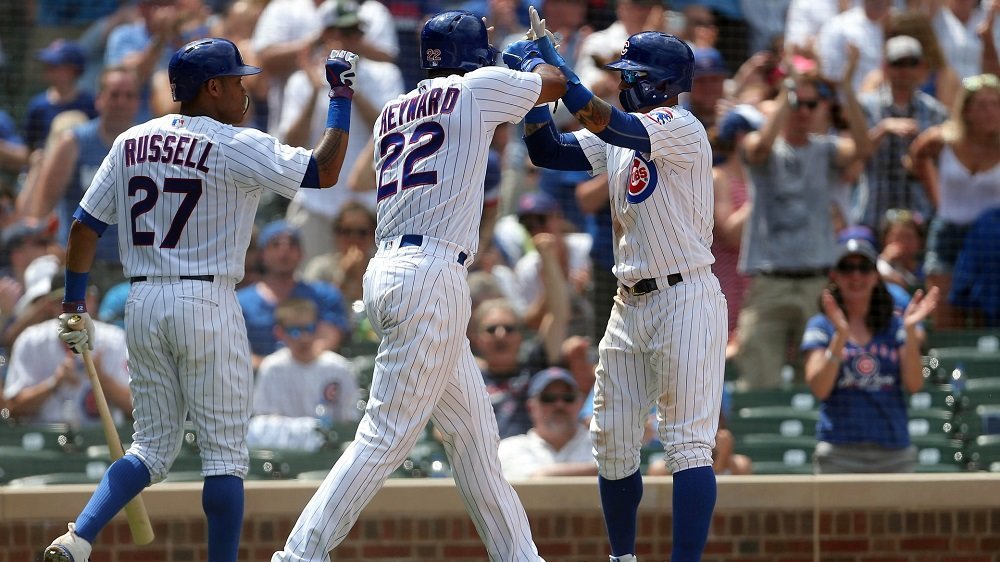 The Chicago Cubs tallied 20 hits, 17 of which were singles, in an impressive display of hitting prowess. (Photo Credit: Dennis Wierzbicki-USA TODAY Sports)

CHICAGO — The Chicago Cubs produced their second consecutive offensive outburst in a victory over the Minnesota Twins on Saturday. Unlike Friday's contest, in which the Cubs hit four home runs, Saturday's contest featured plenty of small ball from the North Siders. Winning the exciting game, which featured a combined 31 hits, by a final score of 14-9, the Cubs scored their first nine runs on nothing but singles and walks, as Chicago did not record an extra-base hit until the seventh inning. Hitting 17 singles in total, the Cubs wreaked havoc on a Twins pitching staff that suffered its second straight rough outing at the Friendly Confines.

Just like they did in the first game of the series, the Twins took an early lead over the Cubs on Saturday. First baseman Joe Mauer hit a three-run double in the second inning. Entering the series with just 13 RBI on the season, Mauer has tallied eight RBI through two games against the Cubs. The Cubs evened the score in the next inning, converting five singles into three runs. First baseman Anthony Rizzo picked up his 55th RBI on a hit that scored center fielder Albert Almora, Jr., and left fielder Ben Zobrist obtained two of his three RBI on the day with a two-run single that scored right fielder Jason Heyward and second baseman Javier Baez.

In the fourth, the Cubs took a 4-3 lead on a sacrifice fly by Almora, Jr., that scored third baseman David Bote. Minnesota retook the lead in the fifth by way of a two-out rally. Cubs starting pitcher Tyler Chatwood forced the first two outs in a mere five pitches but proceeded to give up three hits and two walks before earning the third out. Twins left fielder Eddie Rosario hit a two-run home run, and shortstop Ahire Adrianza hit an RBI single.

The two-out rally that the Twins produced in the top of the fifth paled in comparison to the Cubs' two-out rally in the bottom half of the same inning. Scoring five total runs to go up 9-7, the Cubs scored four of those runs on two-out singles. The first run came on a sacrifice fly by Zobrist that scored Rizzo from third. A few at-bats later, Bote drove in catcher Willson Contreras on a single to center. Ian Hipp then pinch hit for Chatwood and slugged a one-run single to center. Almora, Jr., and Heyward proceeded to produce back-to-back RBI singles after that. Almora, Jr., was pulled for a pinch runner in the inning after experiencing leg cramping. He went 3-3 in his three plate appearances.

Chatwood's outing ended with a sorry stat line of seven runs on seven hits and three walks. True to form, though, despite his struggles, Chatwood accrued an impressive total of six strikeouts in just five innings of work. Twins pitching was fairly bad across the board. Making his first start of the year after being called up from the minors a few days ago, Minnesota pitcher Adalberto Mejia was charged with four runs on six hits in four innings. Twins relievers Zach Duke and Addison Reed were responsible for the five runs scored by the Cubs in the fifth.

The Twins were able to rebound after the troubling bottom of the fifth, as they evened the score at 9-9 in the top of the sixth on a one-out sacrifice fly by third baseman Eduardo Escobar and a two-out single by outfielder Willians Astudillo. In the seventh, however, Minnesota reliever Trevor Hildenberger handed the Cubs a lead that they did not relinquish by giving up five runs on four hits and four walks.

After a leadoff walk in the bottom of the seventh, Happ hit a double to right for the Cubs' first extra-base hit of the afternoon. An intentional walk then loaded the bases and set up Heyward to hit an RBI single to right. Heyward led all batters in the contest with four hits in a 4-6 plate performance. Baez knocked in two runs with a double to center, putting the Cubs ahead 12-9. A few at-bats later, Contreras hit a sacrifice fly, and, later in the inning, shortstop Addison Russell brought home the Cubs' 14th and final run on a single to right that scored Baez.

With 20 hits on the day, the Cubs collected a hit at every spot in the batting order, and seven different Cubs accrued multiple hits. With a total of 11 hits, the Twins were not too shabby at the plate, either, but, for the second day in a row, an offensive explosion by the Cubs did Minnesota in. The Cubs have now scored 10 or more runs in three straight games for the first time in 15 years.

In the 14-9 Cubs victory, Chicago reliever Justin Wilson garnered the win to move to 2-2, and Hildenberger was handed the loss to fall to 1-2. Standing at 46-35, Chicago is in the midst of an impressive three-game win streak after losing six of seven in a very unimpressive fashion. The Cubs can sweep the Twins, who are 35-44, with a win at Wrigley Field tomorrow afternoon.